Football
News
Their 3-1 win over Turkey in Baku gives the Swiss a chance of progressing from third spot
Conor Keane
18:55, 20 Jun 2021

A Xherdan Shaqiri masterclass was enough to secure a crucial win for Switzerland to keep their hopes of qualifying for the knockout stages of Euro 2020 alive. The creative midfielder scored a brace as well as dictating the game in what was Switzerland’s best attacking showing in the tournament so far as they beat Turkey 3-1 in Baku.

The Liverpool attacker was a constant nuisance to the Turkish defence, who simply could not get near him. He was able to pick up the ball in deep positions as well as find pockets of space to exploit and punish a very frail Turkish defence. Shaqiri was the player picking up the ball and splitting the Turkish defence to create numerous chances for his side and his excellent performance paid dividends beyond the personal reward of two goals.

As well as dictating the tempo of the game, Shaqiri scored an excellent brace with two outstanding finishes to extend his side’s lead twice. His goals were thoroughly deserved for his excellent performance which Switzerland were crying out for after their very poor display against Italy last time out. With four points and a minus-one goal difference to end their group stage campaign, the Swiss have set themselves up to have a strong chance of being one of the four third-placed sides to make the round of 16.

Yann Sommer was called into action early to deny a powerful volley from Kaan Ayhan as Turkey applied the pressure early on. Moments later, Switzerland opened the scoring through an excellent low strike from Haris Seferović into the bottom-right corner, leaving Uğurcan Çakir scrambling. 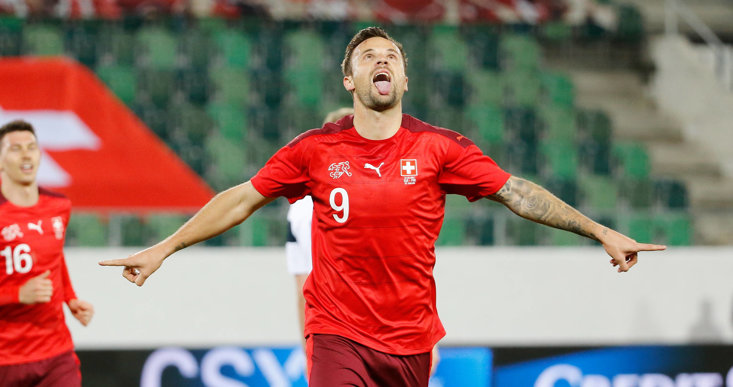 Turkey pushed for a quick equaliser and Mert Müldür’s strike on the left side of the box was parried away by Sommer. Shaqiri extended the Swiss lead with a curling effort from just outside the penalty area, and he almost doubled his tally after Turkey’s defence were caught sleeping, Shaqiri was played through with just the goalkeeper in his way but Çakir did well to deny the Swiss attacker.

Looking to find a way back into the game, Turkey were applying more pressure in the final third and Sommer had to be quick to react to parry Müldúr’s powerful effort. Müldür almost pulled a goal back with a dazzling solo run, only to be denied by Sommer again.

After the break Zuber had a chance to set up Breel Embolo but instead went for goal himself and it was a comfortable save for Çakir. Embolo was next to be denied by Çakir, who was doing all he could to keep his side in the game. Seferović came close to scoring his second of the game but Çakir did brilliantly to get down and knock the ball past the far post.

Turkey did manage to score with a brilliant strike to give themselves a ray of hope as ĺrfan Can Kahveci’s curling effort nestled in the top-left corner. However, it was not to last as Shaqiri fired in his second goal of the game to keep their qualifying hopes alive. Granit Xhaka almost got in on the goal-fest late on with a free-kick from just outside the area rattling the right post.

Switzerland finish third in Group A after Wales' narrow defeat to Italy in Rome, and will be hoping that their four points prove enough to better at least two of the five other third-placed teams in order to progress.