Snooker
News
The 2015 champion is struggling with injuries and opened up to The Sportsman
Hector Nunns
16:05, 11 Jan 2022

It wasn’t just the pain of a disappointing Masters first-round defeat to Barry Hawkins that was troubling Shaun Murphy late on Monday night at Alexandra Palace.

The loss was irritating enough, the 2015 champion at the prestigious invitation tournament for the world’s top 16 going down 6-2 to Barry Hawkins – having led 2-1 and then squandered opportunities to make that 4-1 before the 2016 finalist Hawkins stole frames four and five and then made it five on the spin to seal his place in the quarter-finals.

But afterwards a gloomy Murphy bared his soul about the neck and back pain that is in his words “seriously limiting my career”, admitting the flare-ups are lasting longer, and that not being able to practice for any length of time has left him feeling like “an impostor” when out there competing against the elite of the sport.

Problems affecting the back and neck are not new for snooker players. Even if there are not other underlying and pre-existing conditions exacerbated by the thousands of hours of practice and tournament play, the unnatural demand of moving the neck upwards when in position to make the shot and sight down the cue towards the cue ball can take a grim toll.

Murphy said: “As it stands, today, right at this moment, it is having a career-limiting effect on me. Maybe not quite career-ending at the moment, but certainly career-limiting.

“I honestly can’t remember the last time I played a match completely pain-free, and that eats into your patience and tolerance when you’re out there – things you really need. It’s not just a game of snooker going on, it’s mental warfare. And so if you are playing in pain it does have an effect.

“And then a knock-on effect of that of course is that I am not able to do the five, six, seven hours a day practice that I know some of the other guys are doing. And you can see in my game that I am just not as sharp as everyone else.

“I no longer think about what it would actually be like to play without pain, not in a dreamy way any more. I have had the problem for many years and the flare-ups when it comes on strong are lasting for much longer. 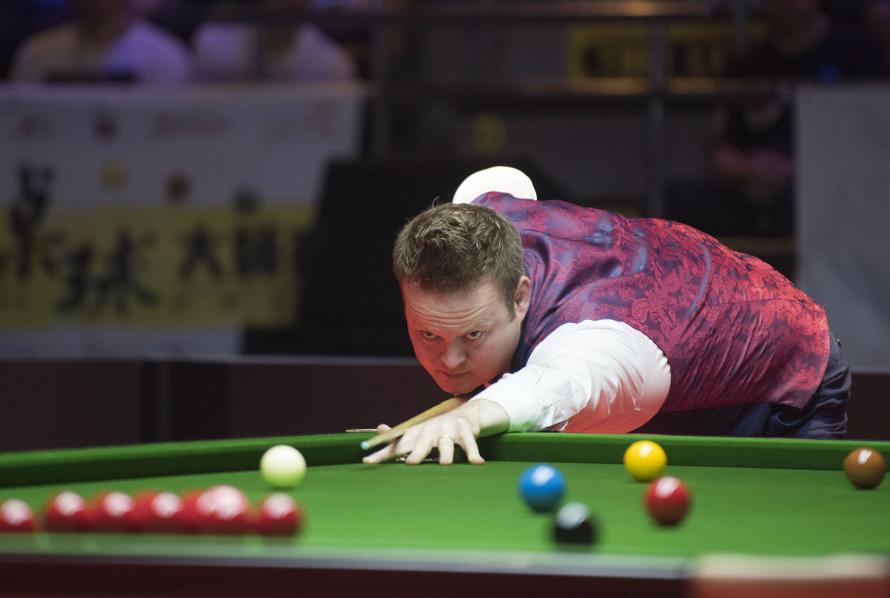 “And without trying to sound too downhearted about it, I have lost a little bit of hope where that is concerned. It is hard to play in pain, and hard to put in the necessary hard work to compete with the best players. At the moment I feel like an impostor out there – like I don’t really belong at the top end of the game.

“I know the rankings don’t lie, but I don’t feel like a top player, or a danger to some of these guys when I rock up to tournaments, because I haven’t been able to put the time in to be able to compete.

“Listen, I know what works – constant hard manipulation of the problem areas on a regular basis frees the problem up. But we are not football clubs or top tennis players or golfers. We don’t have the financial capability of travelling around on tour with a physio, chiropractor, chef, driver and all the things they do.

“Sure, a top snooker player earns decent money – but we don’t have staff. If I could have a full-time travelling physio, I would. But I can’t, and so I have to manage it as best I can.”

Murphy is still a relatively young man at 39 with a young family, and is therefore clearly anxious that the situation does not deteriorate further for personal and work reasons. To have a physio devote say 20 weeks of their year to a single player might cost around £30,000, beyond the reach of almost everyone on tour.

If the problem is as pervasive as it appears, it could even be an idea for World Snooker Tour or the WPBSA to pay for and have someone on site for at least the bigger events with bookable slots for treatment.

World Snooker Tour
@WeAreWST
Barry Hawkins has beaten Shaun Murphy 6️⃣-2️⃣ to reach the quarter finals of the @CazooUK Masters.
The Hawk preserves a 100% record against the Magician in this event [3/3] #CazooMasters 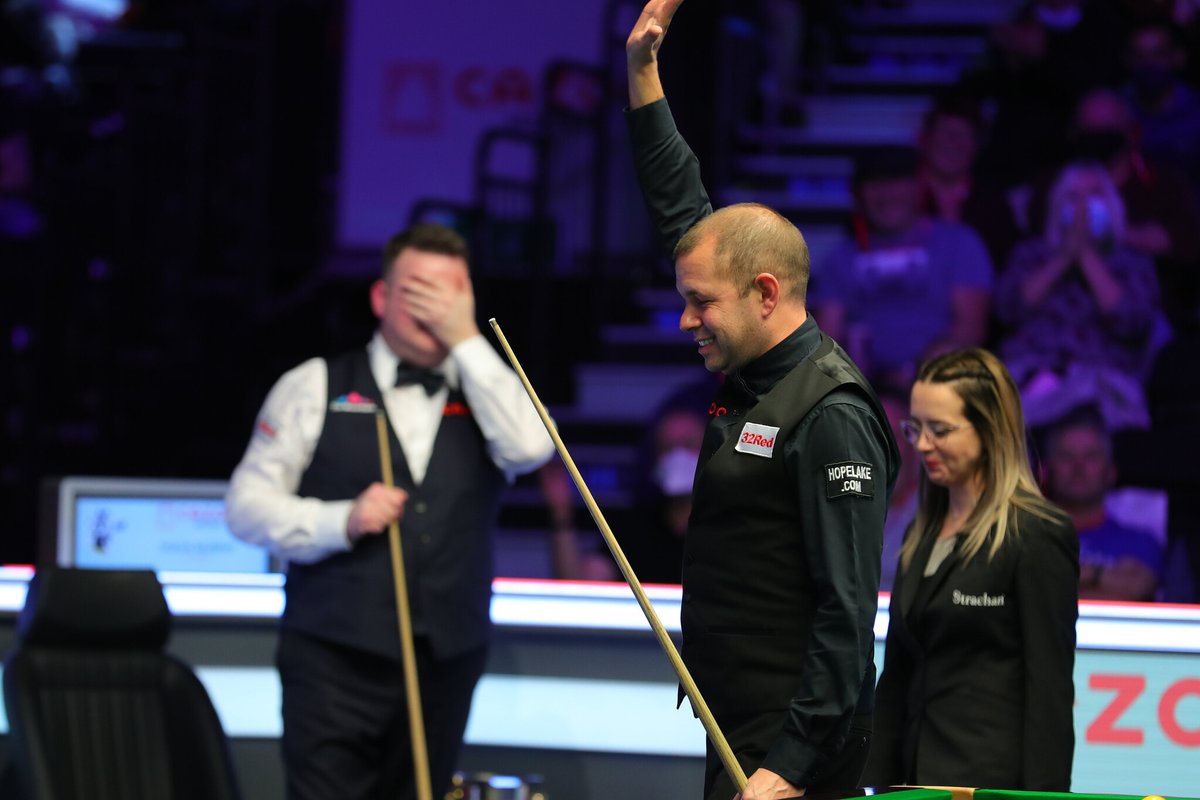 One person snooker players have turned to is John Cox, who operates a sports therapy practice with 5,000 patients out of Pontefract in West Yorkshire where he provides among other things sports massage and acupuncture with a specialism in the relief of back pain. He has also treated performers from the musical acrobatic Cirque de Soleil shows.

Cox, explaining the particular strains that a snooker career places on these areas of the body, said: “Nature putting our bodies together didn’t take snooker players into account bending over a table and then raising their head. It can affect your spine, but also your gluteal muscles and hamstrings and create a lot of problems in shoulder, necks, and lower back – often muscles.

“The head is a fifth of your body weight so lifting it up so many times at that angle over 20 years takes it toll. You are designed to be upright. In one case I treat as an example the player as he bends down can twist his head, rotate his spine, pulling on his shoulder, through his ribs into his back. As a young lad you get away with it, but as you get older you are less supple.”

Murphy’s recounting in 2018 of how bad the injury was on the morning of the 2015 Betfred World Championship final and that he contemplated withdrawing altogether did not go down well with Stuart Bingham, his victorious opponent in that Crucible showpiece.

Responding testily, Bingham said: “It is the first time it’s ever come out. Surely if you have a bad back the morning of playing you would have made it known back then. To say it three years later doesn’t make sense to me.”

However acute the issue may or may not have been on that particular day, there is little doubt that Murphy’s condition has been there for many years and if anything is getting worse. He is not alone. And the more the authorities can do to assist players in the area, the better.

x
Suggested Searches:
Manchester United
Liverpool
Manchester City
Marcus Rashford
Premier League
More
snooker
15-Year-Old Schoolboy Wildcard Stan Moody Is A Shoot Out Sensation
Schoolboy Stan Moody claimed a sensational debut big-tournament victory at the quickfire Shoot Out on [ ... ]
snooker
Peter Devlin Raps On Stage Alongside Jessie J In Snooker Shoot...
Peter Devlin hopes he can perform on the Shootout stage as well as he did with singer Jessie J earlier [ ... ]
snooker
18.5m Viewers And Upside-Down Glasses: Dennis Taylor Ruled Snooker...
Snooker may never quite see another high-watermark like the 1985 World Championship final with its 18.5million [ ... ]
snooker
Neil Robertson: Other Tournaments Need To Match Incredible Ally...
Neil Robertson has urged the Crucible crowd to up their game as a spectacular Masters spectacle this [ ... ]
snooker
Neil Robertson Builds On Australian Ashes Success With Masters...
Neil Robertson piled Masters success on Ashes misery as the latest Australian to demolish England’s [ ... ]
snooker
Barry Hawkins Digs Deep To Book Masters Final Showdown With...
Barry Hawkins took his place in the Masters final after coming through yet another Alexandra Palace [ ... ]
snooker
Paul Hunter: The Great Man The Masters Trophy Is Appropriately...
Among many poignant moments at the 2022 Masters at Alexandra Palace, one perhaps stood out above all [ ... ]
snooker
Robertson Wins Masters Thriller To Reach Final But Celebration...
Neil Robertson produced an astonishing comeback to reach the Masters final by beating Mark Williams [ ... ]
snooker
World Number One Mark Selby To Seek Help Over Mental Health...
World No1 Mark Selby has revealed he will be seeking help over the current state of his mental health. [ ... ]
snooker
Neil Robertson Vows To Jump In Icy Alexandra Palace Lake If...
Neil Robertson has vowed to jump into the icy Alexandra Palace boating lake if he wins a second Masters [ ... ]
snooker
Judd Trump Insists Masters Atmosphere Is More Like Boxing Than...
Judd Trump laid out rival Kyren Wilson with a series of hammer blows on Friday – and then insisted [ ... ]
snooker
Masters 2022: Williams Edges Out Old Rival Higgins In An Alexandra...
Both Mark Williams and John Higgins testified to one of the most extraordinary atmospheres ever seen [ ... ]
snooker
Neil Robertson: Ashes and Michael Jordan Inspired Me Against...
Australia’s Neil Robertson took inspiration from both the Ashes and sporting legend Michael Jordan [ ... ]
snooker
Kyren Wilson Relishing Masters Clash With Rival Judd Trump
Kyren Wilson became the second man to scrape into the Masters quarter-finals on Wednesday – as [ ... ]
snooker
Judd Trump Edges Into Quarter-Finals But Mark Allen Still Smiling...
Mark Allen was still smiling on Wednesday night despite an agonising Masters final-frame defeat to Judd [ ... ]
snooker
Masters 2022: Snooker’s Class Of 1992 Still Thrilling Crowds...
All three of snooker’s famous Class of 1992 of Ronnie O’Sullivan, John Higgins and Mark [ ... ]
snooker
Ronnie O'Sullivan Wows Rolling Stones Pal Ronnie Wood With Masters...
Ronnie O’Sullivan wowed Rolling Stone Ronnie Wood as the Rocket got his bid for an eighth Masters [ ... ]
snooker
Ranking The Five Greatest Masters Finals - Featuring Williams,...
There were some near misses, and I have chosen to leave out the superb comeback victory for a 39-year-old [ ... ]
snooker
Masters 2022: History-Making Higgins Books His Place In The...
John Higgins made history when he walked out against reigning UK champion Zhao Xintong at the Masters [ ... ]
snooker
Fired-Up Mark Williams Defeats Wayward Defending Masters Champion...
Defending Masters champion Yan Bingtao had a bad start to his Sunday, getting lost while being [ ... ]
snooker
The Constant Uncertainty Surrounding Djokovic Could Impact His...
Detained and then isolated at Melbourne Airport on arrival from the Middle East, Novak Djokovic has [ ... ]
snooker
Steve Davis Looks Back At His Stunning Masters Win Over O’Sullivan...
Steve Davis still believes his last major tournament win owed plenty to a streaker breaking Ronnie O’Sullivan’s [ ... ]
snooker
Changing Of The Guard: China’s Hopes For Snooker Domination
When Ding Junhui burst onto the snooker scene in spectacular fashion in 2005, many expected the Chinese [ ... ]
snooker
Masters Preview: Can Chinese Whizkid Yan Bingtao Defend His...
Snooker’s big guns will be out in force for this year’s Masters (9-16 January) and for defending [ ... ]
snooker
Ken Doherty - 25 years On From His Greatest Triumph At The Crucible
Ken Doherty will head back to the Crucible Theatre later this year to celebrate the 25th anniversary [ ... ]
snooker
Snooker’s Original ‘Grinder’ Cliff Thorburn Ready To Call It...
Snooker’s original ‘Grinder’ Cliff Thorburn admits he is finally ready to pack away [ ... ]
snooker
Graeme Dott Believes Stephen Hendry Will Be ''Much Better''...
Former world champion Graeme Dott has backed Scottish snooker legend Stephen Hendry to do some serious [ ... ]
snooker
World Number One Mark Selby Won’t Rest While There’s Still History...
Mark Selby insists there is no chance he will ever rest on his snooker laurels while there are titles [ ... ]
snooker
750-1 Upsets, Breakout Stars & World Class Wins: Snooker's Best...
Snooker like all sports to a greater or lesser degree was hit by the Covid pandemic in 2021 – [ ... ]
snooker
Ronnie O’Sullivan – What Changing Of The Guard?
If there is indeed a changing of the guard taking place in snooker, then someone clearly forgot to tell [ ... ]