Rugby League
News
The 35-man team will be put through their paces at Leeds Beckett University
Elliott Bretland
16:03, 06 Apr 2021

England head coach Shaun Wane has named his 35-strong squad for the training session on April 13 at Leeds Beckett University as he gears up for his first physical session with his players since being appointed over a year ago.

The Wall of White kick off their Rugby League World Cup 2021 campaign against Samoa at St James’ Park on Saturday October 23 and with six months to go, Wane now has the opportunity to assess his team with June’s mid-season international against the Combined Nations All-Stars also on the horizon. Seven NRL-based players have been called up and, while they won’t be at Leeds Beckett, they will have regular contact with the coaching team.

Salford Red Devils’ Kallum Watkins returns after the last of his 25 caps at the 2017 World Cup final against Australia, while St Helens skipper James Roby has been included at the age of 35. Six Saints players have been named in the squad along with six from Warrington Wolves and five Wigan Warriors representatives.

Leeds Rhinos centre Harry Newman is the youngest player in the squad at 21 years of age. He is currently working his way back to fitness following a leg break in 2020, but Wane insists the injury is no barrier.

“I rate Harry Newman very highly,” the England head coach said. “He’s a good chance of playing in the World Cup. We’ve got real strength in depth at centre – and at hooker and wing too. 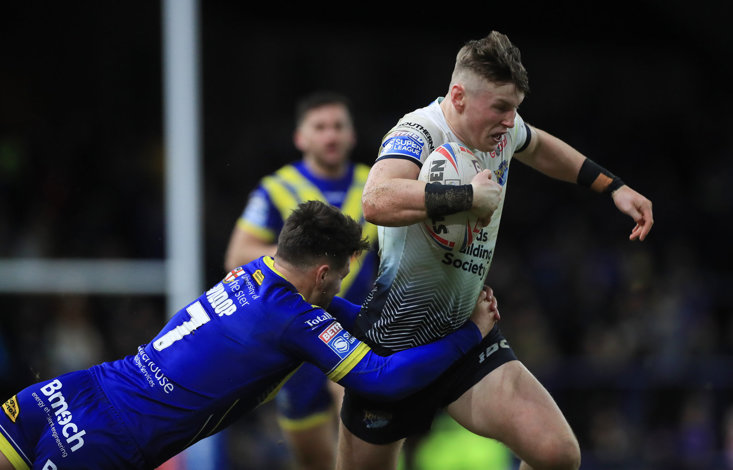 HARRY NEWMAN IS THE YOUNGEST MEMBER OF THE SQUAD AT 21

“Names will come and go as the season unfolds, but the 35 players I’ve named reflect my current thinking. They are all capable of playing to an England standard. They know what’s expected at international level and the heights they must hit.

“We have a good mix of youth and experience, and age is no barrier. The thirty-somethings in the squad are playing some good rugby. And if a 17-year-old puts his hand up and shows me he’s got what it takes, he’ll be in.

“I watch every Super League game, every week, multiple times and I’m seeing some good things so far from England players. I keep a very close eye on the NRL too. Those players can’t join us at Leeds Beckett, but I’ll make sure they get the same information as the players who can.

“The session at Leeds is all about introducing players to my systems – how we’ll defend, how we’ll attack and so on. They are some of the best players around and they’ll get it very quickly. It’s an important part of our preparation for the mid-season international against the All Stars and for the World Cup too.”

Tickets are on sale now via the RFL website, priced £20 for adults and £10 for under U16s. An initial 4,000 tickets are available, with the hope that further areas of the stadium will become available as social distancing requirements ease.

The Squad In Full