One player does not make a team, but there’s little doubt that the arrival of Alan Shearer at Ewood Park on July 27th, 1992, was a huge factor in Blackburn Rovers winning their first top-flight title in 81 years.

Rover’s transition from second-flight strugglers to Premier League supremos didn’t happen overnight; the club, under the ownership of local businessman and lifelong fan Jack Walker, had been carefully constructing a side capable of competing with the best for a number of years.

In 1992 established names such as Mike Newell, Colin Hendry and David Speedie had seen Kenny Dalglish’s side promoted to the top flight for the first time since 1966 and further big names like Tim Sherwood, Graeme Le Saux and Stuart Ripley would follow with the promise of Premier League football.

But it was the signing of Alan Shearer which would ultimately propel Blackburn into the realms of genuine title challengers and silence the doubters, who had been quick to dismiss them as purely a rich man’s plaything.

Shearer had made his name at Southampton, famously scoring a hat trick on his league debut against Arsenal in 1988 aged just 17-years and 240 days, before going on to become one of the most sought-after strikers in the country.

Already capped by England, it was no surprise when he completed a then record £3.6million move to Ewood Park in a deal that easily eclipsed the £2.9million Liverpool paid Derby County for Dean Saunders just 12-months before.

At the time the move had raised more than a few eyebrows with a number of top sides, including Manchester United, reportedly keen on acquiring his services – but speaking many years later the striker explained why he opted for Blackburn.

"Once I'd spoken to Kenny Dalglish, Ray Harford and to Jack Walker, when you put those three together, it was going to be pretty good," he said.

“It was a football club that was going in the right direction and their plans were pretty big, so I knew it was going to be good.”

Shearer wasted little time in justifying his huge price tag, scoring twice in a 3-3 draw on his Rovers debut at Crystal Palace on the first weekend of the newly formed Premier League season.

He added another 20 goals before his campaign was cruelly cut short by a cruciate ligament injury that December, only to continue in the same blistering form when he returned for the following season to find the net another 34 times.

Not surprisingly, his remarkable return coincided with an unprecedented period of success for Rovers and, having finished fourth and then runners-up to Manchester United in their first two seasons back in the big time, in 1995 Shearer’s 34 goals in 42 games helped fire the club to its first league title since 1914. 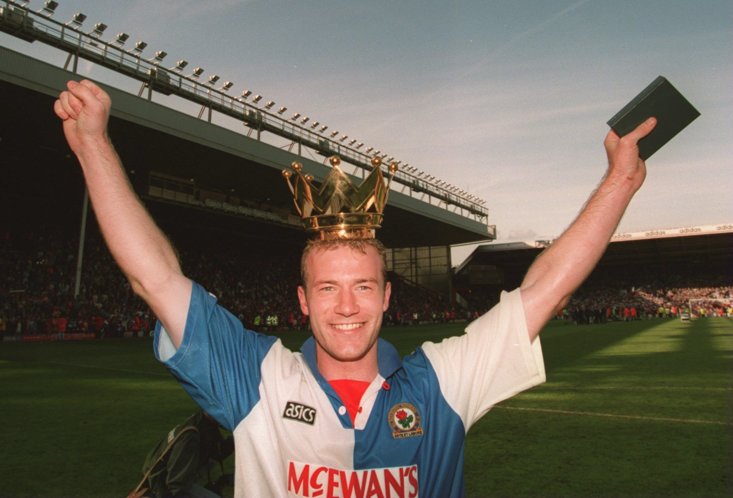 His prolific partnership with Chris Sutton, who had joined from Norwich, and the ammunition provided by Jason Wilcox and Stuart Ripley, all played a significant role in the title success while Shearer was voted the PFA Players’ Player of the Year by his peers.

But as Shearer’s stock continued to rise, Blackburn’s fortunes began to wane and that Premier League title success of 1995 was as good as it got as Kenny Dalglish took-up the role of Director of Football with his assistant Ray Hartford being put in charge of first-team affairs.

A weak title defence followed, along with a miserable showing in Europe and in the summer of 1996 Shearer departed Ewood Park for Newcastle United for another record fee of £15million - resisting the interest from champions Manchester United for his hometown club.

During his time at Ewood Park Shearer made 171 appearances for Blackburn, scoring 130 goals while inspiring the club to glory they could have only dreamed of just a few years prior his arrival.

Incredibly, that Premier League title win in 1995 remains the only major honour Shearer won in the game, despite going on to become the Premier League’s most potent marksman by finding the net an astonishing 260 times.

Modest as ever, though, Shearer prefers to think of that astonishing achievement as a team success rather than something that was built on the back of his impressive personal contribution following his arrival in 1992.

“It was a team that had unbelievable spirit,” he would claim some years later. There were probably better teams than us out there but what got us through, in the end, was our great team spirit.”