If Team GB’s Dina Asher-Smith is going to win Olympic gold in the women’s 100m sprint this summer, she is going to have to beat Shelly-Ann Fraser-Pryce.

Betfred make the Jamaican a 4/5 favourite to add to her 100m triumphs in Beijing in 2008 and London in 2012, with Asher-Smith available at 6/1 to become the first British woman to win gold at this distance. Elaine Thompson-Herah is another Jamaican with her eyes on the centre of the podium and, at 2/1, will no doubt have a part to play when the final takes place on Saturday 31st July.

However, there is no denying that Fraser-Pryce is the one to beat, as success in Tokyo would see her become the first woman to win one individual Olympic track and field event three times. She has big race pedigree, and even at the age of 34, has clocked the fastest time of this season with a hugely impressive 10.63.

Asher-Smith is expected to become the first Team GB women to reach the final of the 100m since Jeanette Kwakye in 2008, and with American Sha’Carri Richardson absent after testing positive for marijuana, her chances of standing on the podium have been given a significant boost.

In Fraser-Pryce, our British contender is facing a phenomenal competitor, who often saves her quickest times for the big stage. 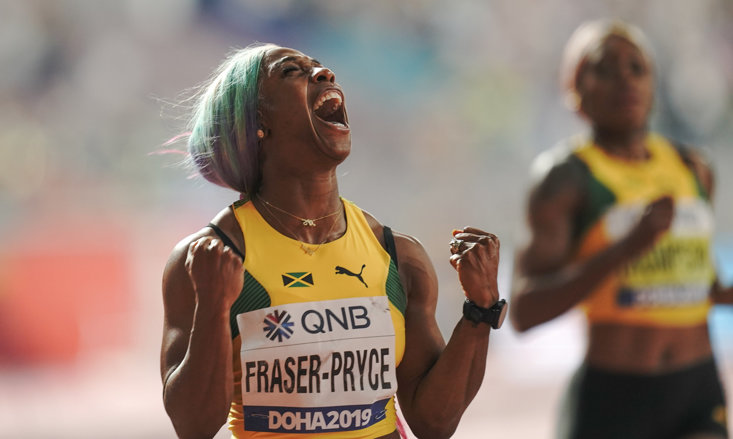 In Fraser-Pryce, our British contender is facing a phenomenal competitor, who often saves her quickest times for the big stage.

Despite her recent two-year break after giving birth to her son, the Kingston native recorded the quickest 100m time in the women’s race since Florence Griffith-Joyner’s world record of 10.49 back in 1988.

The Jamaican’s blistering time of 10.63 is not only the second quickest ever run, it came just two months after Richardson had recorded a 10.72 in Florida. Fraser-Pryce is not one to lie down and accept defeat, and has proven so time and time again in her illustrious career.

She has made a habit of shattering her own staggering times, managing a stunning 10.70 in 2012 after recording 10.73 at the 2009 World Championships. That June time of 10.63 seconds will take some beating, but in reality, if she comes close to her best, she is likely to take home the gold medal.

The sprint king is backing his compatriot to make history in Japan and join him in winning three Olympic 100m titles.

“I personally feel that Shelly is the only person who can lose this race,” the 34-year-old claimed. “I hope she doesn’t put too much pressure on herself going in because she’s in shape, she’s in form, all she has to go is go out there and execute and it shouldn’t be a problem.”

He isn’t usually, but for the sake of Asher-Smith’s chances, let’s hope he is wrong.