Boxing
News
'The Gypsy King' protected the throne with the best punch he has ever thrown. But is this really the end?
Joey Mills
22:49, 23 Apr 2022

Tyson Fury ended Dillian Whyte’s world title dreams with perhaps the greatest punch he has ever thrown to retain the WBC, The Ring and lineal heavyweight championship of the world. The fight was messy, spiteful and, at the conclusion, brutal. ‘The Gypsy King’ maintains he will retire from the fight game. He insists it could never get any better than this. His decision to walk away seems premature, but after being roared on to a spectacular sixth-round knockout win in front of 94,000 fans at Wembley Stadium, you can’t argue with him when he says there are few more glorious endings a ring career can have.

The entrances seemed to sum up the two men more succinctly than any amount of build-up histrionics. Dillian Whyte entered in understated, relaxed fashion, the bopping of his head being his only concession to nervous energy. Fury’s entrance opened with a specially recorded video of Don McClean belting out ‘American Pie’, segued into the champion riling the crowd up to a Notorious B.I.G. classic. As Kings Of Leon informed us their sex was indeed on fire via an unexpected needle drop, Fury briefly sat in a gaudy throne before jogging the final stretch of Wembley turf to the ring. Styles make fights, but it would appear they also do a nice line in entrances.

The opening round was a cautious feeling-out process for both men. The evening’s first major surprise, if you don’t include Don McClean, was Whyte shaping up as a southpaw. The pair circled mostly in a low-action round, but Fury landed a firm jab two minutes in. ‘The Body Snatcher’ tried to find the champion’s midriff, but was out of range. A late right hand made Whyte think after he missed a left hook in the final minute.

The second saw Fury start as a southpaw, while Whyte returned to his usual orthodox stance. This turned out to be mind games from ‘The Gypsy King’ who soon reverted to working behind a left jab. He found some success with it, while Whyte could only push him back onto the ropes rather than punch him back onto them. Fury nicked the round with a sharper jab, and a right-hand warning shot.

There were no stance dramatics in the following stanza. Whyte’s lack of head movement was starting to look like a real problem. The Brixton banger was easy pickings for Fury’s spearing jab, having his head rocked back on a number of occasions. The lineal ruler began to mix body shots into his arsenal, with a couple of right hooks cannoning off the ribs of the challenger. 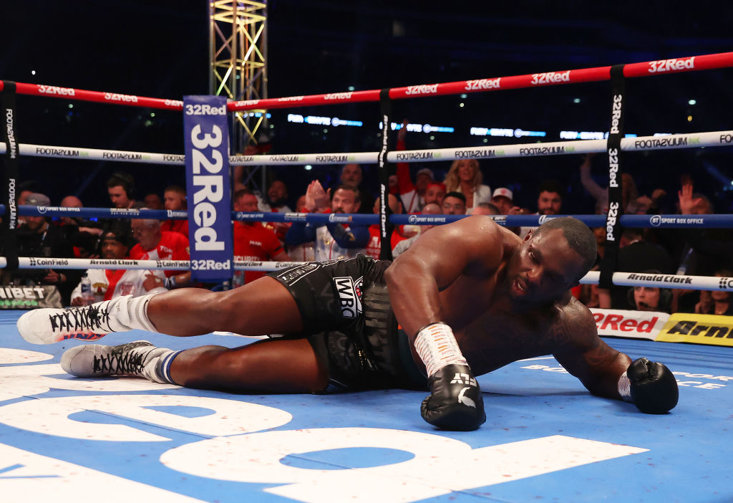 The blue touchpaper was lit in a bitter fourth round. Whyte seemed resigned to the fact that his only recourse was to make the boxing match into a street fight. The most impressive Queensberry Rules exhibition came from the champion, who executed a great left-right combination, and a number of hurtful body blows. But a clash of heads opened a cut on Whyte’s eye, and the pair wrestled into the ropes and exchanged rabbit punches. Whyte’s villainy led one audience member to throw a drink at the fighters.

The fifth round began with both men getting a talking to from the official, and they respected his pleas for calm. Whyte got a couple of solid body shots away, before Fury responded in kind. The first sign of vulnerability in either combatant came about when a left-right combo seemed to cause Whyte’s knees to buckle temporarily. The first warning that the world champion possessed enough power to end his challenger’s hopes.

The sixth round continued in the same vein. Whyte following Fury, presenting too willing a target while not providing enough to dissuade the ‘Gypsy King’. ‘The Body Snatcher’ once again found Fury’s body with single shots, but found far too many jabs and right crosses coming back in turn. As the clapper went to sound the end of the round, it seemed Fury could do this all night. Once he uncorked a spectacular uppercut, perhaps the finest punch of his career, it became clear he wouldn’t have to. Whyte went down like a demolished high-rise, laid flat by the most crisp, clean, concussive right uppercut you are ever likely to see. Whyte rose, to his immense credit, but as he laboured to settle his liquid legs, the referee rightfully waved off the contest.

If this is the last contest in Tyson Fury’s illustrious 33-fight career, it ended on perhaps the perfect punch. But surely this cannot be it, not when Britain’s most dominant heavyweight since Lennox Lewis has more mountains to climb. Not staying on to fight the winner of Oleksandr Usyk and Anthony Joshua’s summer rematch would be a lingering black mark on an otherwise unblemished legacy. There is no fighter quite like Fury, and boxing deserves to see him prove that one more time.