Football
News
Simply Undroppable - David De Gea Is One Of 12 Premier League Players Who Have Played Every Minute This Season
Simon Lillicrap
10:50, 13 May 2019

The Premier League season has finally come to a close after nine months of effort, skill and turmoil. Six Premier League managers have lost their jobs along the way but it was Pep Guardiola who lifted that trophy at the end of the campaign successfully defending the title - an achievement that had not been done for over a decade.

But which players have been there for their sides for every one of the 3420 minutes that make up a full season of top flight football? This exclusive club is made up of just three outfield players with goalkeepers less likely to be substituted even when they are performing poorly. Let’s take a look at those in between the sticks.

It will come as no surprise that the two best goalkeepers in the league have played every single second this season. Ederson got his safe hands on the Premier League trophy but it was Alisson who won the Golden Glove award in his first season in England. Elsewhere, David de Gea wasn’t dropped from the Manchester United goal even though his performances were way below par.

Other outstanding keepers retained their places every week such as Lukasz Fabianski, Neil Etheridge and Ben Foster - the three shot stoppers who made the most saves this season. England’s number one Jordan Pickford has gained more top flight experience playing every minute and Newcastle United have also found a reliable number one, in Martin Dubravka.

Pickford and Fabianski are the only two players to have completed every minute for the past two seasons.

Just three outfield players have been ever present in their sides’ Premier League campaigns this term, Conor Coady, Ben Mee and Luka Milivojevic. The Wolves captain has been a rock this season for a talented side and has made the step up from the Championship with ease. Although there have been bigger, more eye-catching names in Nuno Espirito Santo’s side this season, none have been more solid than his captain.

Burnley's Ben Mee has been reliable for Sean Dyche as Burnley battled their way to safety once again. The only midfielder to have played every minute this season is Crystal Palace’s captain and trusty penalty taker Luka Milivojevic. He has scored 12 goals this season, ten from the spot and played every single minute in the league this season under Roy Hodgson; a remarkable achievement.

Bournemouth centre-back Nathan Ake has had another great season but he misses out on this particular accolade by just eight minutes. He was subbed off at Old Trafford during a hectic Christmas period due to a slight injury but recovered to play a full 90 minutes just three days later.

Cesar Azpilicueta has been a reliable force for Chelsea over the past few seasons and under another new manager he proved himself once more. He was replaced by Davide Zappacosta against Brighton with the game already won in April.

PFA Player of the Year Virgil van Dijk missed his minutes in September at home to Southampton but his side were already 3-0 up and he was taken off as a precaution and replaced by Joe Gomez. 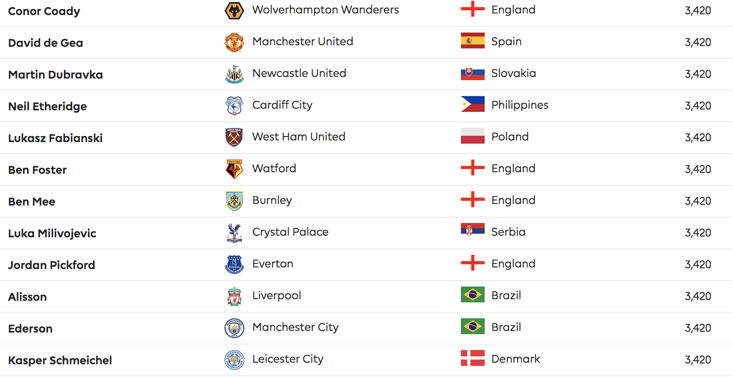