Football
News
We take a look back at the most iconic meetings between these two sides
Conor Keane
12:00, 25 Jun 2021

England v Germany. It simply doesn’t get any bigger than this. From a World Cup win to Gazza’s tears, this rivalry has given us every single emotion and to be honest, Germany have had the better of it when it comes to major tournaments.

There is simply no underselling this fixture because of the fierce history between the two nations and their round of 16 meeting will be a stellar fixture of Euro 2020. There have been some exhilarating encounters between these two sides over the years, so here is a look back at six of the best to add to the excitement of Tuesday night’s clash at Wembley Stadium.

Let’s start with the most recent agonising tournament defeat, which came in South Africa. Goalscoring machine Miroslav Klose opened the scoring for the Germans before Lukas Podolski extended their lead 12 minutes later. England were able to pull a goal back through Matthew Upson and Frank Lampard scored the famous goal that was not given which should have put England level at the break  – where was goal-line technology when you needed it?

Die Mannschaft were able to profit off of the linesman’s poor eyesight and they hit two more past the Three Lions in the second-half through Thomas Müller as England were eliminated. For a lot of young people whose first tournament encounter with Germany was this devastating loss, this is where the desire to get revenge on Tuesday spurs from. Meanwhile, goal-line technology was introduced by the time the 2014 World Cup rolled around. 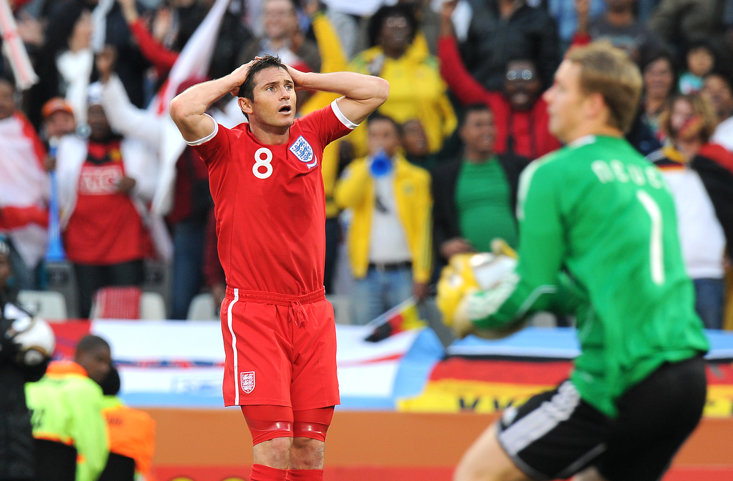 Lampard's goal was over the line in 2010

This was where England’s penalty heartbreak began as the Three Lions lost in the World Cup semi-final against a side that has proven to be a constant thorn in their side at major tournaments over the years. After a highly contested 60 minutes, Germany opened the scoring through an Andreas Brehme strike before Gary Lineker equalised late on to take the game to extra time.

Paul Gascoigne’s second yellow card of the tournament meant he would miss the final if England made it that far, and as he cried on the pitch, the nation were sobbing with him by full-time. Stuart Pearce and Chris Waddle missed their spot-kicks as England bowed out to Germany, and it would be 28 years before they reached another World Cup semi-final.

Three Lions, the birth of ‘It’s coming home’ and a nation swept up in tournament fever. This is the fixture that has now haunted England supporters for 25 years and six years after the heartbreak of Italia ‘90, they would once again fail from 12 yards after a stalemate between the two sides. Both goals came in the opening 20 minutes of the game through Alan Shearer and Stefan Kuntz but the game would go the distance, with Gazza inches away from converting what would have been a golden goal.

The penalty shootout that followed did not go according to plan and England were eliminated in the semi-finals on home soil by their old enemy, who went on to win the tournament. Current England manager Gareth Southgate will be haunted by his missed spot-kick and he will see this match up as a great opportunity to make amends, albeit from the sidelines this time around. On Tuesday, Wembley plays host again in a repeat of the Euro 1996 clash, in a game that will have fans all around the country hoping that England will finally get revenge on their continental rivals. The good results are coming, that is a promise.

One of England’s best performances in recent memory, and a starting eleven that after this impressive victory never played together again – what was Roy Hodgson thinking? Berlin’s Olympiastadion was the arena for this clash and just like the game in South Africa, Germany went two goals ahead through Toni Kroos and Mario Gómez. However, this England side had the resilience to turn this game around as they stunned the Germans in their own backyard as strikes from Harry Kane and Jamie Vardy pulled them back on level terms before Eric Dier popped up at the death to snatch the victory. It may have been a friendly but it was an incredible game, not just because of how well England played but because of the historic rivalry with Germany, a very welcome victory back home.

This is one of the games that England fans will never forget. Once again, an excellent English victory over Germany came on the opposition’s turf, this time in Munich. As you would expect Die Mannschaft opened the scoring through Carsten Jancker before young Michael Owen cancelled out his strike minutes later. Steven Gerrard hit a thunderbolt just before half-time to put the Three Lions in front before Owen completed a remarkable hat-trick after the break. The icing on the cake was supplied by Emile Heskey who heaped more misery on the German supporters who were simply well-beaten in one of England’s strongest international performances ever.

The one game between these two great footballing nations that England fans will never forget. The game which secured the Three Lions’ first World Cup with Wembley once again playing host to another incredible fixture. Similar to the Lampard strike that was not given in South Africa, England’s third goal saw the ball bounce downwards off the crossbar, but when it did not seem as transparent as Lampard’s, it was awarded to Geoff Hurst who of course famously scored a hat-trick in this game.

Martin Peters opened the scoring in the final but Germany responded instantly and they equalised within a minute through Helmut Haller. Hurst re-established England’s lead not long after and it seemed as though that was the goal that would crown the Three Lions as World Champions. Germany were determined to prevent this and they scored in the final minute of the game through Wolfgang Weber to take the game to extra time. England were able to find their second wind in extra time and Hurst’s two strikes were enough to bring glory to the entire nation.