Ole Gunnar Solskjaer remains trophyless as Manchester United manager after his side lost 11-10 on penalties to Unai Emery’s Villarreal in the Europa League final. In a game which gave him a huge chance to get that monkey off his back, United were so often devoid of ideas, and now he faces a huge spell in his managerial career following David de Gea’s vital penalty miss.

Next season is now critical to the whole Solskjaer project at Old Trafford. This club cannot afford to be without silverware for a fifth consecutive season, having last tasted success under Jose Mourinho in 2017 in this very competition. The side has made huge strides and developed under his tenure, but his lack of experience in these sorts of games seems to be preventing United from taking that next step. To lose out on the 22nd anniversary of his glorious night in Barcelona will have come as a particular gut punch.

United dominated the second half, but by the time the extra 30 minutes came about, Villarreal were back on top. Unai Emery has now won this competition on four occasions, and showed once again he has the tactical nous needed to win trophies. His side frustrated United, they sat deep and allowed the Reds to keep the ball, while his substitutions brought a renewed level of vigour to the Yellow Submarines.

Emery had used all five substitutes by the end of normal time while only Fred was called on from United’s bench before the 115th minute. United were in desperate need of energy, but Solskjaer decided to stick with the experience he had on the pitch rather than freshen things up. 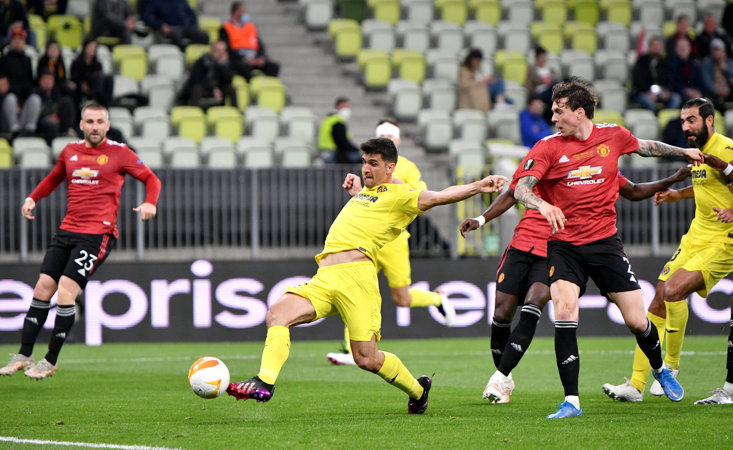 This tiredness came late on, long after Gerard Moreno, Villarreal’s main man, had deservedly made the breakthrough with his 30th goal of the season and his seventh in this season’s Europa League. That goal took the man who is likely to lead the line for Spain this summer to 82 Villarreal goals, moving him level with Giuseppe Rossi as the top goalscorer in the club’s history as Manchester United’s defensive frailties came back to bite them once again.

From a left-wing free-kick, it seemed the absence of captain Harry Maguire to organise their back-line was an obvious miss. Victor Lindleof failed to track the free man and Moreno was on hand to finish past David de Gea from close range and give the Spanish side the lead at the break.

As we have seen so often this term, half-time changes for United rarely mean Solskjaer actually turns to the substitute bench. Instead, tweaks are made, and motivation and urgency are injected into his team. The starting XI tonight, barring the injured Maguire, was clearly United’s best line-up - they just needed to produce on the pitch.

Things dramatically improved for United in the second half, and they had the chances to win it.

A goal-mouth scramble saw United escape just one goal down; however, from that moment Solskjaer’s side were well on top. They got their equaliser after a long-range shot from Paul Pogba was deflected into the path of Edinson Cavani, and the Uruguayan scored his 17th of the season.

Luke Shaw’s mishit cross found the head of Cavani and was blocked from close range as the Reds continued their second-half domination, but despite their superiority Villarreal held on and forced the game to extra-time. Given the last seven Anglo-Spanish European finals have been won by Spanish teams, a few doubts may have crept into those in red.

Villarreal pushed on in extra-time and by the end of an uninspiring 120 minutes it will have come as a relief to many that there was a penalty shoot-out to decide the game. But De Gea’s failure from 12 yards proved vital, and Solskjaer now finds himself embarking on a continued search for glory.