Luke Shaw was marauding forward with the ball to get Manchester United on the attack again and cut inside, assessing his options as he looked up. Marcus Rashford was hugging the left touchline and Mason Greenwood the right. Deep-lying midfielder Fred was the most advanced player. In that moment, it was clear what was the biggest reason the Red Devils were about to draw a blank against Chelsea at Stamford Bridge on Sunday.

It was a decent performance and United were full of energy and positive running. However, they lacked a focal point to tie it all together. They lacked a striker to play centrally, a centre forward to knit their attacking play. The man to give the one-twos, the man to give the opposition defence something to constantly think about.

Too often, when Bruno Fernandes surveyed the pitch in front of him as he looked to make things happen, his options were spaced out. The pass would be great but players in the final third were too isolated for United to make a sustained assault on the Chelsea goal. Rashford and Greenwood are great attacking talents but they like to buzz around and hover. They don’t have the discipline to stay in one area like selfish goalscorers do. They want to make things happen, they want to create.

Imagine even, Romelu Lukaku, the former Manchester United forward who scored for Inter just 32 seconds into his side’s 3-0 win over Genoa just a few hours earlier. The Old Trafford club have vastly improved since he departed for Italy, and he has too, but one can’t help but think the visitors would have been fiercely efficient with him in the side on Sunday. 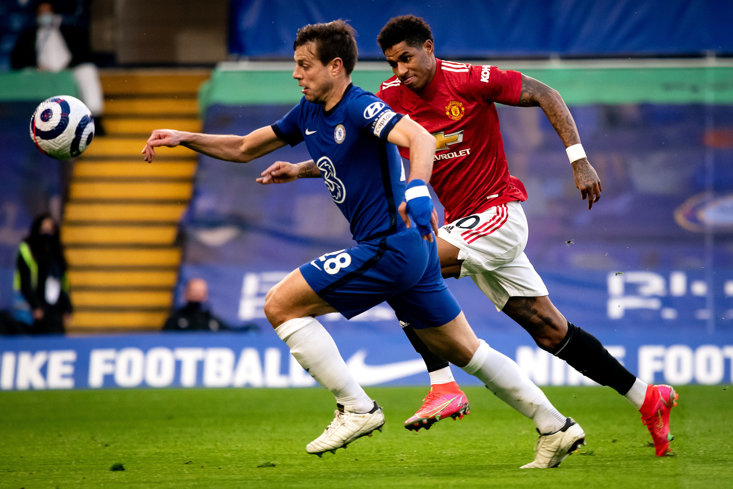 United have Anthony Martial, who came on with 10 minutes to play, but similarly to Rashford and Greenwood his positioning is too fluid. Edinson Cavani is the short-term answer, but at 34 he isn’t the long-term future of United’s attack.

Asked in 2019 about which type of striker he would like to sign to fill the void left by Lukaku, United boss Ole Gunnar Solskjaer responded: “I do like the one who scores scrappy goals, in and around the box, a young Ole or something. It doesn’t have to be a 1.95m forward, no, but maybe a different type to what we have.”

A young Ole would be great for goals off the bench but United need a focal point. They need a base up top. One that finds the net too would be huge, but having a talisman to carry out that centre-forward role would certainly aid Rashford, Greenwood and Martial too. The trio have just 14 strikes between them in the Premier League this season.

After Sunday's stalemate in west London, Solskjaer said, “We wanted to win. Apart from the last quality or pass being not good enough... we had great pressing, desire, work-rate... There was a great save by David de Gea and we got the clean sheet. That's what let us down, that quality on the ball. The first half was scrappy. Poor game really. But then we played some good stuff at times. When we settled we created a few chances but we didn't have enough."

What they lacked is a traditional number nine, a target man who can head the ball, hold it up and lead the line. This type of frontman is an essential purchase for the Red Devils this summer. It could really propel them from challengers to title hopefuls.