Tottenham were fortunate in the end but they needn’t have been. Boasting a supreme attacking trio in Son Heung-Min, Harry Kane and Gareth Bale, you would expect them to dispose of lowly Fulham, still stuck in the Premier League relegation zone, much more easily than they did on Thursday night. The fact Spurs ultimately won 1-0 at Craven Cottage because of a refereeing decision proves they were not firing on all cylinders.

Having taken the lead after Tosin Adarabioyo put through his own net following neat work from Son and Dele Alli, Spurs were under pressure at the start of the second half and the Cottagers were knocking on the door. Then it came, Josh Maja striking to level the scores. However, it was ruled out by a rubbish decision as the ball fell to Maja after striking Fulham team-mate Mario Lemina on the arm as it hung tight by his side. In the eyes of the law, it was correct to rule it out, but the hosts will still feel hard done to.

Spurs came away with the three points after surviving some scares later, but to see their attack it defies belief they are 23 points behind leaders Manchester City and nine behind Manchester United in second place. Their goals-for tally boasts a very healthy 42 goals and they only concede just over one goal per game but for some reason a consistent run of results just hasn’t come for Spurs. 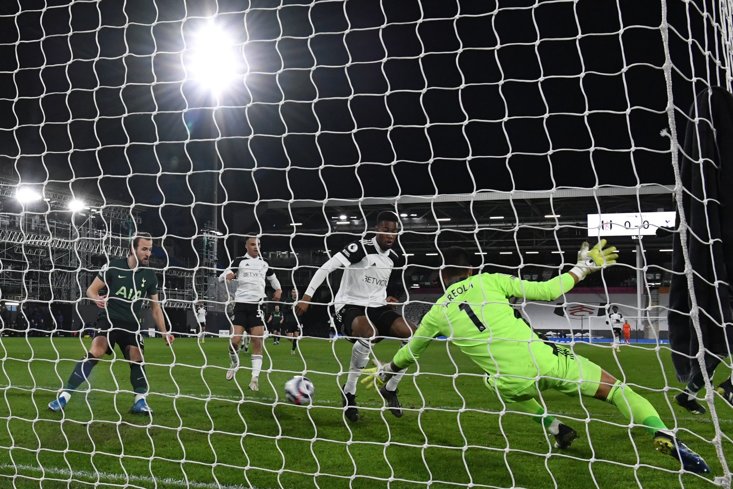 ADARABIOYO TURNS INTO HIS OWN NET FOR THE ONLY GOAL

Of course, it has been well documented that Bale is journeying back to his best and being eased in by Mourinho, and Kane and Son can’t be expected to be at their clinical and lethal best every single match, but it feels like Tottenham just aren’t clicking enough to get a proper run going. Behind the front three, a front three would give Sadio Mane, Roberto Firmino and Mohamed Salah a run for their money, Dele Alli is back in from the cold and record signing Tanguy Ndombele is enjoying a renaissance. However, it feels like Tottenham are still limbering up rather than playing at full pelt like Pep Guardiola’s City. They’re still getting warmed up, slowly easing themselves into the season with only 12 matches left.

Of course, a Mourinho side will always have questions posed over perceived negative tactics, and defensive football stifling the attacking side of the team, but Tottenham are just too rich up front not to start scoring goals for fun.

At Craven Cottage, seven minutes from the end, Kane was thwarted by Alphonse Areola in the Fulham net, and Lucas Moura skied the difficult follow-up. Tottenham just weren’t as clinical as they can be on Thursday but it was job done in the end.

The goals will come, and Tottenham will start to win in style on a consistent basis. Their attack will explode and be fruitful, but for now it’s a slow burner.