Matchroom Boxing supremo Eddie Hearn has labelled Saul ‘Canelo’ Alvarez’s September trilogy fight with Gennady Golovkin a bigger fight than the proposed undisputed welterweight showdown between Errol Spence Jr and Terence Crawford. It is certainly a bold claim, considering many fans have dismissed ‘Canelo’ vs ‘GGG’ as a bout that has come around too late. Meanwhile, Spence and Crawford are champions in their primes, unbeaten and in possession of every major 147lb title belt. On paper, the choice is clear for the discerning fan.

Eddie’s justification for favouring the Alvarez-Golovkin match is mainly financial. One can forgive him for that considering he will be promoting the fight. Speaking to the DAZN Boxing Show, Hearn compared the “terrible” 240,000 buys Spence’s bout with Yordenis Ugas did last April with the potential returns for the ‘Canelo’-’GGG’ three-peat.

“When you’re talking about a guy like Canelo Alvarez, who is consistently doing 600,000, 900,000, a million-two for this one [Golovkin] last time.” Hearn continued, “You’re talking about a global reach and recognition of global icons with the sport”. The promoter has a point, but fights are not measured in simple financial terms. Floyd Mayweather’s 2017 bout with Conor McGregor is the second highest-grossing boxing match in history. Would it make anyone’s list of the top ten biggest fights in boxing history? No, with the possible exception of McGregor’s.

Money is a factor, but nobody remembers the Thrilla In Manila because it sold a lot of pay-per-views. The significance of a fight is a deciding factor in appraising how big it is. In all the categories that matter, Spence vs Crawford has the advantage.

The proposed bout would see the two premiere welterweights on the planet meet, with all four world title belts on the line. Neither man has been beaten professionally, having eliminated a murderer’s row of world class fighters on the way to the pound-for-pound list. You have to go back to 2013 to find a date on which neither man was a reigning world champion, and neither man has had a bout without a world title on the line since 2016. In short, they are as dominant as they are well-matched. 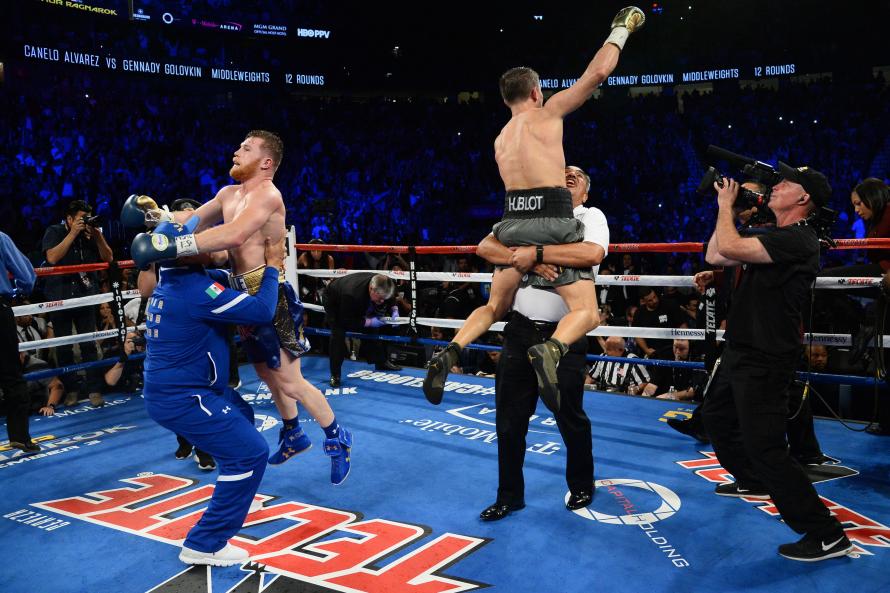 Meanwhile, Alvarez and Golovkin feels like a fight out of time. The pair shared two modern classics in 2017 and 2018. A pair of exciting, white-knuckle rides with controversial decision finishes, they drew their first meeting while ‘Canelo’ took a tight decision in the second. A follow-up in 2019 would have been the biggest fight in boxing. ‘GGG’ had every right to feel aggrieved, and the action was exciting enough to warrant a re-run.

But instead, Alvarez embarked on a move up to super middleweight and eventually light heavyweight. It is at the latter weight that he found himself last time out, losing for the first time in nine years. That points defeat to Dmitry Bivol for the WBA 175lb title was not a factor in Alvarez choosing to fight Golovkin next. This bout was set in stone even before ‘Canelo’ suffered perhaps the upset of the year.

Golovkin has won all four of his fights since the ‘Canelo’ defeat. In doing so he has unified the IBF and WBA middleweight titles. But despite these achievements, the legendary Kazakhstani has shown signs that, at the age of 40, time is catching up with him. He had a torrid time overcoming Sergiy Derevyanchenko via decision, and Ryota Murata was allowed to land significant leather on him before ‘GGG’ pulled out a stoppage. The sort of fighters Golovkin used to run through are catching up to him. While none have been good enough to beat him, ‘Canelo’ is a different matter. The Mexican is the only fighter to beat Golovkin in a 44 fight career, and he did so when ‘GGG’ was at his peak. In 2022, this fight simply looks too one-sided. Even if Golovkin does pull off the miracle, he is doing so against a fighter who was well-beaten by Bivol last time out.

Nobody is doubting the financial power of this trilogy fight, but there is more to staging a big fight than money. In every measurable way beyond dollars and cents, Crawford vs Spence would be bigger. Hearn is entitled to his opinion, but sometimes even the most successful promoter in modern boxing can be wrong.