Football
News
The Imps are one win from the Championship after holding off the Black Cats
Kris Voakes
17:28, 22 May 2021

Sunderland’s League One torture will extend into a fourth season after they failed to overturn a 2-0 first-leg deficit against Lincoln City on Saturday to exit the play-offs at the semi-final stage. Lee Johnson’s side pulled back the two goals they needed at the Stadium of Light only to see a Tom Hopper goal send Lincoln to next Sunday’s Wembley final against Blackpool.

The 3-2 aggregate defeats marks a second play-off failure in three years at this level for the Black Cats, who welcomed back 10,000 to their Wearside home on Saturday and had looked well on course to reward their loyal faithful with a trip to the national stadium next weekend when they scored twice in a truly dominant first-half performance.

Aiden McGeady’s cross from the left teed up Ross Stewart for an early first goal, and it should have been two when Lincoln gave away the ball at the back and handed Charlie Wyke a one-on-one with the keeper but the Sunderland top scorer took too long to get a shot away and was denied by a late block. He made up for it soon after though when McGeady whipped in another ball, and this time Wyke poked home to level the tie.

At that point it looked like the Black Cats would go on and strangle the life out of Lincoln but having failed to bag a third before the break they saw the visitors come out with a far greater attitude in the second half. And, after Regan Poole had headed against the bar with one great chance, Tom Hopper was left in acres of space to score his second goal of the tie and put the Imps back in front on aggregate. 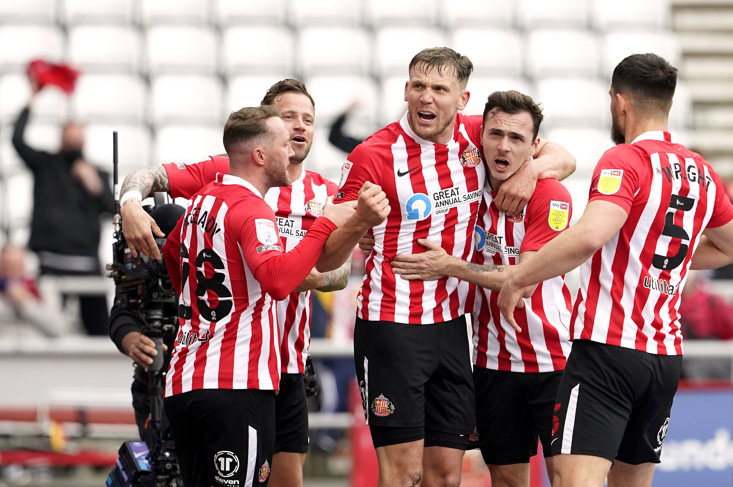 Lincoln could have put the tie beyond doubt when Josh Scowen brought down Conor McGrandles, but Lee Burge’s subsequent penalty save from Jorge Grant gave Sunderland hope of still rescuing the tie. Yet the home side’s best opening was when McGeady hit the post and Wyke slid the rebound wide as Lincoln held on on the strength of their excellent first-leg performance.

A fourth season in League One marks a true nadir for Sunderland, who had experienced only a single campaign of third-tier football in the long history of the club until their back-to-back relegations in 2017 and 2018 resulted in their current spell outside the top two divisions.

With Lee Johnson having taken over as manager in December in place of Phil Parkinson, the expectation is that the former Bristol City boss will be given the opportunity to have a full season in the role in 2021-22. But the longer Sunderland stay in this division, the shorter patience will be among supporters who have now seen their club fall short at both stages of the play-offs as well as missing out on the end-of-season deciders on the strength of points per game in the curtailed 2019-20 campaign.

For Lincoln, meanwhile, it feels like the possibilities are endless following a run which has seen them rise out of the National League, then League Two and to the League One play-off final in a four-year spell. Not since 1960 have they played in the second tier, but now only Blackpool stand in the way of Michael Appleton’s bid to take the club back into the upper reaches of English football for the first time in 61 years.