Football
News
The European Championships have provided the Czech Republic with their greatest moments
Simon Lillicrap
11:23, 21 May 2021

Czech Republic have only qualified for one of the past six World Cups, yet when it comes to the European Championships, they’ve appeared at every one of the last six editions, with a better record than England in that time span. The Czech’s appear to have slightly fallen in love with this competition and this is a love affair they do not want to end this summer.

Since becoming an independent nation from Czechoslovakia in 1993, this has been an incredibly fruitful competition for the eastern European country. At Euro 96, when all eyes were on hosts England, they came incredibly close to winning the entire tournament, eventually losing in the final in extra time to Germany.

That side is still fondly remembered by all. Pavel Nedved, Patrik Berger and Karol Poborsky are all still household names worldwide and their second place achievement is still the closest the Czechs have come to winning a major tournament. However, eight years later, the continent fell in love with Nároďák all over again.

The 2004 Czech Republic side was one of the most entertaining we have seen at an international tournament this century. Poborsky and Nedved were still key while Petr Cech, Tomas Rosicky, Jan Koller and the great Milan Baros had emerged to take Europe by storm. That front two, with the creativity of Rosicky and Nedved behind them, caused all sorts of problems for some of the best defences on the planet.

They scored ten goals in four games as they won a group that included the Netherlands and Germany and then beat Denmark in the last eight to reach the semi-finals. Ultimately the eventual champions Greece (still unbelievable to write that) stopped them in the last four and it felt like an opportunity missed, but this side still wrote their name in history.

Check out our other Group D previews here: England, Scotland and Croatia. 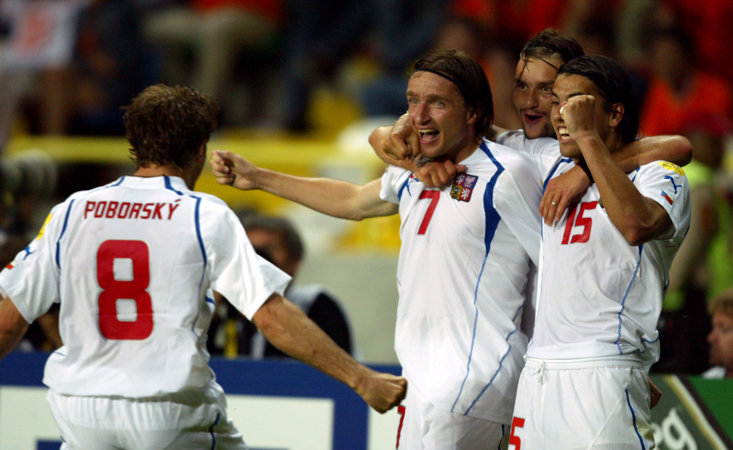 And so we turn our attention to the current generation, hoping to emulate those heroes of the past. Current Slavia Prague players or Slavia Prague alumni make up the majority of the squad, with West Ham’s dastardly duo perhaps the most recognisable from a Premier League perspective. Little was known about Thomas Soucek and Vladimir Coufal when the Hammers spent a combined £20m on them last summer, but they have emerged into two of the signings of the season as David Moyes’ side look to finish in the European places.

Coufal’s workrate and crossing ability are exceptional, while Soucek’s aerial presence is so difficult to deal with, as his 10 goals this term prove. For context, that is the same number as Raheem Sterling, Pierre-Emerick Aubameyang and Michail Antonio. Remarkable. Burnley’s Matej Vydra has not quite hit those heights but will be included in the squad.

The highly rated Patrik Schik, currently at Bayer Leverkusen has 10 goals in 24 for his country while Vladimir Darida of Hertha will captain the side, with 70 caps to his name. But what of this next generation of talent coming out of Prague?

David Zima is a promising 20-year-old defender and Slavia Prague teammate Lukas Provod should be included as an attacking winger but across the city, for Sparta, the latest gem could have been produced. 18-year-old forward Adam Hlozek is yet to be capped by his country but has a late shout of making it into the squad after a stunning season. Despite missing a large chunk of the season through injury, he has scored 11 goals in 18 league games, including six in his last five which has put him on West Ham’s radar, and now surely put him into the thoughts of manager Jaroslav Silhavy.

This side faces an incredibly tough test to get out of a group that includes England, Croatia and Scotland, but they are used to being the underdogs. With their West Ham duo driving them forward, and the possibility of one of Europe’s most in-form teenagers emerging up front, they will have to channel the legends of 1996 and 2004, if they are to do the unexpected this summer.