South Korea’s World Cup dream will continue after they sensationally came from a goal behind to beat a lacklustre Portugal 2-1 at the Education City Stadium on Friday afternoon.

The last time these nations met was two decades ago at the 2002 World Cup in South Korea/Japan. The Taegeuk Warriors came out on top on home soil that time, condemning Portugal to a group stage exit with a 1-0 win while they would eventually go on to reach the semi finals.

The drama certainly wasn’t lacking this time around either, even though both of the countries now find themselves in the knockout stages next week. The win means that South Korea have now avoided being eliminated from the group stage for the third World Cup tournament in a row and it condemns both Uruguay and Ghana to an early exit.

Portugal, who made six changes to the team that beat Uruguay on Monday night, started brightly and it didn’t take them long to leave South Korea with a huge mountain to climb - especially considering Seleção das Quinas have never lost a match at the World Cup when they’ve scored the first goal!

It was one of the six changes, Ricardo Horta, who broke the deadlock after just five minutes. A fine long ball from Portuguese stalwart Pepe found Diogo Dalot whose neat cutback was latched onto by the Braga forward for an easy finish.

South Korea thought they might have found a route back into the tie ten minutes later when the ball found the back of the net after a short corner, but Jin-Su Kim was ruled offside.

A period of heavy South Korean dominance finally bore fruit in the 27th minute. From the corner, Son Heung-Min's cross took a slight glance before bouncing off the back of Cristiano Ronaldo and into the path of Young Gwon-Kim for his seventh international goal.

OptaJoe
@OptaJoe
4/7 - Four of South Korea's last seven goals at the World Cup have been scored in the 90th minute or later of the second half. Drama. 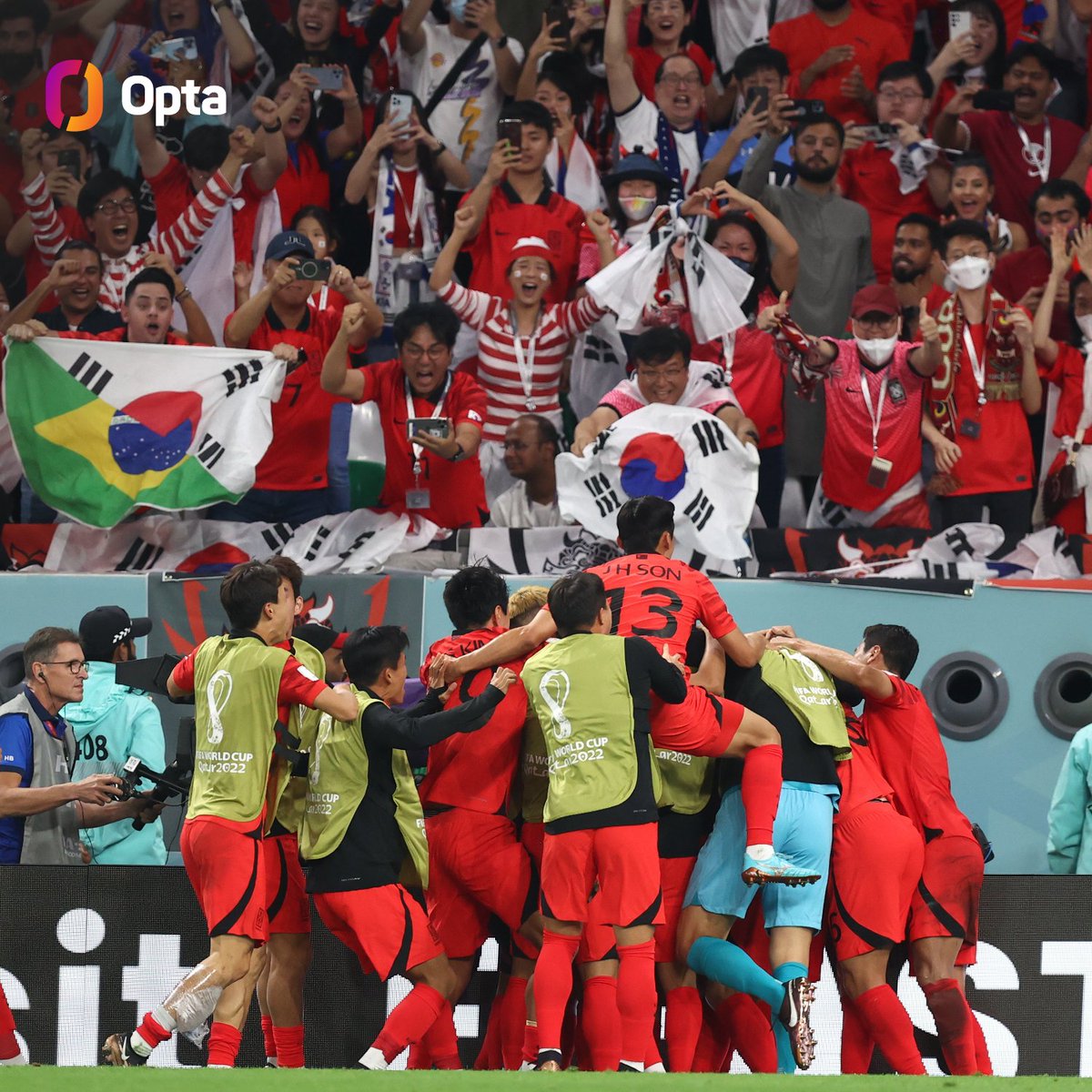 After a week where Ronaldo’s “involvement” in Bruno Fernandes’ opener against Uruguay stole headlines across the world, the superstar’s undeniable involvement this time around smacks of a cruel irony.

Ronaldo almost put his side back in front soon after when Vitinha had Seung-Gyu Kim at full-stretch to palm away, but the former Manchester United star had little time to react and his header on the rebound was put well wide.

Ronaldo’s bad luck continued after the break when Cancelo’s lifted ball into the box fell to him, but the forward’s follow-up shot was straight at the goalkeeper and the linesman’s flag was up. Ronaldo, who passed a late fitness test to be involved in the starting line-up, was brought off on the 65th minute and his hunt to tie Eusebio’s World Cup goal record (9) will continue in the last-16.

As the second half wore on, Portugal began to put the pressure on but after some excellent build-up play and a smattering of half chances, they couldn’t find their reward. Cue a South Korean upset…

From a Portugal corner, South Korea broke on the counter and Son got on the ball with time to run at the defence. The Tottenham Hotspur man then slipped it through for fellow Premier League star Hee-Chan Hwang to sweep into the far corner. Four of South Korea's last seven goals at the World Cup have been scored in the 90th minute or later.

South Korea and Portugal will now have their eyes on tonight's Group G matches between Serbia and Switzerland and Cameroon and Brazil to see who they'll take on in the next round.