It turns out the answer wasn’t Lampard and Gerrard. It wasn’t a diamond midfield, or Heskey and Owen. It wasn’t Sven Goran Eriksson or Sam Allardyce. It wasn’t sticking with a winning team come what may, nor was it squeezing all the best players into the starting XI no matter what. The answer to the age-old question of how to get England back to a major final was Gareth Southgate, Atomic Kitten and Neil Diamond.

The scenes at Wembley on Wednesday after the Euro 2020 semi-final win over Denmark were 55 years in the making. All the ups and downs which have followed led to this moment. Sure, there’s a final still to play, and on Sunday night there will be nervous anticipation on a whole new scale, but the enormity of such a constant psychological barrier being shattered must not be taken for granted. This was a special moment whatever happens against Italy.

And at the heart of it was Southgate. Once upon a time he was the guy who had failed on the big stage, the one from the Pizza Hut advert. He was then a respectable if unspectacular Premier League stalwart, the man who took Middlesbrough down in his first managerial role and later the overseer of a miserable England showing at the Euro Under-21 Championship.

But when he stepped into the role of England manager at short notice after Allardyce’s brush with infamy in a Manchester restaurant with a pint of wine, he seemed to fit the role immediately. And at every turn he appears to find new ways to prove he has exactly the right temperament, the right ideas and the perfect balance for the so-called ‘impossible job’. 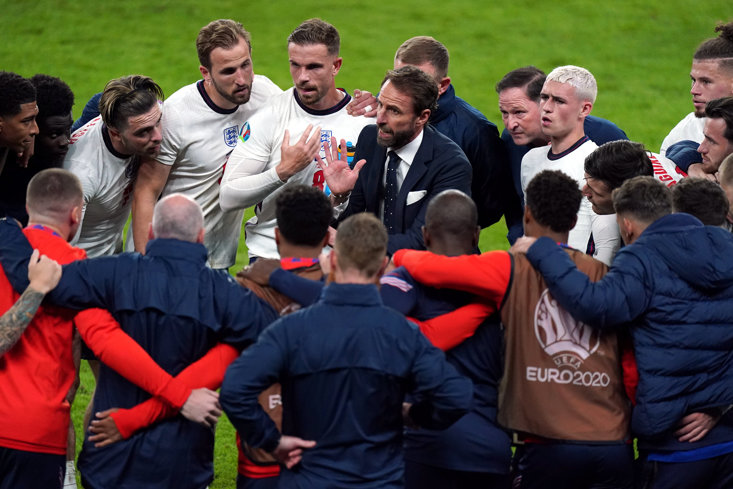 SOUTHGATE'S LEADERSHIP UNDER PRESSURE HAS BEEN KEY TO ENGLAND'S SUCCESS

England achieved continuity by coincidence when Southgate stepped up. They had gone for the best club manager in the land before when selecting the likes of Sir Bobby Robson and Graham Taylor, they had swashbucklers like Terry Venables and Kevin Keegan, then the foreign choices of Eriksson and Fabio Capello. The steady hand of Roy Hodgson had turned out not to be so steady, and when Allardyce’s indiscretion became public the FA had to hastily turn to Southgate.

What has followed is historic in the prism of the England men’s football team. The run to the 2018 World Cup turned out only to be an appetiser. In 2021, Southgate has delivered us a national team to be proud of on and off the pitch. The players fight for what they believe in away from the action and battle for the collective cause once the whistle blows.

He’s no crowd pleaser in the typically English sense, and it has paid massive dividends. England managers past would have played Jack Grealish from the start of almost every game this year due to the weight of public pressure. Some would have banged on about “playing your best players” the way former national team players still do to this day. But Southgate has made a hundred key decisions which could have backfired and made him look an ass.

When he changed the shape to good effect against Germany in the round of 16, he admitted afterwards: “You know that if you change the shape, and you pick certain players ahead of others, if it goes wrong you’re dead.”

On Wednesday he did it all over again, substituting substitute Grealish – a no-can-do in the eyes of died-in-the-wool English football fans – with the side leading 2-1 in extra-time. On came Kieran Trippier as Southgate changed the formation again and placed an emphasis on ball retention. What followed was one of the more comfortable periods closing out a game that any semi-finalist has ever had.

Difficult decisions are nothing new to Southgate though. He was the man who ended Wayne Rooney’s international career, handed a goalkeeper with just three caps to his name, Jordan Pickford, the gloves at a World Cup, and even in the last 12 months has dealt with delicate situations involving Phil Foden, Mason Greenwood and Harry Maguire admirably and with minimal fuss.

His ability to lead the group whatever the background noise has rightly gained praise, with Gary Neville on ITV talking of the hole Southgate has filled in a divided nation. “The standard of leaders in this country over the past couple of years has been poor, looking at that man, he’s everything a leader should be, respectful, humble, he tells the truth.”

There will be a part of the England fan base that will never be happy. They will always want their favourites to be in the line-up and will forever blame something or someone else when things don’t go to plan. But in Southgate this team has exactly the manager it needs. He’ll make the tough calls nobody quite expects, he’ll stand up for his players, and he’ll do it all with the calm persona of a true leader.

He’s one win away from becoming a legend, but he’s already a history-maker whatever happens next.

x
Suggested Searches:
The Sportsman
Manchester United
Liverpool
Manchester City
Premier League
More
football
Carson Pickett Becomes First Player With Limb Difference To...
Carson Pickett has made history, becoming the first limb difference player to play for the United States [ ... ]
football
Happy Birthday Troy Deeney: Here Are The Most Memorable Championship...
Iconic EFL Championship striker Troy Deeney turns 34 today and everyone remembers his dramatic goal [ ... ]
football
Style And Substance: The Lowdown On Manchester United New Boy...
While Manchester United fans were busy scouring the internet for crumbs of information on Frenkie de [ ... ]
football
Online Hate Crimes Will Now Result In Football Banning Orders...
People who are convicted of football-related online hate crime can now receive banning orders that prevent [ ... ]
football
LIVE Transfer News: De Jong, Raphinha & More
Good morning and welcome to The Sportsman's LIVE transfer blog, where we will have you covered for [ ... ]
football
Football Docs To Binge On Amazon Prime Before All Or Nothing:...
The much-anticipated All or Nothing: Arsenal documentary finally has a release date! The story of the [ ... ]
football
From Stadium MK To Wembley: Our Women's Euro 2022 Stadium Guide
Euro 2022 is edging closer and England is all set to welcome fans from across the continent to witness [ ... ]
football
Newcastle United Finally Get Their Man As Sven Botman Signs
Newcastle United have confirmed the signing of Dutch centre-back Sven Botman from Lille for an undisclosed [ ... ]
football
Chelsea Close To £55M Deal For Leeds United's Raphinha
It’s the transfer window that just keeps giving!  Chelsea are now reportedly close to agreeing [ ... ]
football
Happy Birthday Kevin De Bruyne: The City Man Could Be In For...
Kevin De Bruyne turns 31 today and while he can expect no shortage of presents, he is a man with more [ ... ]
football
Forget Transfers, Here Are The Players That Could Improve Their...
The transfer window offers a twice-a-year opportunity for clubs to re-jig their squads, shift the deadwood [ ... ]
football
Success Or Failure? Every EPL Club's Most Expensive 2021-22...
The summer transfer window is well underway and fans across the Premier League are demanding that their [ ... ]
football
Netherlands Striker Miedema Feels Euro 2022 Can ''Put Women's...
Netherlands international Vivianne Miedema believes that this summer’s Euro 2022 in England is [ ... ]
football
LIVE Transfer News: Raphinha, Sven Botman & More
Good morning and welcome to The Sportsman's LIVE transfer blog, where we will have you covered for [ ... ]
football
Richarlison Over Antony: The Transfers Man United Need To Do...
With Manchester United’s summer business continuing to revolve around Frenkie de Jong, discussion [ ... ]
football
How Arsenal Can Get The Best Out Of Gabriel Jesus As £45m Deal...
Arsenal are closing in on the signing striker Gabriel Jesus from Manchester City in a deal [ ... ]
football
Four Number 17s Sadio Mane Will Look To Live Up To At Bayern...
Sadio Mane is embarking on a new adventure with Bayern Munich, having ended his six-year love affair [ ... ]
football
Arsenal Keeper Matt Turner's Journey To The Prem Has Had Many...
It’s all systems go at the Emirates Stadium with Arsenal acting swiftly to bolster their squad [ ... ]
football
£170M! The Long-Term Cost Of Chelsea's Horror Romelu Lukaku...
Romelu Lukaku’s loan return to Inter Milan is imminent and just one year after Chelsea paid £97.5m [ ... ]
football
The Third Best Stadium In Glasgow, Hampden Park Desperately...
From the 10-goal thriller between Real Madrid and Eintracht Frankfurt in the 1960 European cup final [ ... ]
football
Premier League Meets Primeira Liga: Why English Clubs Are Raiding...
As Premier League clubs frantically try to assemble squads that will improve their lot this season, [ ... ]
football
Transfer News: Gabriel Jesus To Complete Arsenal Switch
The latest news from the football world sees Manchester City and Arsenal linking up once again, this [ ... ]
football
Burnley Manager Vincent Kompany Talks Transition, Transfers...
Vincent Kompany was a fine footballer – but can he cut the mustard as a manager? The former [ ... ]
football
Clowes’ Bid Accepted For Derby County As Rosenior Is Named Interim...
It’s been a torrid season for Derby County fans, ending in relegation to League One, but [ ... ]
football
Man United, Chelsea And Newcastle Linked With Neymar Ahead Of...
Following reports that Neymar is considering leaving PSG this summer, it is now being claimed that only [ ... ]
football
LIVE Transfer News: Chelsea Chasing Sterling & De Ligt
The final day before the Premier League clubs begin their pre-season training and there's [ ... ]
football
European Champions On 10 Days Notice: 30 Years On From Denmark’s...
“Our sponsors were not prepared for us to go, so what we had was the Under-21s kit. When you look [ ... ]
football
QPR Boss Michael Beale On Carlo Ancelotti, Steven Gerrard And...
Michael Beale began his coaching career at Bromley Church Hall. With coats and bags pushed to the side [ ... ]
football
Andy Carroll To Club Brugge And Football's Weirdest Transfers
Andy Carroll is reportedly in talks with Club Brugge over a move that would see him potentially play [ ... ]
football
Cristiano Ronaldo Next Club Odds If He Leaves Manchester United...
Even at the age of 37, Cristiano Ronaldo remains one of the most dangerous footballers on the planet. [ ... ]