Football
News
The midfielder was again at the heart of his side's best play as they beat Croatia on Monday
Simon Lillicrap
19:34, 28 Jun 2021

We’ve just witnessed perhaps the greatest match at a European Championships in the 51-year history of the competition.

After a jam-packed domestic schedule due to Covid-19, players forced to play in front of empty stadiums and fans deprived of watching their heroes, this was an utterly joyous celebration of football. Croatia 3-5 Spain had absolutely everything. A horror own-goal, a last-minute equaliser to cap off an unlikely comeback and a brilliant half-volley from Alvaro Morata, who has suffered horrendous abuse in the opening weeks of this tournament.

What these two nations served up was 120 minutes of enthralling action, in front of a packed stadium in Copenhagen. Anybody lucky enough to have a ticket inside the Parken Stadion, even the Croatians on the losing side, will know that they have witnessed something spectacular tonight.

When Unai Simon conceded a horror own-goal early on, Luis Enrique’s side kept their composure. 18-year-old Pedri fired the ball back towards the Athletic Bilbao keeper, who failed to control with his feet as the ball rolled past him into the net. That was the ninth own goal scored this tournament, remarkably as many as every other European Championships combined. A comforting word for both the goalkeeper and the teenager from their manager, a man who has seen it all, was all it took to get Spain back on track.

Their dominance was frightening for 85 minutes of this tie. Sergio Busquets kept them ticking and a goal that could have destroyed their confidence instead motivated them. Back on the front foot, Luis Enrique’s relentless pressure finally paid off as the ball fell to Pablo Sarabia after a series of blocked shots, and he slammed the ball in via a deflection to level the scores. Spain were utterly dominant in the first half, but Croatia attempted to settle into their defensive style that has given them huge tournament success in recent years. It didn’t work. 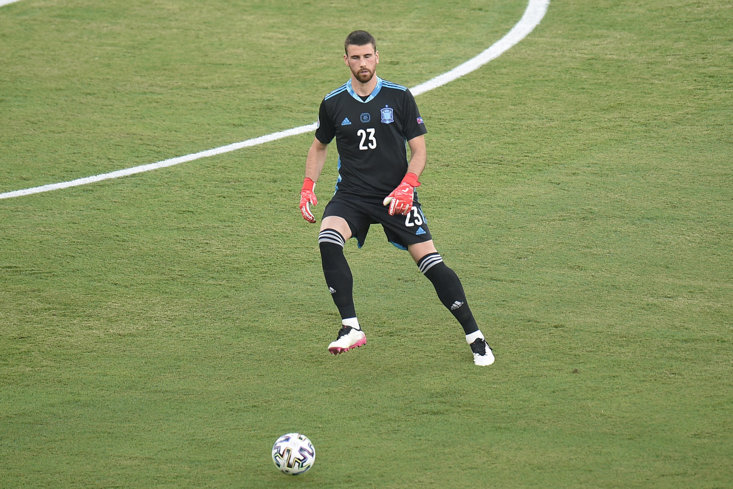 SIMON SOMEHOW ALLOWED PEDRI'S BACKPASS THROUGH FOR A HORRIBLE OWN GOAL

Spain overwhelmed the 2018 World Cup finalists after the break. Perhaps the most unlikely goalscorer on the pitch, Cesar Azpilicueta, got on the scoresheet for the first time in a Spain shirt with a bullet header from close range. Ferran Torres gave Luis Enrique’s side what looked like an unassailable lead as the 21-year-old shrugged off his marker and cooly finished past the goalkeeper. Spain had thoroughly deserved the 3-1 scoreline, but this Croatia side, as we have seen so many times in recent years, refused to read the script.

In front of a noisy following in Copenhagen they pulled a goal back and sent their fans wild with five minutes to go. Mislav Orsic bundled the ball over the line after a goalmouth scramble and all of a sudden Spain, who had looked so composed, crumbled.  In the 93rd minute, Mario Pašalić headed home the equaliser from six yards out to force extra-time and send the Croatians absolutely nuts.

Only Spain’s 4-3 win over Yugoslavia at Euro 2000 comes close to providing the same drama that this match did.

Extra-time was as end-to-end as the 90 minutes, before Morata, after a torrid few weeks, fired home Spain’s remarkable fourth goal. The Juventus striker brought the ball down on his chest before unleashing a fierce half-volley into the roof of the net. The venom in that strike was justifiable given his wife and children have been abused on the streets of Seville in recent weeks. That should shut the doubters up.

Four became five minutes later as Dani Olmo crossed to Mikel Oyarzabal, who squeezed the ball past the goalkeeper in what was to be the final decisive blow. An utterly exhausting 120 minutes of football ends with Spain in the last eight, having scored 10 in their last two games, and Croatia sent packing after a herculean effort.

What a game. What a sport.