Ten years ago Spain were the superior force in global football. World and European champions, they were a side who would go on to defend their title at Euro 2012 as their international dominance reflected, and was built upon, one of the greatest club sides we have ever seen.

But a decade is a long time in football. Those stars of the past are long since retired, and now the Spanish national team is at a crossroads ahead of their final Euro 2020 group game against Slovakia on Wednesday. Two draws against Sweden and Poland have hardly got the pulses racing, and defeat in Seville will see Luis Enrique’s side crash out of the competition in an era during which it is almost impossible for the big teams not to qualify for the knockout stage.

They should still progress and, unless Poland beat Sweden, results elsewhere mean that a draw will be enough for them to secure a place in the last 16. Disciples of Luis Enrique will point to the fact that Portugal won the last edition of this competition having achieved three draws in the group stage, but make no mistake, it would be a huge surprise if Spain went deep into the competition this time around.

La Roja simply do not boast the quality they did 10 years ago and their young players are not of the same ability as those names from the past. Eric Garcia, Ferran Torres, Dani Olmo and Barcelona’s Pedri all have shown promise for their clubs, but how many of those would have been competing for a place, or had the hopes of a nation pinned on their shoulders, in the era of Xavi, Andres Iniesta and David Villa?

Sergio Busquets and Jordi Alba aside, the international experience this squad has is also questionable. Only Koke and Alba of the current group started their World Cup last-16 match against Russia in 2018, representing a serious turnover of players for a side still struggling to come to terms with the fact they are no longer contenders for the major international trophies.

Spain’s two major clubs are failing. Their frantic power grab as part of the European Super League was a sign of desperation, and one they will not give up without a fight. You can see why. Barcelona are on the brink of financial ruin and Real Madrid are not faring much better. With big-money signings now not viable, the duo are clearly falling behind not only major European clubs but also domestic sides. 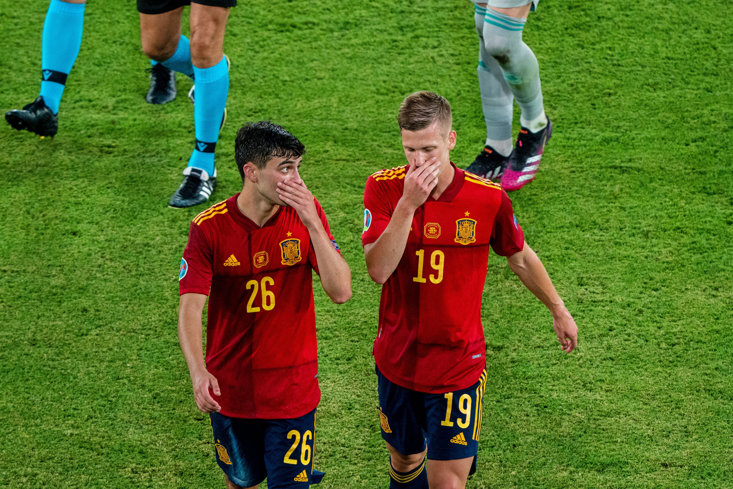 Pedri and Dani Olmo Have Failed to Shine this summer

When Atletico Madrid won La Liga in 2014 it was because they had overhauled and outbattled two of Europe’s greatest sides over the 38-game league season. Between 2009 and 2019 Barca and Madrid won seven out of 10 Champions League titles and Diego Simeone’s Atletico had beaten both of them to the title in what went down as one of the finest La Liga title wins. His side won the league this year largely because the two big guns are in utter turmoil.

When Luis Enrique didn’t select a single Real Madrid player for his squad this summer, eyebrows were raised. But his options were limited, and picking an injury-riddled 35-year-old Sergio Ramos wouldn’t have solved Spain’s problems. Of the 11 who started the 2010 World Cup final, only Joan Capdevilla and David Villa were not Madrid or Barca players, and the latter would join the Blaugrana that summer. The change is drastic. Los Blancos are no longer a hotbed of Spanish talent, while Barcelona's Spanish conveyor belt has dried up - of their three players selected, two are over 30 and one is a teenager relatively untested at this level.

The era of dominance that began in 2008 coincided with two successful club sides, but as a result Spain’s expectations have completely skyrocketed. Before 2008, they had just one European Championship to their name, won back in 1964, and during the 80s, 90s and the majority of the noughties, they were known as international football’s greatest underachievers. Just like England, you would always hear talk about how ‘this could be the year’ but, like their English counterparts, a Round-of-16 or quarter-final exit was the norm. 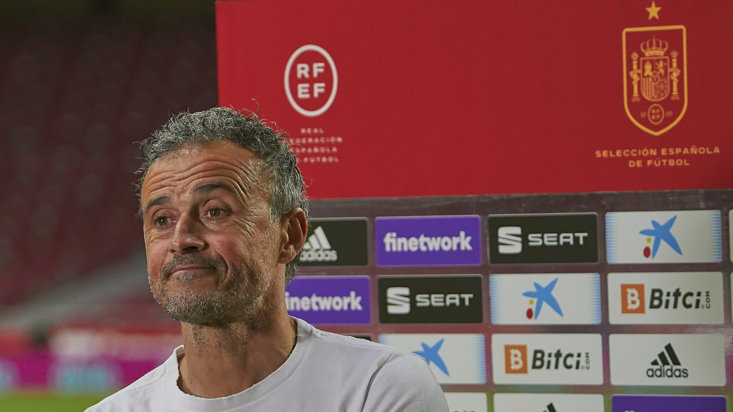 Luis Enrique is overseeing a difficult period for Spanish football

It’s perhaps time to revert back to the way we thought about Spain 20 years ago. All top nations experience generations of brilliant players who come through, and then retire, at the same time. Spain’s talented group achieved more than anybody could have believed possible, but they left behind a void that was impossible to fill.

No side since Brazil in 1962 has won back-to-back World Cups, the last five winners have all been different, and Spain themselves are the only team to have ever successfully defended the European Championship. Generations of players come and go, and in Spain’s case they are currently in a footballing recession.

This time around, the first objective will be to get out of their group, which looked like a relatively simple task on paper. Spanish football’s current lull is now reflected in the national team, so a quarter-final appearance must be seen as a success given the current predicament they find themselves in. The glory days are over, and it could be a while until Spain can compete with the world’s elite once more.

x
Suggested Searches:
Manchester United
Liverpool
Manchester City
Marcus Rashford
Premier League
More
football
Messi, Lewandowski Or Salah: Who Should Win The 2021 Ballon...
This year, seemingly more than ever before the interest in the annual Ballon D’or has reached [ ... ]
football
Patson Daka Nets Four To Lift Leicester City Off The Floor In...
After scoring his first Premier League goal against Manchester United at the weekend, Patson Daka just [ ... ]
football
Henrik Larsson, Jimmy McGrory And Celtic's Greatest Goalscorers...
At just 5’6”, Jimmy McGrory didn’t look like your archetypal centre-forward, but the [ ... ]
football
The Best British Player Ever? It's Time To Put Some Respect...
Tottenham Hotspur lost the game, but Gareth Bale had made them a real force to be reckoned with. He [ ... ]
football
After Bruce's Inevitable Sacking, The Possibilities Are Endless...
His departure was an inevitability in so many ways. And, frankly, this is probably a case of perfect [ ... ]
football
How Do Chelsea Solve ''Tired'' Romelu Lukaku’s Goalscoring Conundrum?
When Chelsea announced the return of striker Romelu Lukaku in the summer in a whopping club-record deal [ ... ]
football
LIVE Football News: Follow Wednesday's Champions League Action...
What a sensational night of Champions League football we had on Tuesday. Ready for more of the same [ ... ]
football
Amad Diallo: The Former Atalanta Starlet Still Has A Big Future...
When Manchester United travel to the Gewiss Stadium in Bergamo, Italy tonight to face Atalanta, there [ ... ]
football
Record-Breaking Salah Mirrors Messi As Liverpool Secure Crucial...
As Liverpool made it three wins from three in the UEFA Champions League with a 3-2 victory over Atletico [ ... ]
football
Joao Cancelo Proves To Be Guardiola's Irreplaceable Cog As Man...
Joao Cancelo has such a presence in the Manchester City side and with a goal to his name in their 5-1 [ ... ]
football
Phil 2.0? Golden Cole Can Reach Foden Goal
Just when it feels like Phil Foden has finally transitioned from future superstar to automatic pick [ ... ]
football
Rooney? Howe? Conte? Who Could Replace Bruce At Newcastle?
As things stand, Steve Bruce is the manager of Newcastle United. However, his side’s 3-2 loss [ ... ]
football
LIVE Football News: Man City, Liverpool and Celtic In European...
Happy Tuesday, everyone! Arsenal 2-2 Crystal Palace closed out the eighth Premier League gameweek, with [ ... ]
football
Everything You Need To Know About This Week's Europa League...
The Europa League is back with Rangers, Celtic, West Ham and Leicester City all in action across the [ ... ]
football
Late Lacazette Strike Spoils Vieira's Return To Arsenal
Arsenal substitute Alexandre Lacazette was the party pooper on Patrick Vieira’s return to [ ... ]
football
Everything You Need To Know About This Week's Champions League...
The UEFA Champions League is back this week with Chelsea, Manchester City, Manchester United and Liverpool [ ... ]
football
Gerrard Or Lampard Should Be Given Newcastle Job - Former England...
Paul Robinson believes his former England team-mates Steven Gerrard and Frank Lampard ought to be high [ ... ]
football
John McGinn Has Evolved As A Player And Villa & Scotland Are...
It may have been a disappointing afternoon on Saturday for John McGinn and Aston Villa after they threw [ ... ]
football
Manuel Lanzini, Crystanbul And The Greatest-Ever Premier League...
Twelve months ago today, West Ham United looked dead and buried. Trailing 3-0 with eight minutes remaining [ ... ]
football
European Football Round-Up: Napoli Win Again, Bayern Back Top...
Napoli are still 100 per cent, Real Sociedad are top of La Liga, Paris Saint-Germain are back to winning [ ... ]
football
LIVE Football News: Arsenal-Crystal Palace Plus Champions League...
Happy Monday, everyone! It was a fascinating Premier League weekend, and it's not over yet. Arsenal [ ... ]
football
The King Returns To His Castle: Vieira Takes Improving Palace...
It has taken only seven games for much of the Selhurst Park faithful to be won over by Patrick Vieira, [ ... ]
football
Spurs Beat Newcastle On A Day Where Football Is Secondary
Football is not a matter of life and death. And despite the well-worn cliche, it is not actually more [ ... ]
football
Benitez’s Everton Suffer Hammer Blow At Home To West Ham
Sometimes two teams can be so perfectly-matched that they cancel each other out. That was almost the [ ... ]
football
The FA Cup First Round Draw Round-Up
The FA Cup first round draw took place today, with some big names going into the hat. Sunderland will [ ... ]
football
More Than The Sum Of Their Parts: Benitez And Moyes Share Managerial...
As David Moyes returns to Goodison Park this weekend with his West Ham United side, he will be warmly [ ... ]
football
Steve Bruce: An Unwanted Guest At Someone Else’s Party
1000 games as a manager is cause for immense celebration. In an industry as trigger-happy as football, [ ... ]
football
Ben Chilwell And Edouard Mendy Shine As Chelsea Edge Battling...
Ben Chilwell’s first-half strike was the difference in a tight west London derby as Chelsea defeated [ ... ]
football
Leicester City End Man United's 29-Match Unbeaten Away Run With...
Leicester City earned a late victory over Manchester United to ease the pressure on Brendan Rodgers [ ... ]
football
Roberto Firmino Hat-Trick Helps Fire Liverpool To Another Record
A Roberto Firmino hat-trick and Sadio Mane’s 100th Premier League goal inspired Liverpool to another [ ... ]