The greatest thing about Liverpool Football Club at the moment is the excitement they offer. They have a magnificent front three, a vibrant full-back pairing, a centre-back duo that are wonderful to watch in action, a maverick in goal and Jurgen Klopp – one of the most appealing figures in football – as their manager.

So maybe the grumbles this week about their midfield stocks, which have led to japes about calling up academy coach and former first-teamer Jay Spearing, are more a reflection on the quality elsewhere in their squad than an actual gripe about what they offer in the middle of the park.

The sight of Thiago Alcantara limping off against Fulham last Saturday made plenty of Liverpool fans wince, as their most technically gifted midfielder left the field with a nasty-looking hamstring injury. But the knee-jerk response online has been for fans to belittle what they have in the likes of Jordan Henderson, Fabinho, Curtis Jones, Naby Keita, Alex Oxlade-Chamberlain and Harvey Elliott.

Sure, they don’t boast Kevin De Bruyne, Bruno Fernandes, Ruben Neves, Bernardo Silva or N’Golo Kante, but what they do have is a selection of players who complement the energy and dynamism across the rest of the park. Klopp and the Anfield recruitment team know that they do not need to fill their midfield with big-ticket, world-class players when what they really need from that department is the desire and application to harness what their more creative team-mates can offer.

With the nature of their forward line, Liverpool’s attackers often drop deep and run at defences, rendering pointless the addition of a ‘number 10’ type advanced midfielder, while the quality on the ball offered by Trent Alexander-Arnold and Andy Robertson means they also have plenty of width without spending more than they need on further speed in the middle. 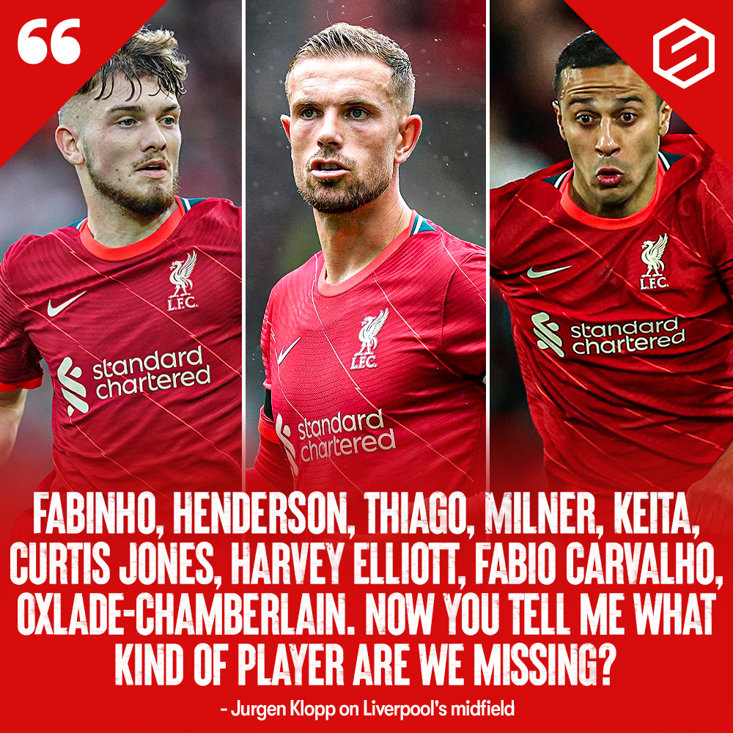 What they do need is intelligent footballers, ones who can fill gaps when they appear, whether that be in front of the back four, behind the buccaneering full-backs, or further up the field if all three forwards are attempting to finish off a sweeping move. So when the likes of Fabinho and particularly Henderson are questioned by people among their own club’s fan base it does smack of a misunderstanding of the roles that Liverpool need to see performed in midfield.

Many supporters seem to want their football club to be filled with flair in every position, but that will never win anybody any trophies. And Liverpool have already proved over the past four seasons that they have hit upon the right formula under Jurgen Klopp. These same players that are being belittled right now were leading the Reds to the Champions League title in 2019, the Premier League in ’20 and a cup double last season which was a couple of results away from becoming an unprecedented quadruple.

So while the talks of bringing Spearing back into the fold are clearly tongue-in-cheek, any panic over Liverpool’s current midfield needs to be tempered with a reminder that what they have to offer elsewhere is damned near unparalleled. Klopp knows what he needs, and while it isn’t Jay Spearing, neither is it some £100m superstar that doesn’t fit the well-established mould.

LIVERPOOL 4/5 TO WIN WITHOUT CONCEDING - BETFRED*