Football
News
There is a distinct lack of edge in the relationship between Europe's two greatest teams
Andrew Dillon
13:29, 15 Apr 2022

Tennis is where intense rivalry is played out in velvet-lined surroundings and competing athletes scrap it out amid mutual appreciation and applause.

Centre Court is where everybody claps everybody and it’s precisely why tennis remains a summer pastime rather than a year-long national obsession. And thank goodness for that.

Manchester City and Liverpool’s domination of English football is being drummed up as a duel with a difference. There is mutual respect, bilateral warmth and well-wishing before and after the thrilling encounters between two exciting teams on the pitch.

Most recent was the breathless meeting in the Premier League last Sunday which ended in an honourable draw. The game provided captivating moments, magical individuals and sublime skills. And it decided nothing. Just as it was last October with a similar 2-2 draw at Anfield.

At Wembley on Saturday respective managers Guardiola and Klopp will no doubt greet each other with gentlemanly handshakes and polite chit-chat before the FA Cup semi-final.

There is also a growing chance Liverpool and Man City could meet in an all-English Champions League final this season in what would be the fourth meeting of 2021-22. The advancement of these two clubs in recent years means they are now regarded jointly as the commanding force in European football. 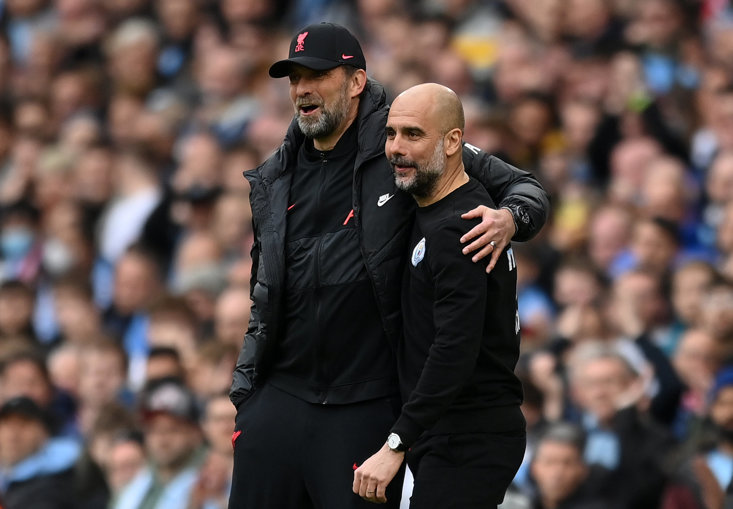 KLOPP AND GUARDIOLA ARE FAR TOO FRIENDLY FOR A 'RIVALRY'

It’s reasonable to suggest that Liverpool versus Manchester City is the new El Clasico, replacing the biannual culture clash between Real Madrid and Barcelona.

The match that grips Spanish football, and for years the world, is more than about football. Politics, cultural differences and ferocious one-upmanship come into play, more so than the game itself on occasion. Play for one and you’re taking a big risk playing for the other.

Current Madrid manager Carlo Ancelotti was lucky to keep his job after the visiting Catalans smashed four past his team in the most recent episode of what is a rivalry in every sense.

But can obvious competition and desire to win be classified as a rivalry if there is no animosity?

Managerial titans Alex Ferguson and Arsene Wenger despised each other and could not hide it. Eventually they gave up trying. Manchester United’s bloodthirsty battles with Arsenal in the early 2000s needed an 18 certification and the goading, tunnel bust-ups and verbal baiting split the nation.

People up north who didn’t support Manchester United plumped for Arsenal and vice versa. Nobody was indifferent.

Patrick Vieira versus Roy Keane, Martin Keown in the face of Ruud van Nistelrooy. Pizza thrown around in the tunnel at Old Trafford - such pantomime.

The trouble with Manchester City in particular is that they are difficult to dislike.

The only emotion stirred when they are playing is checking if your teenage son has left FIFA playing on his Xbox, such is the often faultless quality and clean cut lines in their tactics.

It was actually refreshing to see them getting involved in a bit of bother at spiky Atletico Madrid on Wednesday. There was finally a glimpse of a pulse, of aggression and human feeling.

Rivalry is the bedrock of sport at every level - often more important than the physical exertion itself.

Not many people outside the world of golf can remember who sunk the winning putt in last year’s Ryder Cup.

What was far more enthralling was the civil war in the American team: the bitter feud between team-mates Brooks Koepka and Bryson DeChambeau and whether two golfers on the same side would actually fight? And moreover, who would win?

Boxing press conferences are renowned for face-offs. Steaming heavyweights squaring up. A crazed Mike Tyson and Lennox Lewis starting work early with a punch-up ahead of their fight in the US in 2002.

Football is rare in that the action itself can at times carry the product with its energy and simplicity. But it is still bound by many of the same rules that govern other sports, in that nothing sells like bitterness and mutual dislike. It’s the playground element in all of us when a fight broke out and everyone gathered around to watch.

In Scotland, Rangers play Celtic four times a year - as many meetings as we could see between Liverpool and Manchester City this season.

Religion has driven a huge wedge between the two clubs for generations and it will never be healed. As a result, it is the most watched game north of the border and the only time Scottish football gets on the international map.

It is a sad fact that Liverpool and Man City need to find something to dislike about each other before they can claim to have a rivalry.