Cycling
News
The record-breaking swimmer-turned-cyclist would be a worthy winner of this year's award
Joey Mills
07:55, 17 Dec 2021

Britain’s greatest Paralympian, Dame Sarah Storey, will have the chance to add Sports Personality Of The Year to her incredible list of accomplishments this Sunday. Whether she takes the iconic silver camera trophy home or not, her achievements and influence are an indelible part of British sporting culture.

Storey has won an incredible 28 Paralympic medals including 17 golds, both of which are British record totals. The fact that these medals are spread across two very different sports, swimming and cycling, is a testament to both the determination and the innate ability of the 44-year-old.

The Eccles-born athlete had seen her swimming career cut short after the most promising of starts. Storey was just 14 years of age when she scooped two golds, three silvers and a bronze at the 1992 Barcelona games. Despite this staggering arrival on the scene, few could have predicted she would still be adding to her medal tally almost 30 years later.

More success followed, with the swimmer winning three golds, five silvers and two bronzes over the course of the next three games. Then Sarah’s world was turned upside down. She was forced to retire from the pool after the Athens Paralympics in 2004, after a long-term ear infection took its toll. Many athletes would have given up, content with a glittering medal haul. Instead, Storey swapped the pool for the pedals and began a cycling career that would prove historic.

Since switching to the velodrome, Storey has never looked back. If she was to take a backwards glance, it would usually be to look at her nearest challenger in a distant second. Dame Sarah has competed against both able-bodied as well as disabled athletes, including an appearance at the 2010 Commonwealth Games in Delhi. At the 2008 Paralympics, her maiden games as a cyclist, she set an individual pursuit time that would have put her in the top 8 at the Olympics. The Beijing games saw her clinch her first two cycling golds, a total she was still adding to this year in Tokyo. 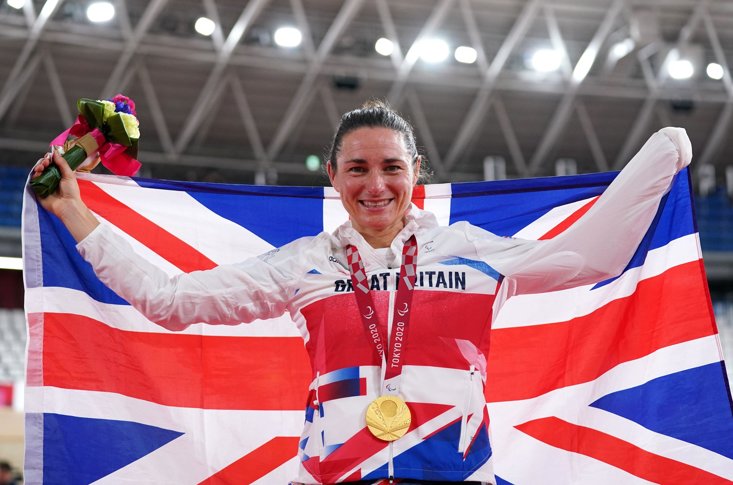 The delayed 2020 games that played out this summer saw Storey clinch three more golds. Not only did Sarah win the individual pursuit, road race and time trial, but she moved ahead of swimmer Mike Kenny to become Britain’s most decorated Paralympian ever. Coupled with the absolutely staggering 76 world records she has broken, Storey has one of the greatest legacies in sport.

Dame Sarah Storey’s career has been one of perseverance. By nature, a Paralympic athlete has already overcome so much to get where they are. In Storey’s case, she was born without a left hand after her umbilical cord wrapped around it in the womb. She also battled an eating disorder and childhood bullying to reach the very top of two sports. She has been undaunted by the prospect of testing her skills whenever and against whomever. Velodrome, road or pool. Paralympics or Commonwealth Games.

Her career is one of immense achievement that does not just battle adversity, but defeats it. In a strong Sports Personality Of The Year field, a win on Saturday for this mighty athlete would be another thoroughly-deserved and hard-fought victory.