Olympic diving champion Tom Daley has grown up in front of our very eyes. Since coming into the national consciousness as a 14-year-old at the Beijing 2008 games, the Plymouth-born athlete has been a household name. The tragedies and triumphs, the anguish and catharsis, Daley’s life has played out almost entirely in the public eye. The fact that the diver has emerged from the goldfish bowl as a well-adjusted, likeable character is impressive. The fact he has emerged as a champion is utterly remarkable. This Saturday, he could yet emerge as BBC Sports Personality Of The Year.

Daley is no stranger to the BBC’s sporting gala. He is a three-time winner of Young Sports Personality Of The Year, the only nominee to win the award more than once. Daley has also been nominated for the main award on two occasions. The prodigy goes into this year’s ceremony with something he has never had before, however. This time, Tom Daley enters Sports Personality Of The Year as an Olympic gold medalist.

The belated Tokyo 2020 games that took place this summer saw Daley finally get the monkey off his back by reigning as an Olympic champion. The diver and his partner, I’m A Celebrity star Matty Lee, won the Men’s synchronised 10m platform diving event. Finally, Daley’s magnificent decade and a half in the sport had its crowning achievement.

Of course, Daley’s career had not been short of gold in the run-up to Tokyo. The 27-year-old had three World Championship golds and two Commonwealth golds amongst countless British and European titles. But the Olympics is rightfully considered the peak of sporting achievement, and at this event Daley had always come close but without claiming the top prize. The diving star claimed an individual bronze at London 2012, and a synchronised bronce four years later. But the gold had eluded him until now. Another individual bronze to go with his synchronised gold in Tokyo has made 2021 a banner year for Daley. 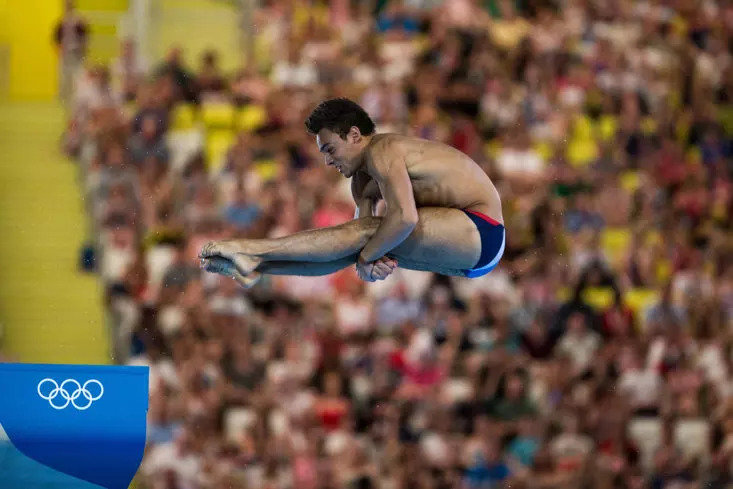 Away from the pool, Daley has been an ambassador and inspiration for the LGBT community. Tom is a tireless campaigner against the homophobic treatment that is commonplace in some countries, and has forged links with several charities to try and engineer real change for LGBT people who live in fear. Using his platform as a high-profile gay athlete to make a positive difference in the world is the epitome of what Sports Personality is all about.

As well as his status as a sporting icon and a social campaigner, Daley has also earned a cult following for his knitting. The diver can often be spotted poolside knitting or crocheting, a hobby he picked up during the COVID-19 lockdown. His creations have become so popular, he now has a separate Instagram account to display them.

Tom Daley goes beyond a mere athlete. He’s one of us. A son, a little brother, a nephew and a cousin to a country that has watched him grow from the little boy with the permanent smile in 2008 to the Olympic champion carrying the hopes of his nation and his community on his back today. Tom Daley is finally a gold medalist. Next stop: Sports Personality Of The Year?

x
Suggested Searches:
Manchester United
Liverpool
Manchester City
Marcus Rashford
Premier League
More
swimming
SPOTY 2021: Why Adam Peaty Should Take Home The Crown
Nobody dominates their particular sport quite like Great Britain’s Adam Peaty does. There is nobody [ ... ]
swimming
Adam Peaty On The Olympics, Depression, Being A Dad And Drake
Adam Peaty is arguably Britain’s finest modern Olympian. No other member of Team GB dominates [ ... ]
swimming
On This Day In 2001, 15-Year-Old Michael Phelps Announced Himself...
On this day 20 years ago, the greatest Olympian of all-time burst onto the world stage. Michael Phelps [ ... ]
swimming
Does Any Other Athlete Dominate His Sport Like The Untouchable...
Despite winning gold at the Rio 2016 Olympics and breaking his own world record in the process, Adam [ ... ]
swimming
Michael Phelps Has Made Some Interesting Comments
Michael Phelps, the man with a record breaking 23-gold medals, has claimed he never raced against a [ ... ]