As Tottenham Hotspur bade a tearful farewell to White Hart Lane in May 2017, it felt a lot like they were about to step confidently into a bright new future.

They had a glittering new stadium 12 months from completion, had just finished second in the top flight - a feat they hadn’t previously achieved in 56 years, boasted a manager in Mauricio Pochettino who was being spoken about as one of the great young minds in the world game, and had assembled a squad full of quality, verve and character.

Their playing staff, in particular, was the envy of most of the Premier League. Harry Kane was in the process of becoming the England captain following another fantastic season marked by 35 goals, Dele Alli was being heralded as ‘The New Gazza’, and the likes of Jan Vertonghen, Hugo Lloris and Toby Alderweireld were rightly being lauded for the parts they were playing in the division’s stingiest defence.

For many, White Hart Lane was the only snag when painting Spurs as a vision for others to follow. The beloved old place was becoming a relic from a bygone era populated by forward-thinkers with 21st century ideals.

But six months on from the long-delayed move to their state-of-the-art new stadium, the hopes that a 61,000-capacity showhome would be the final building block have been tempered by issues in the dressing room. Where once the playing side of the club was leading the way, it is now Pochettino and the team which needs to be brought into line with their surroundings if Tottenham are to kick on to the very top level.

Having been variously linked with jobs at Manchester United and Real Madrid in recent times, Pochettino is spending most of his days fighting fires right now. The Argentine spoke of “different agendas” in the dressing room following their Carabao Cup exit to Colchester United, sparking apparent dissent within the playing ranks as a result of the barb seemingly aimed at wantaway star Christian Eriksen.

Their 7-2 hiding at home to Bayern Munich in the Champions League this week only widened the rift developing between manager and players, with Moussa Sissoko undermining Pochettino’s tactical set-up after the match when claiming: “We get tired too quickly physically when we play with a diamond midfield.” 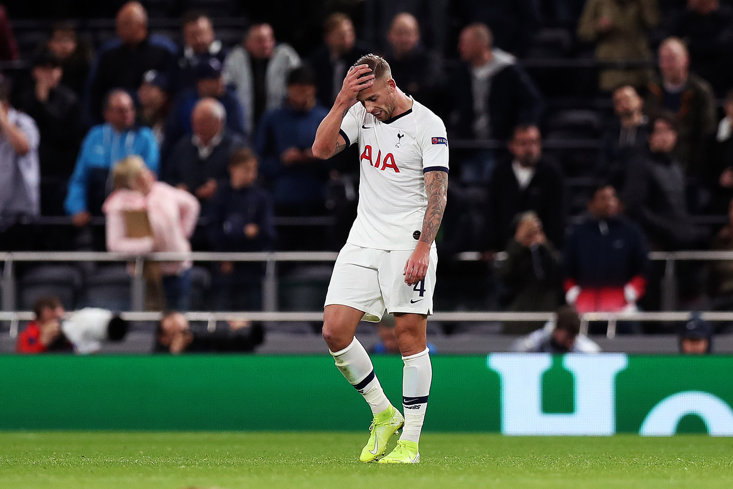 What Spurs need right now is a voice in the dressing room who is willing and able to unite the warring factions. They need a leader, a commander. But how many of them do they really have who can convince a group staring at its first significant roadblock to get the Spurs bandwagon back on track?

Hugo Lloris is the club captain but has always been one to lead with a quiet word in the ear rather than a rousing address to the masses. The former Nice manager Frederic Antonetti was quick to identify a young Lloris as captain material, claiming:

But it feels like Tottenham are in need of someone with different values to those right now, and there are few obvious contenders to step forward and really demand the attention of the group.

Kane is England captain but hardly gives the impression of being a motivational mouthpiece. Elsewhere, the likes of Vertonghen and Alderweireld would normally be candidates to step forward and rally the troops but both are currently unclear on what their future holds. Just like Pochettino, there are serious doubts regarding the possibility of them remaining in north London for 2020/21 and, as such, their voices may not carry nearly as far as they might previously have done.

If Pochettino’s message is no longer getting across, whose can?

Over the past couple of years Spurs had rallied against the concept of them being vagrants, wandering around aimlessly at Wembley while waiting for their sparkling new pad to be given its final lick of paint. They continued to get the job done under the cloud of that uncertainty, still beating traditionally bigger clubs to top-four spots and even making a Champions League final against all the odds.

But now that they are physically settled into their new space, mentally they appear not to be where they were in previous iterations. Their trip to Brighton on Saturday morning has suddenly become a real test of their character, and there will be many more ahead over the course of the season.

It will take a show of leadership and togetherness for Spurs to live up to the new level of expectation attached to their name, and we will learn over the coming weeks and months whether they still have enough of both to get to where they want to be without major changes.

Tottenham have moved with the times off the field. Now they need some leaders to emerge from the ranks to ensure that their football doesn’t get left behind.