What a year 2022 was for St Helens. They suffered more defeats in the Betfred Super League than in the previous three seasons and failed to defend their Challenge Cup crown, losing 20-18 to their arch-rivals, Wigan Warriors, in the Headingley semi-final. But despite all that, the champions improved on their amazing legacy.

In Kristian Woolf’s final campaign as head coach, Saints clinched a fourth successive Super League crown – the first time a quartet of titles has been achieved in the summer era – and marched to the League Leaders’ Shield crown in a season in which Wigan looked the real deal once more under new coach Matt Peet.

Not since Shaun Edwards, Martin Offiah, Denis Betts and Dean Bell were the biggest names in the sport has a team been so dominant as this current Saints outfit. And the Merseysiders are following a similar pattern to the seven-time back-to-back champions from Wigan back in the 1980s and 1990s even if there is a very different background to their achievements.

When Maurice Lindsay built Wigan for success back then, he did so by setting up a full-time, professional squad in a game played by part-timers. Wigan’s was the only squad filled with players focusing their efforts on their rugby league, and as a result the Cherry and Whites could cherry-pick absolutely any player thanks to the luxury Lindsay had afforded them.

Offiah came over to the 13-a-side game and scored 181 tries in 145 games for Widnes, so Wigan snapped him up for a world record £440,000 fee which wouldn’t be trumped for another 14 years. Gary Connolly started catching the eye as a youngster with St Helens so they bought him too. They brought in the best imports as well, from Frano Botica and Kevin Iro to Va’aiga Tuigamala and Henry Paul.

Their seven straight league titles between 1989-90 and 1995-96 were added to eight consecutive Challenge Cup wins from 1988 to 1995. But while nobody can expect to enjoy such domestic dominance across both league and cup ever again, Saints are now threatening a similar period of supremacy in the Super League standings. 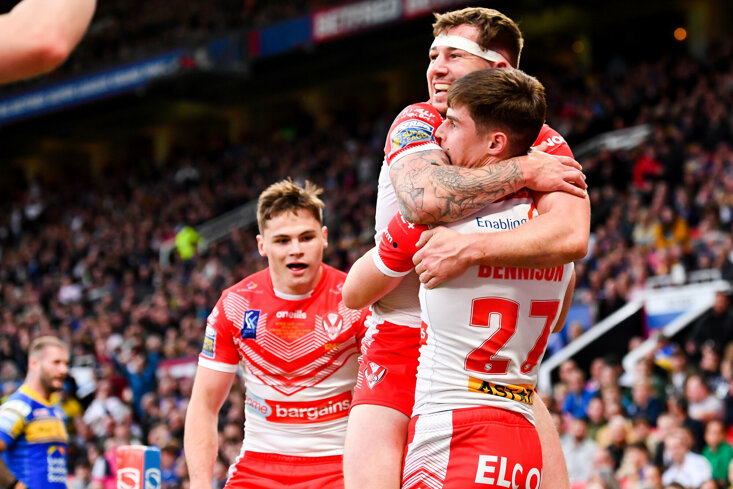 Having blitzed the 2019 title under Justin Holbrook, crowned with a near-perfect performance against Salford Red Devils, they overcame a poor start to 2020 to become a threat again following the five-month break caused by Covid-19 and overcame Wigan in an absolute epic of a Grand Final thanks to Jack Welsby’s now-infamous last-touch winner.

When crowds returned in 2021, Kevin Naiqama’s two-try performance at Old Trafford saw them edge out the table-topping Catalans Dragons, and 12 months on it was Leeds Rhinos who were put to the sword in another complete display on the biggest night of the year.

Saints have evolved very similarly to the Wigan side of old too. Just as the Warriors moved on from Bell to Barrie-Jon Mather, and Steve Hampson was replaced by a young Kris Radlinski, the Red Vee look rather different these days from the side which beat Salford back in 2019. The losses of the likes of Lachlan Coote, Luke Thompson, Zeb Taia and Naiqama have been offset by the emergence of Welsby, Joe Batchelor, Jon Bennison and Matty Lees.

Even in the coaching box, there are shades of the golden Wigan era. The seven titles at Central Park came under three different coaches, with John Monie’s four initial successes backed up by John Dorahy in 1993-94 and Graeme West over the following two seasons. At Langtree Park, the successes of Holbrook and Woolf have cleared the way for new boss Paul Wellens to come in and take on a squad which is both young and experienced, hungry and focused.

This Saints side isn’t the giant that that Wigan was. Yet. And that is very understandable. Wigan had everything laid on a plate for them to succeed, whereas teams today are working to the same salary-cap regulations and full-time opportunities as everyone else in the top flight. Wigan also had the oxygen of publicity at a time when the Challenge Cup would be shown on Grandstand and there was nowhere else to turn for sports fans to get their fix. Rugby league doesn’t get the same quality of airtime anymore, despite Sky Sports’ and Channel 4’s best efforts.

But if this team keeps on winning under Wellens then they will have to be taken seriously as potentially the greatest British side ever to play the game.