Following an early scare which saw a Kelsey Gentles try ruled out for a knock on, Saints turned in a convincing first-half display. Danielle Bush opened the scoring down the left before winger Rachael Woosey and England stars Emily Rudge and Amy Hardcastle crossed for further tries before the break.

Facing a 20-0 deficit, York came out of the blocks quickest in the second half and got back into the game when Sinead Peach touched down when Saints full-back Rebecca Rotherham couldn’t clean up at the back, and Rhiannon Marshall added the extra two.

Yet St Helens soon regained their stranglehold on the match despite the loss of key player Faye Gaskin as Woosey, Carrie Roberts and Paige Travis added further scores and Beth Stott kicked a third goal. 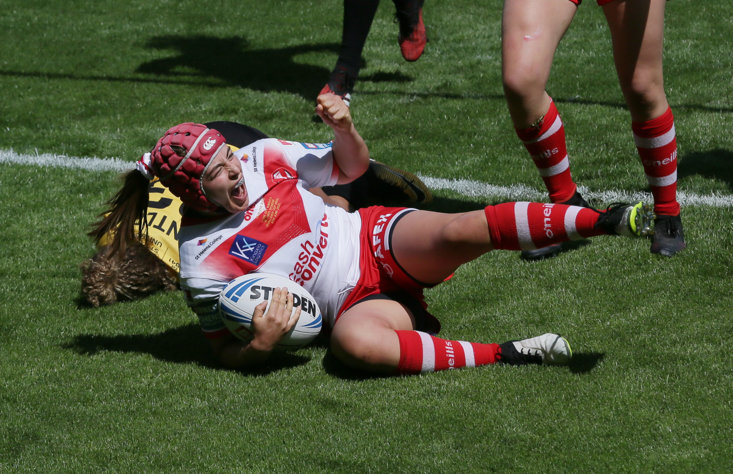 EMILY RUDGE GOES OVER FOR ONE OF SAINTS' SEVEN TRIES

“I’m absolutely made up for the girls, what a brilliant, brilliant game,” try scorer Rudge told the BBC after the match. “Everybody has really dug in there, I’m really, really proud of the girls, we worked really hard for the last couple of years to get to this point.

“Once we got settled I think we played some good rugby and I’m really pleased with the performance in the end.”

Saints’ first cup success comes as no great surprise given their blistering start to the Betfred Women’s Super League season. They opened the campaign with an 86-0 hammering of Bradford Bulls and followed that up with a 90-0 battering of Huddersfield Giants. Last time out they beat Warrington Wolves 54-6 to ensure they remain top of the embryonic table.

For York’s part, this will come as a learning experience for a side which has recently seen a huge influx of new players following the arrival of director of rugby Lindsay Anfield from Castleford Tigers.

They will look to bounce back with a Super League win next weekend when they take on Wakefield Trinity, while Saints have the small matter of a local derby against Wigan Warriors next up.