And the Rocket, bidding to extend his own record in the tournament by claiming an eighth success, opens up his campaign this year against the equally quickfire Jack Lisowski on Tuesday.

But this month marks the 25th anniversary of one of snooker’s great moments as a then 39-year-old Davis roared back from 8-4 down to beat emerging 21-year-old superstar O’Sullivan 10-8.

It was red-hot favourite O’Sullivan’s third Masters final in a row, having beaten John Higgins in 1995, and then lost to world No1 Stephen Hendry 12 months later. However, this was to be a glorious last hurrah for Davis, who had dominated the 1980s with six world title wins but not won a big tournament since the Welsh Open two years before.

O’Sullivan started the final in brilliant form with back-to-back centuries at the old Wembley Conference Centre to lead 2-0 and leave the Nugget fearing it could become a rout.

But then 22-year-old Lianne Crofts shed her clothes and leaped into the arena, appearing to shake O’Sullivan’s concentration and allowing Davis to claw his way back to 4-4 by the session’s end.

Recalling that famous third frame, Davis – now 64, and a popular BBC pundit – said: “I had messed up a few shots at the beginning of that frame. I’d just played a safety and as I was walking back to the chair I was annoyed at being in a bad situation early on in the match.

“All of a sudden I heard wolf whistles from the crowd and immediately realised what was happening. I was trying to keep myself together, so I didn’t even look up.

“My line later was that I didn’t even see her face, let alone anything else! They bustled her off and only then I looked up and saw the security staff put a coat around her.

“In the aftermath there was a wonderful moment when Ronnie mopped the brow of referee John Street. That was brilliant, and great Ronnie had the comedy in him to do that.

“But that moment seemed to break the spell of him playing brilliantly. Maybe it was just coincidence, maybe it wasn’t. But I could have ended those frames 7-1 behind.

“It was a bit of a sliding doors moment in terms of the context of what happened. It was a light moment in the room, I managed to win the frame and I got inspired again afterwards.”

Despite the off-putting interruption O’Sullivan rediscovered his composure in the evening, rattling off four frames in 49 minutes to lead 8-4. But Davis just found something as he had so often in the past, winning a third frame in a row with a magnificent break of 130 to close to 8-7 down – and then powering over the line.

Remembering his third Masters success, Davis said: “The juices were running and the person who comes from behind always has a little bit less pressure on them.

“In 1997, Ronnie was possibly not quite the player he became. I was able to play a little bit of an old school, tactical game to make it as hard for him to score as possible.

“It was an absolutely wonderful moment in my career having had a pretty rough 1990s, it felt like it was coming to an end. That was the last event I won, and it was a great way to put the icing on my career in terms of tournament wins.”

Davis continued playing until he finally hung up his cue at the 2016 World Championship 19 years later, though he was never in the winner’s circle for a major title after the age of 39. And he retains a huge respect for O’Sullivan, John Higgins and Mark Williams who have carried on winning into their 40s.

He said: “I think we were all aware of how talented Ronnie was, but the only part of the equation that people couldn’t have predicted was that he turned out to have a fantastic match temperament. We were all hoping and holding onto the idea he may be frail in that department, but he hardened up in the 2000s. 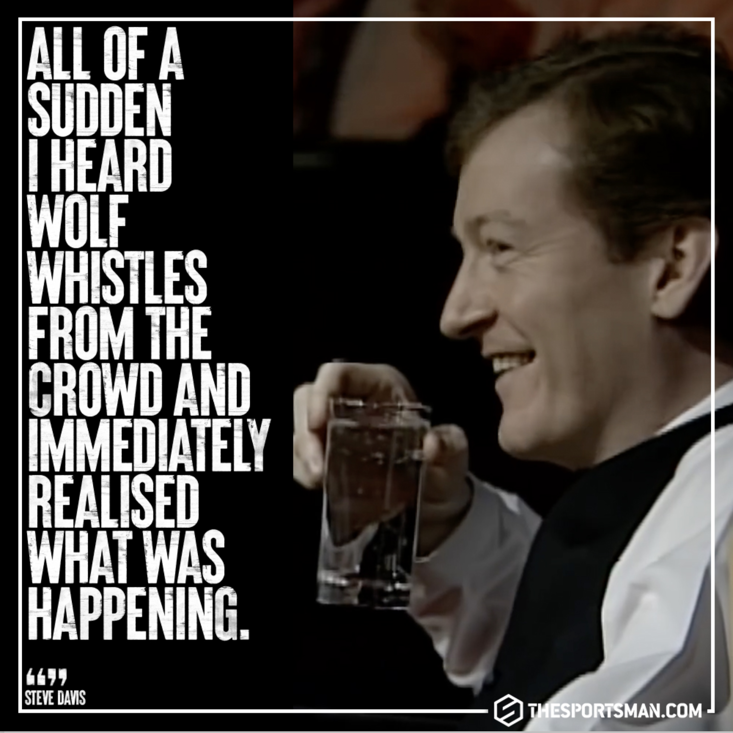 “All of a sudden it turned out that he was not just one the most jaw dropping snooker talents we’d ever seen, but that he was also rock solid in match play when needed.

“Ronnie O’Sullivan, John Higgins and Mark Williams have proven that age barrier to not be true. Perhaps it was just me and Stephen that struggled a bit after the age of 40. Now it is obvious, that as long as you are in mental and physical shape to withstand the pressures of the career you can go on.

“The interesting thing is how far can those three go on and push the barriers? I do think O’Sullivan is most likely, should he want, to win the World Championship in his 50s.”

Heading into the Masters O’Sullivan is in his 30th season as a professional, having won more majors (20), Masters (seven) and ranking titles (38) than anyone in history.

x
Suggested Searches:
Manchester United
Liverpool
Manchester City
Marcus Rashford
Premier League
More
snooker
15-Year-Old Schoolboy Wildcard Stan Moody Is A Shoot Out Sensation
Schoolboy Stan Moody claimed a sensational debut big-tournament victory at the quickfire Shoot Out on [ ... ]
snooker
Peter Devlin Raps On Stage Alongside Jessie J In Snooker Shoot...
Peter Devlin hopes he can perform on the Shootout stage as well as he did with singer Jessie J earlier [ ... ]
snooker
18.5m Viewers And Upside-Down Glasses: Dennis Taylor Ruled Snooker...
Snooker may never quite see another high-watermark like the 1985 World Championship final with its 18.5million [ ... ]
snooker
Neil Robertson: Other Tournaments Need To Match Incredible Ally...
Neil Robertson has urged the Crucible crowd to up their game as a spectacular Masters spectacle this [ ... ]
snooker
Neil Robertson Builds On Australian Ashes Success With Masters...
Neil Robertson piled Masters success on Ashes misery as the latest Australian to demolish England’s [ ... ]
snooker
Barry Hawkins Digs Deep To Book Masters Final Showdown With...
Barry Hawkins took his place in the Masters final after coming through yet another Alexandra Palace [ ... ]
snooker
Paul Hunter: The Great Man The Masters Trophy Is Appropriately...
Among many poignant moments at the 2022 Masters at Alexandra Palace, one perhaps stood out above all [ ... ]
snooker
Robertson Wins Masters Thriller To Reach Final But Celebration...
Neil Robertson produced an astonishing comeback to reach the Masters final by beating Mark Williams [ ... ]
snooker
World Number One Mark Selby To Seek Help Over Mental Health...
World No1 Mark Selby has revealed he will be seeking help over the current state of his mental health. [ ... ]
snooker
Neil Robertson Vows To Jump In Icy Alexandra Palace Lake If...
Neil Robertson has vowed to jump into the icy Alexandra Palace boating lake if he wins a second Masters [ ... ]
snooker
Judd Trump Insists Masters Atmosphere Is More Like Boxing Than...
Judd Trump laid out rival Kyren Wilson with a series of hammer blows on Friday – and then insisted [ ... ]
snooker
Masters 2022: Williams Edges Out Old Rival Higgins In An Alexandra...
Both Mark Williams and John Higgins testified to one of the most extraordinary atmospheres ever seen [ ... ]
snooker
Neil Robertson: Ashes and Michael Jordan Inspired Me Against...
Australia’s Neil Robertson took inspiration from both the Ashes and sporting legend Michael Jordan [ ... ]
snooker
Kyren Wilson Relishing Masters Clash With Rival Judd Trump
Kyren Wilson became the second man to scrape into the Masters quarter-finals on Wednesday – as [ ... ]
snooker
Judd Trump Edges Into Quarter-Finals But Mark Allen Still Smiling...
Mark Allen was still smiling on Wednesday night despite an agonising Masters final-frame defeat to Judd [ ... ]
snooker
Masters 2022: Snooker’s Class Of 1992 Still Thrilling Crowds...
All three of snooker’s famous Class of 1992 of Ronnie O’Sullivan, John Higgins and Mark [ ... ]
snooker
Ronnie O'Sullivan Wows Rolling Stones Pal Ronnie Wood With Masters...
Ronnie O’Sullivan wowed Rolling Stone Ronnie Wood as the Rocket got his bid for an eighth Masters [ ... ]
snooker
Shaun Murphy: Masters Defeat Is Just More Pain On Top Of Back...
It wasn’t just the pain of a disappointing Masters first-round defeat to Barry Hawkins that was [ ... ]
snooker
Ranking The Five Greatest Masters Finals - Featuring Williams,...
There were some near misses, and I have chosen to leave out the superb comeback victory for a 39-year-old [ ... ]
snooker
Masters 2022: History-Making Higgins Books His Place In The...
John Higgins made history when he walked out against reigning UK champion Zhao Xintong at the Masters [ ... ]
snooker
Fired-Up Mark Williams Defeats Wayward Defending Masters Champion...
Defending Masters champion Yan Bingtao had a bad start to his Sunday, getting lost while being [ ... ]
snooker
The Constant Uncertainty Surrounding Djokovic Could Impact His...
Detained and then isolated at Melbourne Airport on arrival from the Middle East, Novak Djokovic has [ ... ]
snooker
Changing Of The Guard: China’s Hopes For Snooker Domination
When Ding Junhui burst onto the snooker scene in spectacular fashion in 2005, many expected the Chinese [ ... ]
snooker
Masters Preview: Can Chinese Whizkid Yan Bingtao Defend His...
Snooker’s big guns will be out in force for this year’s Masters (9-16 January) and for defending [ ... ]
snooker
Ken Doherty - 25 years On From His Greatest Triumph At The Crucible
Ken Doherty will head back to the Crucible Theatre later this year to celebrate the 25th anniversary [ ... ]
snooker
Snooker’s Original ‘Grinder’ Cliff Thorburn Ready To Call It...
Snooker’s original ‘Grinder’ Cliff Thorburn admits he is finally ready to pack away [ ... ]
snooker
Graeme Dott Believes Stephen Hendry Will Be ''Much Better''...
Former world champion Graeme Dott has backed Scottish snooker legend Stephen Hendry to do some serious [ ... ]
snooker
World Number One Mark Selby Won’t Rest While There’s Still History...
Mark Selby insists there is no chance he will ever rest on his snooker laurels while there are titles [ ... ]
snooker
750-1 Upsets, Breakout Stars & World Class Wins: Snooker's Best...
Snooker like all sports to a greater or lesser degree was hit by the Covid pandemic in 2021 – [ ... ]
snooker
Ronnie O’Sullivan – What Changing Of The Guard?
If there is indeed a changing of the guard taking place in snooker, then someone clearly forgot to tell [ ... ]