When Hull FC lock horns with St Helens on Channel 4 this Saturday, rugby league will again shine a light on its original Man Of Steel.

The two sides compete each year in the Betfred Super League for the Steve Prescott Cup, in honour of a legendary full-back who performed with distinction for both clubs.

The sport’s prestigious player of the year award has since 2014 been known as the Steve Prescott Man of Steel. But his playing exploits form only part of an extraordinary story.

So who was Steve Prescott, and what is his lasting legacy to league and life?

As a player, relatively small in stature, Prescott wreaked havoc with his electrifying running and lung-busting support play. His positioning and tenacity brought a watertight defensive resolution that made him a nightmare to play against.

“First of all a great fella, a great human being,” says Paul Sculthorpe MBE, a league legend and one of Steve’s closest friends.

“But what a competitor, the ultimate competitor in everything he did and that showed in the career he had. He was never the biggest but Jesus, he put himself in some positions and what a talent,” Sculthorpe told The Sportsman.

“He was so good, so quick and it was such a momentous occasion to have the Man of Steel trophy named after him. An iconic award like Lance Todd and Harry Sunderland (the man of the match awards for the Betfred Challenge Cup and Grand Finals). Steve’s name is now synonymous with one of the highest awards in the game and that’s so deserving.” 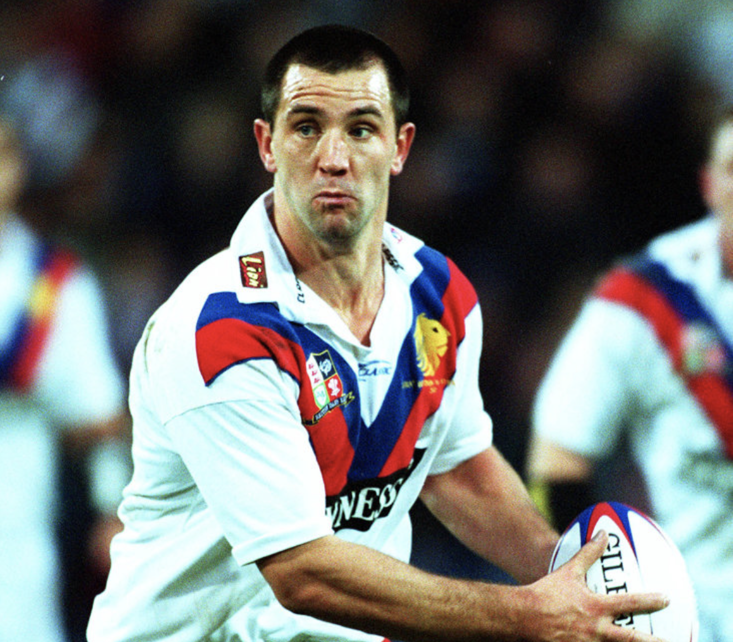 Following in the footsteps of dad Eric who also played for Saints, Prescott secured legend status at the club with league and Challenge Cup successes in 1996, dazzling in an iconic two-try Wembley performance, and winning the Cup again the next year.

His 249 career appearances for Saints, Hull FC and Wakefield were lit up by mesmerising running and a never-say-die attitude.

It was an attitude that would transcend rugby, and transcend sport when life dealt the cruellest of blows.

After a stellar career and, just as the next chapter of life was beginning, Prescott was diagnosed with a rare abdominal cancer - pseudomyxoma peritonei - and told he had months to live.

A conversation that would floor most of us. And one that was delivered in the same week in 2006 that wife Linzi gave birth to their second son Koby.

In 2007 he set up the Steve Prescott Foundation to raise funds for The Christie cancer hospital in Manchester where he was treated, and for the RFL Benevolent Fund to support other former players in need.

While terminally ill and undergoing gruelling treatment, he embarked on a series of extraordinary fundraising challenges supported by his team-mates and friends.

His efforts would raise over half a million pounds and were recognised with an MBE.

“For the stuff Steve went through with his diagnosis, treatments and then to run his marathons and challenges, trying to raise funds and awareness for other causes, it was unreal. “

Sculthorpe, himself a back-to-back Man of Steel, supported Prescott on many of the most gruelling endeavours. The pair ran back-to-back Paris and London marathons in 2012 that included cycling to the coast either side of the channel and then rowing the channel in a small rowing boat under a severe weather warning in between.

“On some of the challenges we did, I was struggling at peak fitness and was in as much pain as I’ve ever been in. And then you realise Steve is doing it with you, while on chemo and dying. For every mile he asked someone to swim, cycle or run, he was doing it himself with a terminal illness. In 2012 in France we shared a room so you see first hand the actual extent of his illness and it was awe-inspiring.”

Steve’s health deteriorated in 2013 and despite his extensive investigations, and relentless research into new treatment opportunities, there was just one option remaining that had never been done before.

Basically Steve, now ravaged with cancer, took the decision to have his insides taken out and be replaced by someone else’s, despite the match not being perfect.

He knew he may not survive, but knew if he went through with it then the science would enable others to survive in future.

“His legacy is more than the events, and awards,” says Sculthorpe.

“To find out, research and then get the opportunity to have a surgery that had never been done and then to have the balls as well to go through with it. And it worked. The complications took his life. But he beat the cancer. That has saved lives by allowing people to now have that operation. That is the ultimate legacy.”

Steve survived the operation and came round from it. He had no traces of cancer in his body. He died three weeks later in November 2013, after suffering complications from the surgery, seven weeks short of his 40th birthday.

Having been given months to live, Steve raised more than half a million pounds for the SPF over the next seven years, fuelled by his mantra ‘what the mind believes, the body achieves’.

His legacy lives on through wife Linzi, who alongside sons Koby and Taylor has helped the SPF to fundraising totalling £1.7million. Last summer, Taylor ran 100 miles in 48 hours, raising over £25,000. The year before he ran seven ultra marathons in seven days for the charity.

Koby, born in the week of his dad’s diagnosis, will later this year attempt to climb Everest for the Foundation.

Steve was one in a million, and to many of us a great friend.

Saturday’s Steve Prescott Cup will again underline what rugby league does as well as any sport.

It remembers, cherishes and honours those who have given it so much.