“While it is hurtful and raw now, the emotions, you'll find out that adversity will make you stronger in the long run. You've just got to understand that,” he tells The Sportsman.

“He will feel the pain of missing a penalty, the whole squad are feeling pain. The player I work with, Declan [Rice], I saw pictures of him walking around afterwards, bearing in mind he didn't take a penalty and was substituted, in tears. They've all felt the same hurt together and that hurt I think will stand them in good stead in the future.”

Manager Gareth Southgate, who took England further than they have been in a major tournament since 1966, came in for some criticism for subbing on Marcus Rashford and Jadon Sancho in the last minute to take a penalty and choosing Saka, still a teenager, to take the fifth kick. But Pearce doesn’t subscribe to the theory that more experienced players should have been put up for the penalties.

“The bottom line is we talk about young players - ‘if they are good enough, put them in’. Well part and parcel of football as well, is if you are good enough statistically to be one of the best five penalty takers, why should age be a barrier to you taking a penalty?

“Well done to Saka for standing up and taking a penalty and well done to Gareth for putting him up to take a penalty and he has only done that on the statistics that he has got over a long period of time. You've got to back the judgement of the coaches, management and player.” 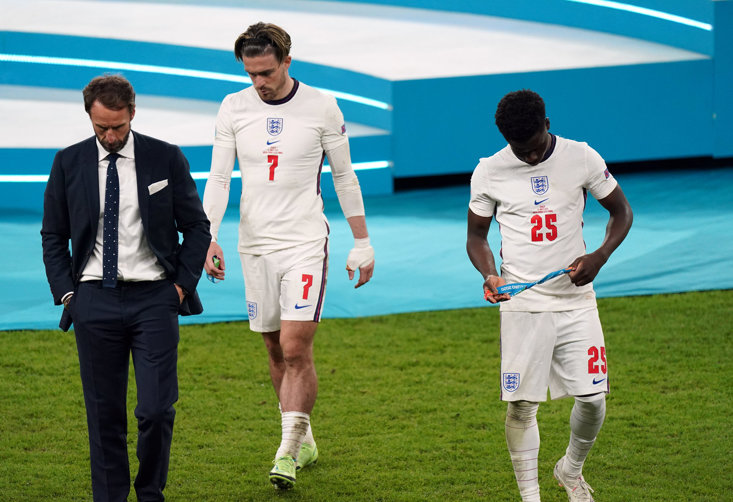 Pearce relied on his own mental resilience to bounce back from his miss in 1990, and responded on the pitch by producing his best ever goalscoring season, scoring 16 goals in all competitions from left-back for Nottingham Forest. He feels the Arsenal youngster can bounce back, just as he did from this disappointment.

“He [Saka] will be desperate to get back in at club level and have a point to prove form wise next year. His career is only going in one direction - upwards - and a penalty miss is not going to affect his career, I'm sure of that.”

Despite another penalty shootout defeat, Pearce is well aware the management team and players would have done everything possible to prepare for this shootout, something that wasn’t the case when he stepped up in the 1990s.

“The one good thing about this was you know Gareth and his analysis department would have done their homework on a penalty shootout,” he accepts.

“My frustration comes from when you bowl into a penalty shootout and you've not done your homework and you end up getting beaten then. People say it is a lottery. On this occasion I know full well, the England squad and the analysis department, they'd have practised penalties. If you don't end up winning a penalty shootout, I can live with that a little bit more as a footballing person because I know the homework has been done behind the scenes.”

England made it to the very last kick of the tournament. Jordan Pickford was heroic throughout and the only goals conceded in seven matches came from a brilliant free-kick and an unfortunate deflection in the final. Yet despite this near miss, some sceptics are still doubting Southgate, even though his tenure has seen the Three Lions make rapid progress. 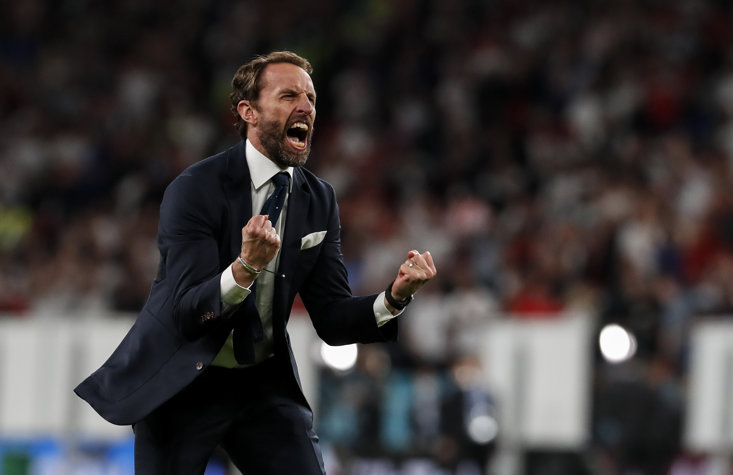 “Because I'm involved in the sharp end of football, sometimes you get a little bit frustrated with people who sometimes don't see a bigger picture,” Pearce says. “Everything is fantastically brilliant or it is doom and gloom and ‘get the manager out’ which is ridiculous really - you just can't build anything with that mentality.

“You've got to understand that there is not a member of the population that wouldn't have said at the end of it, we are going to go to two hours, extra time in the final and take our chance on penalties. Would you take that now at the start of the tournament? Everyone would have bitten your hands off and said brilliant, absolutely fantastic achievement.

“You've got to understand that. You can't just at the end of the tournament change your mentality and say 'oh no it wasn't good enough' - the whole building process is being put in place there, as I can see from the outside.”

Despite the final defeat, the England legend believes that this tournament will be remembered in the same way as Euro ‘96 was.

“I think this tournament will be looked at very, very fondly by the footballing public I really do. Sometimes when you are involved in it you don't realise how good it is. Things are raw and the England team have been beaten in the final, but when you look back in a year or three or five years time there are a lot of people, even if it is their first memory as a young child, they will look at this tournament in a special way I believe.”

x
Suggested Searches:
Manchester United
Liverpool
Manchester City
Marcus Rashford
Premier League
More
football
Brentford Are Way More Than Just Ivan Toney As They Approach...
Brentford will be the 50th side to have ever played in the Premier League when they begin their season [ ... ]
football
#HerGameToo Survey Reveals Shocking Scale Of Sexist Abuse Towards...
The social media movement #HerGameToo aimed at stamping out sexism in football has released the results [ ... ]
football
Future Chelsea Boss? John Terry's Aston Villa Apprenticeship...
Steven Gerrard is about to lead a title defence with Rangers, Wayne Rooney is fighting fires at Derby [ ... ]
football
Scottish Premiership Betting Preview: Rangers To Dominate Under...
The Scottish Premiership is back this weekend with a tasty opening round of fixtures kicking off the [ ... ]
football
Will Watford's Hire And Fire Policy Keep Them In The Premier...
In less than two years, Watford have had four permanent managers. Xisco is the man currently in the [ ... ]
football
Varane & Maguire Partnership Could Be Crucial to Man United's...
With the impending arrival of French centre-back Raphael Varane from Real Madrid, Manchester United [ ... ]
football
Everything You Need To Know About The Opening Weekend In The...
The 2021/22 Scottish Premiership campaign gets underway this weekend as Steven Gerrard’s Rangers [ ... ]
football
Norwich Should Be Praised For Trying To Do Things Differently...
Norwich City are always beaten with the same stick. Even when they were promoted in May, their social [ ... ]
football
On This Day In 1974: Bob Paisley Becomes Liverpool Manager As...
Much is made of Bill Shankly’s legendary impact in transforming Liverpool from a failing second [ ... ]
football
Welcome Home! The Footballers Who Returned To Their Boyhood...
Lukas Podolski has made a dream move to his boyhood club Gornik Zabrze at the age of 36, fulfilling [ ... ]
football
Former Team GB Manager Stuart Pearce Reflects On London 2012
Only one man in history has managed a men’s football team for Team GB at the Olympic Games. Back [ ... ]
football
Why Are David Beckham's Inter Miami Failing Under Phil Neville?
It wasn’t meant to work out like this. David Beckham, one of the most famous sportsmen on the [ ... ]
football
Lauren James' Chelsea Return Will Be Major Boost For The Blues...
Lauren James has returned to Chelsea and it is certainly a signing that will excite Blues fans. Having [ ... ]
football
Tokyo 2020: All The Results From The Opening Round Of Olympic...
The first round of football fixtures for the Tokyo Olympics have been completed, with an excellent result [ ... ]
football
Why Rafa Benitez's Everton Transfer Business Makes Sense This...
Rafa Benitez has got his Everton rebuild underway with the new additions of wide-men Andros Townsend [ ... ]
football
Ellen White Brace Sees Team GB To Comfortable Win In Olympic...
Team GB’s women’s football team got their Olympic campaign off to a flying start after they [ ... ]
football
Is Managing Team GB's Football Team At The Olympics An Impossible...
The Team GB women’s football team get their Olympic campaign underway on Wednesday morning against [ ... ]
football
Salford City or Bradford? Early Pre-Season Tips For The 2021/22...
The League Two season is now just over two weeks away and clubs will be desperate to welcome back fans [ ... ]
football
Postecoglou's Celtic Reign Begins In Champions League But He...
Celtic’s 2021/22 season gets underway under the new regime of Ange Postecoglou as they host FC [ ... ]
football
Sunderland? Wednesday? Ipswich? Pre-Season Tips For The 2021/22...
The new Football League season is now only a matter of weeks away and clubs up and down the country [ ... ]
football
A Look Into The Pre Season Of Every Premier League Club
With less than a month to go until the start of the new Premier League season, the 20 best sides in [ ... ]
football
Transfers Of Every Premier League Club So Far: Confirmed, Rumoured...
Euro 2020 is over, and unless you are passionate about Olympic football, all eyes are on the start of [ ... ]
football
Can Great Britain's Women's Football Team Win Gold At The Tokyo...
As the Tokyo Olympic games are just around the corner, all eyes will be on Team GB’s women’s [ ... ]
football
Fulham or Swansea? Early Pre-Season Tips For The 2021/22 Championship...
England’s run at Euro 2020 seems to have done the trick, and there are now less than three weeks [ ... ]
football
The Football Stars Expected To Shine In Pursuit Of Olympic Gold...
Euro 2020 may have concluded with a heart-breaking end to another gripping tale under Gareth Southgate, [ ... ]
football
Messi Is Bigger Than Barcelona And Keeping Him At All Costs...
Lionel Messi’s love affair with Barcelona will continue. Briefly, last summer, it looked as if [ ... ]
football
From Aguero To Alaba, The Biggest Confirmed Football Transfers...
With the European Championships done and dusted, this summer all attention turns back to club football [ ... ]
football
Will England Be Considered For 2030 World Cup After Wembley...
England’s bid to host the 2030 World Cup along with the rest of the United Kingdom and Ireland [ ... ]
football
1996 v 2021 - How Did England Respond To Their Last Penalty...
It might have been a final this time around, but England have had to overcome penalty heartache in a [ ... ]
football
Wembley's Twin Towers - Bonucci And Chiellini Are The Key Pillars...
The Twin Towers were back at Wembley on Sunday night. Not the concrete pillars which made the old stadium [ ... ]