Arsenal secured their most impressive win of the season as they took advantage of a defensive howler to beat Chelsea 1-0 at Stamford Bridge. That result not only means Arsenal have completed the double this season over their London rivals but it also leaves the door ajar for those clubs chasing the Champions League places, as West Ham and Liverpool boast games in hand on Thomas Tuchel’s side.

Tuchel’s Blues appeared to be suffering from an FA Cup final pre-hangover, if that is even a thing, as their players seemed all too well aware they would be fighting for football’s most historic trophy on Saturday afternoon. For a side that has been so vibrant and clinical since the turn of the year, a run that has led them to both the Champions League final and the FA Cup final, they looked devoid of ideas against a stubborn Arsenal backline.

Stubborn isn’t a word we have used to describe Mikel Arteta’s side this season but after Emile Smith Rowe fortunately gave them an early lead, they dug deep to shut out one of the division’s finest attacks. The English midfielder not only bagged the crucial goal but also tracked Reece James and was key in keeping the oncoming Chelsea onslaught at bay in the second half. It was a performance of great maturity from the 20-year-old, who looked full of confidence after he scored his first Premier League goal at the weekend.

The goal was incredibly fortunate, but Arteta’s side made the advantage count. Arsenal took the lead as Jorginho hit a back pass towards his own goal, unaware of the fact that Kepa Arrizabalaga was way out of his goal waiting to get involved in the play. The Italian had his head down and although Kepa recovered to get his hand to the ball, Pierre-Emerick Aubameyang was there to tee up Emile Smith Rowe for a simple finish and his second goal in as many games.

"That happens sometimes, I'm happy it went in but it was a slightly lucky finish," Smith Rowe said after the match. "It means so much to score for this fantastic club, I just want to keep pushing on. I'm so tired but I feel like we played well, we looked tired at times but we got the three points and showed our character, we defended really well in patches and after this tough season it was a good performance from us today." 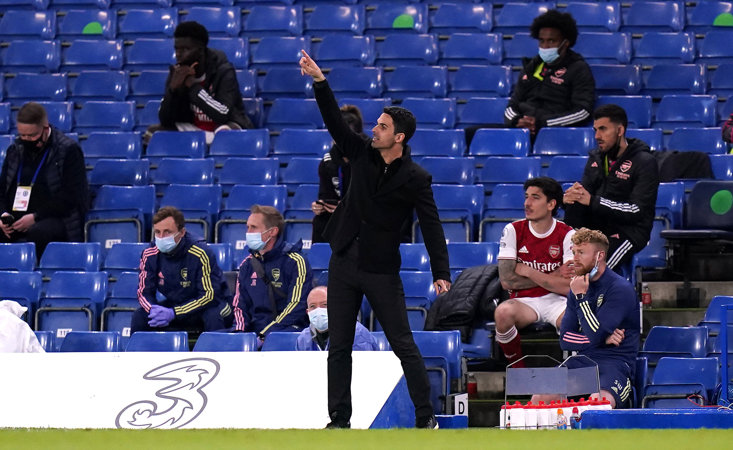 His runs on the ball caused Chelsea problems all evening but it was in the second half where he showed his value. With Arsenal under pressure, time and time again he brought the ball away from a defensive position and carried the Gunners up the pitch, relieving the pressure on a back line lacking in confidence.

Chelsea pressed on in the second half as Arsenal naturally dropped deep. The Blues thought they had got an equaliser when Christian Pulisic converted a Kai Havertz flick-on from a corner, but the American was clearly offside. Arsenal, through Smith Rowe, did come out and play a bit more at times in the second 45 but Arteta can take heart from their defensive resoluteness, as they shut out Chelsea to hand Tuchel only the third defeat of his Stamford Bridge reign.

Despite their defensive organisation, Arteta’s side still needed to rely on Berndt Leno in the final moments, as he tipped Kurt Zouma’s header onto the bar before substitute Oliver Giroud also crashed the ball against the woodwork from the rebound.

But Arsenal did hold on and their defence can be proud of this clean sheet, while their English starlet is just getting better and better every week.