Football
News
The Black Cats secured a 2-0 win over Wycombe to drag themselves back to the second tier
Simon Lillicrap
16:58, 21 May 2022

Sunderland finally ended their play-off curse and their four years of torment in League One with a 2-0 win over Wycombe Wanderers at Wembley. Elliot Embleton turned himself into a local goalscoring hero, as the season ticket holder from the age of nine scored the opener, before Ross Stewart added a game-winning second with ten minutes to go.

That crucial result means Alex Neil’s side return to the Championship, four years after they suffered a soul-crushing double relegation. Since his arrival in February, the club have embarked on a remarkable 16 match unbeaten run that has shot them into the top six, and now all the way into the Championship.

With 46,000+ Sunderland fans in attendance, Wembley became the party destination for those from the north-east this weekend. It was a red and white invasion and finally, after so many years of misery in the capital, Sunderland ended their play-off hoodoo.

Before today, each of their previous six play-off campaigns ended in brutal despair on the pitch. Two of those failures have come in the past three seasons in League One, but this time around, under Neil, they have rewritten history.

Jack Ross, Phil Parkinson and Lee Johnson have all tried and failed to get this great club out of the third tier, a division they have been desperate to get out of. They’ve been the giants in this division that just needed something to go their way and after two play-off final losses, finally it is their day in the sun.

From minute one, the Black Cats stamped their authority on this final. Just two minutes in Alex Pritchard whipped a free-kick that clipped the side-netting and the Sunderland fans at the other end of Wembley thought they had taken the lead.

Then minutes later, they were in front.

Embleton picked the ball up from inside his own half and ran unchallenged from the edge of the box before unleashing a vicious strike that beat David Stockdale for power. The goalkeeper should have stopped the effort, but the masses of Sunderland fans in attendance couldn't care less.

Last year, he helped Blackpool to promotion in this very match, as Sunderland were left to regret letting him go out on loan to their rivals - but now in the red and white stripes of his beloved hometown club, he produced an unforgettable moment.

Sunderland were well on top in the opening period, as their hoards of fans drank in the early glory, slightly wary of the fact that they took an early lead on this stage against Charlton in 2019, before losing in added time.

Still high off their party in Trafalgar Square, the fans roared their Black Cats on, and they delivered on the pitch early on, as Ross Stewart tested Stockdale. Sam Vokes, with 17 goals to his name, was a constant aerial threat, and headed over Wycombe’s best opportunity of the first half.

But Neil’s side led at the break and having gone unbeaten in their last 15, they were in pole position to seal that spot in the Championship. Wycombe started the second half well, but Sunderland should have doubled their lead as Pritchard whipped in a wonderful ball that Stewart headed just wide.

Whatever Gareth Ainsworth said at half-time clearly had some effect however, as his side were much more positive after the break. Vokes found himself with a chance inside the box after a defensive error but Anthony Patterson denied him in the Sunderland goal.

Embleton’s afternoon came to an end on the hour mark, but his job was done. Joe Jacobsen and Patrick Roberts’ battle down Sunderland’s right wing was a key feature of the final as Sunderland got themselves back up for the fight. 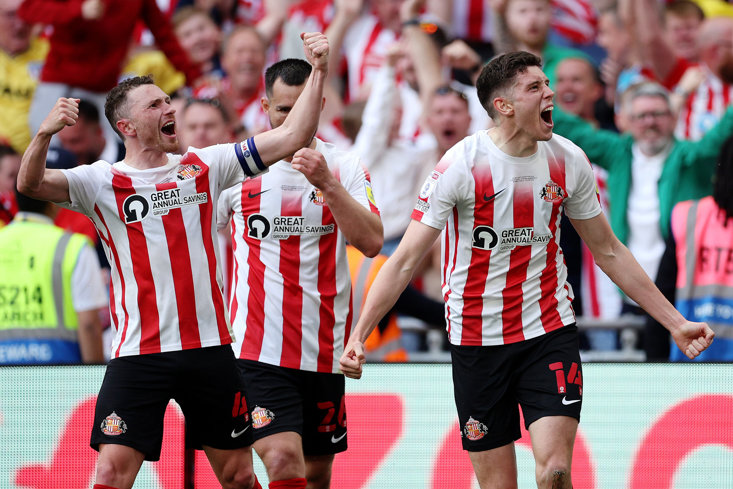 Adebayo Akinfenwa’s introduction, in his last ever game before retirement, lifted the Wycombe side, but their hope was extinguished as Stewart was set up by Pritchard on the edge of the box, and fired the ball into the bottom corner.

That was the moment Sunderland have been waiting almost half a decade for. 12 months ago they won the EFL Trophy in front of an empty stadium, but this time, they had an army of red and white followers with them to celebrate their finest moment in a decade. Some fans couldn't hind their emotions as tears were mopped up with red and white scarves, but this time at Wembley, they were tears of happiness.

So take it all in, Sunderland are finally back in the Championship.