Super Bowl LIII, the 53rd instalment of one of the world’s most highly anticipated and watched sporting events, takes centre stage in Atlanta on Sunday evening.

It will be the third time that the capital of Georgia will host the Super Bowl, but it will be the first time that it has been hosted in the Mercedes-Benz Stadium, the home of the Atlanta Falcons and the new MLS Cup winners Atlanta United.

AFC champions New England Patriots will take on the newly crowned champions of the NFC, the LA Rams, in a rematch of Super Bowl XXXVI where The Pats claimed their first of five Super Bowl titles.

This will be the Patriots eleventh Super Bowl appearance, three more than any other team in the NFL. The LA Rams, who were known as the St. Louis Rams between 1995 and 2015, will make their fourth Super Bowl appearance and hope to add a second title to their collection following their previous success in the 1999.

Despite not playing to their usual high standards this year, the Patriots remain the slight favourites for Sunday’s clash.

Both sides convincingly won their respective Division Titles, but both teams required overtime victories in their AFC and NFC championship ties.

The Patriots saw off Patrick Mahomes’ Kansas City Chiefs 37-31 in an incredible game on the road at the Arrowhead Stadium.

The Rams secured their Super Bowl place at the expense of the New Orleans Saints with Greg Zuerlein's field goal gifting them a 26-23 comeback victory.

The result was somewhat overshadowed by a controversial call in the fourth quarter when the Ram’s Nickell Robey-Coleman committed what looked like a pass interference, moments before they were able to go up the other end of the field and take the game to overtime.

With the stage now set, we have created a build-up guide to Sunday’s showdown, highlighting everything you need to know about both sides.

Two of the main storylines for Sunday’s game is the matchups between the Quarterbacks and the Head Coaches.

The Patriots have competed in four of the last seven Super Bowls, which is arguably the reason behind their favourites status and have an extraordinary level of experience on the biggest stage of them all.

The Ram’s on the other hand have a young roster, a young starting quarterback as well as the NFL’s youngest coach.

Will experience prevail over youth? 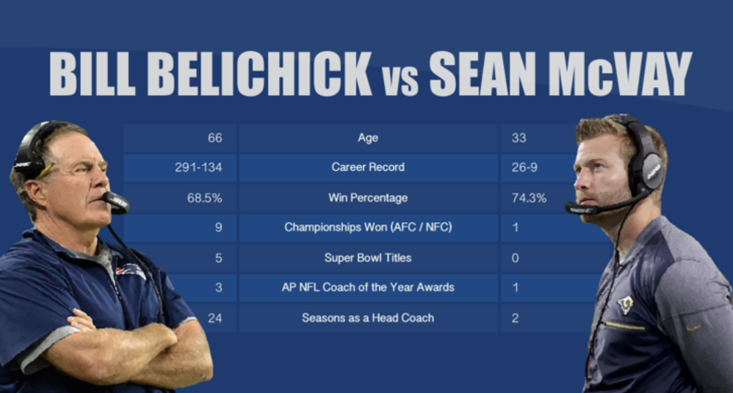 Renowned for his photographic memory and understanding of the game, he has the potential to be on of the most successful head coaches in NFL history.

McVay’s counterpart in the dugout, Patriots head coach Bill Belichick, will experience the Super Bowl for the 9th time as a head coach.

Winning on five of those occasions, Belichick holds the record for the most Super Bowl titles by a head coach as well most appearances.

The veteran coach also held the position of defensive coordinator at the New York Giants during their wins in Super Bowl XXI and Super Bowl XXV.

Both coaches are previous recipients of the AP NFL Coach of the Year Awards, with McVay being given the honour last season after his Rams side were beaten by the Atlanta Falcons in the playoffs.

The Rams head coach has a better career win percentage (74.3%) than his oppositional counterpart Belichick (68.5%), but has managed 390 games less than the Patriot’s Head Coach.

However when it comes to accolades, Belichick is one of the most decorated Head Coaches in the history of the NFL.

Victory on Sunday will give Belichick his sixth Super Bowl title, which would be two more than former Pittsburgh Steelers Head coach Chuck Noll who sits second in the all time list of title holders.

McVay however is only two seasons into his head coaching career, and is the youngest Head Coach to lead a side to the Super Bowl.

He’s being tipped for Superstardom and it’s no surprise to hear the Ram’s are reportedly looking into extending the Ohio natives contract. 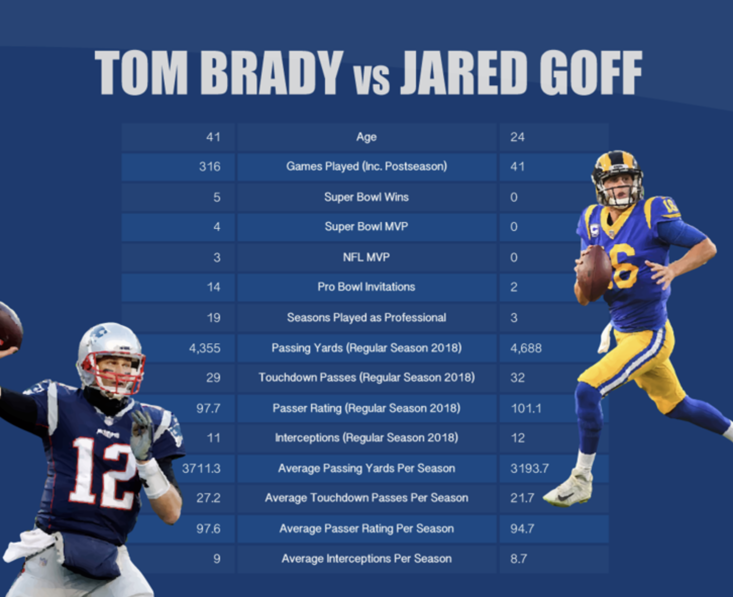 Patriots quarterback Tom Brady, widely regarded as American Football’s GOAT, will play in his 9th Super Bowl this Sunday at the age of 41.

He’s already claimed that there is ‘zero chance’ he will retire after Super Bowl LIII, and if he can help lead the Pats to victory this weekend, he will go one ahead of Charles Haley to become the first player in NFL history to win six Super Bowl rings.

All eyes will be on the performance of Brady and his opposing quarterback Jared Goff.

Goff, who is 17 years Brady’s junior, joined the Rams in 2016 and had to overcome criticism and a difficult start to his career in LA where his first seven games all ended in defeat.

In fact, the 17 year age gap between the respective players will be the biggest gap between starting quarterbacks in Super Bowl history.

Under the leadership of Sean McVay, who is renowned for quarterback development, Goff has flourished this season in particular, and has been statistically stronger in 2018 than Brady.

His number of passing yards, touchdown passes, interceptions and passing rating have all been greater than the four-time Super Bowl MVP and three-time NFL MVP.

This will be Goff’s first Super Bowl, compared to Brady’s ninth. Regardless of Goff’s greater stats this season, Brady has time and time again proven that he is a big game player over the course of his 19 year playing career.

Records to be broken 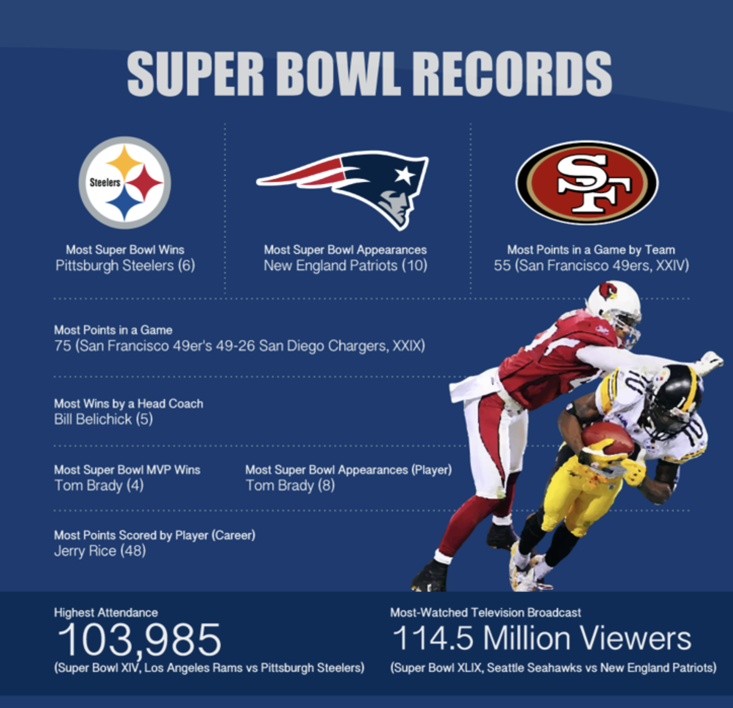 If the Patriots are to prevail Sunday then they would tie the Pittsburgh Steelers with the most Super Bowl titles in NFL history (6).

Despite being regulars in the playoffs over the last few seasons, the Steelers last appeared in a Super Bowl 8 years ago, when they were defeated by the Green Bay Packers in Super Bowl XLV.

If the Patriots were to make it six this weekend, then this would be there third Super Bowl since 2015, which includes there Super Bowl XLIX victory over the Seattle Seahawks.

The Patriots will also extend there record of most Super Bowl appearances to 11 on Sunday. They will have seven more than the Rams and three more that the Pittsburgh Steelers, Dallas Cowboys and Denver Broncos who all have the second highest number of appearances behind the Patriots (8).

Patriots quarterback Tom Brady holds 14 Super Bowl records, including the most Super Bowl appearances by a player (8) and most Super Bowl MVP wins. He will be looking to extend his collection of records on Sunday.

If his side clinch victory against the Rams, Brady will become the oldest Quarterback to win the Super Bowl at the age of 41 years and 183 days. Peyton Manning currently holds the record (39 years and 320 days) after he was victorious in Super Bowl 50 with the Denver Broncos.

Todd Gurley and Stephen Gostkowski, both the Rams and Patriots highest scorers in the regular season respectively, will be eyeing Patriot’s running back James White’s record of most points scored by a single player (20) in the Super Bowl.

Injury permitting, Gostkowski will become the solo record holder for Super Bowl appearances as a kicker (6), a record he currently shares with former Patriot Adam Vinatieri.

With the Rams and Patriots averaging 32.9 and 27.2 points per game respectively, it’s unlikely that the record for most points collectively in a single Super Bowl will be broken this year.

Super Bowl XXIX between the San Diego Chargers (26) and the San Francisco 49ers (49) produced 75 points, the most there’s ever been in a single Super Bowl.

The 21 points in Super Bowl VII between the Miami Dolphins (14) and the Washington Redskins (7) produced the lowest points in a standalone Super Bowl affair.

At Super Bowl XXIV, the San Francisco 49ers defeated the Denver Broncos 55-10, and secured the record of being the side to finish with the most points in the Super Bowl.

The Miami Dolphins have the unwanted record of scoring the least number of points in a Super Bowl contest when they were defeated 24-3 by the the Dallas Cowboys at Super Bowl VI.

One record that can be guaranteed won’t be broken at Super Bowl LIII will be the record for highest attendance. The venue for this years event, the Mercedes-Benz Stadium, at most can hold a crowd of 75,000 fans.

At Super Bowl XIV in 1980, a game contested by the LA Rams and the Pittsburgh Steelers, the attendance of the crowd at the Rose Bowl in Pasadena was an estimated 103,985. A record that hasn’t been eclipsed in the past 39 years.

Viewing figures for America’s most loved game dropped by 7.1% on the previous year in 2018, but did produce a 14.9% increase over the past 20 years. It’s still expected that 104 million plus will be tuning in for Sunday nights game.

Super Bowl XLIX between the Seattle Seahawks and the New England Patriots in 2015 drew in record viewing figures, with a whopping 114.5 million fans tuning in.

An estimated $16.2 Billion will be spent on consumables for the Super Bowl this year alone. An estimated 8.2% percent of buyers will purchase a new television for the occasion, 3.1% will invest in new furniture, 11.3% will purchase team apparel or accessories and 84.5% will fill their fridges with food and beverages.

The Super Bowl Halftime Show even sucks viewers in with no interest for the game.

This year the show will headlined by Maroon 5 with Travis Scott and Big Boi featuring as special guests. All artists involved, including national anthem performer for the evening Gladys Knight, have come under pressure to step down from their respective performances in support for current free agent, Colin Kaepernick.

The adverts that appear during the Super Bowl also generate huge interest amongst fans.

With a 30-Second advert costing a reported $5 million this year on average, ads this year will feature the likes of Serena Williams, Steve Carell and Cardi B appearing on behalf of companies including Pepsi and Bumble to name a few.

For all the stats heading into Sunday’s Super Bowl, check out the following infographic and find out how both sides compare: