Rugby League
News
Supporters were allowed in to Super League games for the first time in 14 months
Kris Voakes
10:30, 18 May 2021

Wigan Warriors, Hull Kingston Rovers and Catalans Dragons all completed fantastic comeback wins on Monday as the Betfred Super League celebrated the return of fans to stadiums with a compelling round of action.

Five of the weekend’s six planned matches were selected for Monday night action following the relaxation of Covid-19 restrictions, allowing Super League to welcome fans into stadiums for the first time since 15 March 2020. And the product on the field matched the atmospheres around the grounds as Round 6 served up a number of treats.

Wigan had to overcome a second early scare from Leigh Centurions already this season to register a sixth straight win. Having trailed 18-0 to their local rivals on opening night before coming back to win 20-18, this time around they found themselves 10-0 behind early on. But Jake Bibby scored twice and Harry Smith, Dom Manfredi, Bevan French and Liam Farrell also crossed as the 2020 Grand Finalists eventually won 30-16.

Hull KR’s third win of the season was perhaps the most dramatic match of the night, as they overturned an early 14-0 defeat away to Castleford Tigers. After James Clare and Michael Shenton had scored for the home side, Ben Crooks and Matt Parcell brought Rovers within two points shortly before the break only for Derrell Olpherts to extend the Tigers’ lead to 20-12.

Tries from Ryan Hall and Ben Crooks brought the visitors level but a Danny Richardson penalty appeared to have given Cas the points until the 78th minute, when Jordan Abdull drifted to the left edge and barged his way over to secure a 26-22 win for the Robins. 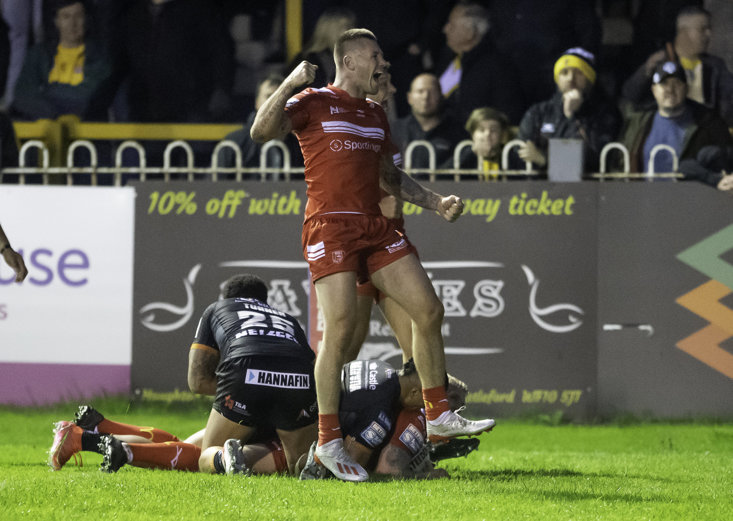 SHAUN KENNY-DOWALL CELEBRATES AS JORDAN ABDULL WINS IT FOR ROVERS

The biggest crowd of the night saw Catalans come from 10-4 with 23 unanswered points against Hull FC. In front of 5,527 supporters at the KCOM Stadium, the Airlie Birds got their noses in front thanks to Mahe Fonua and Josh Reynolds only for the Dragons to score four tries in the last 25 minutes to win with a little to spare. Sam Kasiano levelled the scores before Mike McMeeken put the French side ahead for the first time and a late brace from Tom Davies completed a 27-10 victory.

Huddersfield Giants narrowly staved off a fourth collapse of the night after seeing a 20-0 half-time lead reduced to 20-18 by Warrington Wolves at the Halliwell Jones Stadium. First-half tries from Lee Gaskell (2) and Jermaine McGillvary were cancelled out by Greg Inglis, Daryl Clark and Josh Thewlis, but a late try by Kenny Edwards ensured the Giants held on to a 26-20 win.

In the night’s final game, champions St Helens overcame a stubborn Salford Red Devils side with four second-half tries in a 28-0 win at the Totally Wicked Stadium. Leading just 6-0 at the break, the Saints added to Alex Walmsley’s try with further efforts from Theo Fages, Kevin Naiqama, Louie McCarthy-Scarsbrook and Regan Grace to retain their place at the top of the Super League table.