Shaun Lunt, the former Huddersfield Giants, Leeds Rhinos and Hull Kingston Rovers hooker, has announced his retirement from rugby league at the age of 33.

An England international and Betfred Super League winner with Leeds, Lunt played over 300 games in his 16-year career, with the vast majority of those coming in Super League. A talented ball handler, known for his scoots from dummy half and clever scrum plays, he served a number of clubs with great distinction and became one of the most respected professionals in the modern game.

Having started his career in the second tier with Castleford Tigers in 2005, the Cumbrian went on to spend three years with Workington Town before making his top-flight bow with Huddersfield in 2009. He made his first Challenge Cup final appearance that summer, coming off the bench to score a try in the Giants’ 25-16 loss to the Warrington Wolves. A year later he gained his sole England cap, playing in the 34-14 loss to Australia in that autumn’s Four Nations tournament at AAMI Park in Melbourne.

After joining Leeds on a year-long loan in 2012, Lunt got his hands on his first major silverware by playing in the 26-18 Grand Final win over Warrington as the Rhinos won a fifth Super League title in six years. Following his return to Huddersfield, he was part of the Giants side which finished the regular season in first place in 2013 before going down to Warrington in the qualifying semi-final. 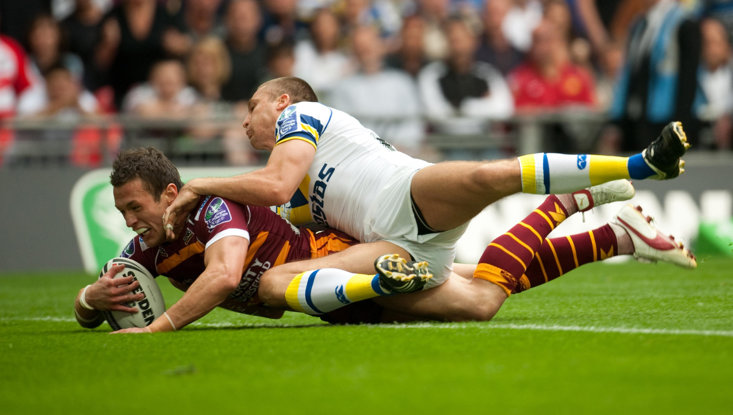 LUNT SCORES FOR HUDDERSFIELD IN THE 2009 CHALLENGE CUP FINAL

In 2015 he made a loan move to Hull KR and led the Robins to Wembley for the first time in 29 years by scoring the match-clinching try in their 26-18 semi-final win over his old adversaries Warrington. He later made his move to Craven Park permanent, going on to captain the club following their relegation from Super League in 2016.

During 2018 Lunt battled through potentially fatal sepsis after doctors discovered an abscess on his spine which had led to blood poisoning. He fought back to again play in the Super League in 2019, first with Rovers and then with Leeds as he was loaned back to Headingley for the last two months of the season.

He went on to sign for Batley Bulldogs ahead of the curtailed 2020 campaign and was set to play for Barrow Raiders in League 1 in 2021 but work commitments scuppered those plans, prompting him to call time on his career.

“Well, rugby league, it’s been emotional,” he said in a tweet confirming his retirement. “Our time has come to an end unfortunately. I’ve been very fortunate through hard work and dedication to have a career I could’ve only dreamt of as a kid.”