It’s hard to believe that it’s almost a year ago that we all watched on in awe as rugby league legend Kevin Sinfield ran seven marathons in seven days.

The former Leeds Rhinos and England skipper had set out to raise £77,777 in aid of best friend and former teammate Rob Burrow, who was diagnosed with motor neurone disease in 2019. He raised over £2 million.

This November the inspiration and the cause are the same, but the challenge is different, as Sinfield explains:

“I’m going to run from Welford Road Stadium, Leicester Tigers, who are my new employer, back to my old employer, Leeds Rhinos, in 24 hours. It was planned to be 100 miles, it’s turned out to be 101, so we’ve called it ‘The Extra Mile’.” Kevin and his support team will aim to complete the challenge in 24 7km stretches, with whatever time is left in each slot allocated to rest.

At the very height of his powers as a rugby league player, Sinfield was a supreme athlete, and indeed when you look at him now he still looks in good enough shape to play a few more seasons. This challenge, though, is sure to stretch his physical and mental strength to the limit.

“To be honest with you, I’m probably winging it a little bit. I’ve read up that this is 16 times harder than a marathon, to jump up from marathon distance to 100 miles should take six to nine months' training. We’ve not got six to nine months. We’ve got about a month to prepare.”

If anyone else were to say this sentence before taking on an endeavour like this, it would set alarm bells ringing. But Kevin Sinfield isn’t a normal human being. Alongside his athletic prowess, Sir Kev is a man driven by something that puts him in better stead than any amount of training.

“People are getting diagnosed with MND daily and some are only being given six to nine months to live, so we haven’t got that long to train, we have to move now and try to show people how much we care sooner rather than later.

“Some of it we’ll be crossing our fingers for the weather to be kind, but ultimately we’re just going to go and have a crack.” 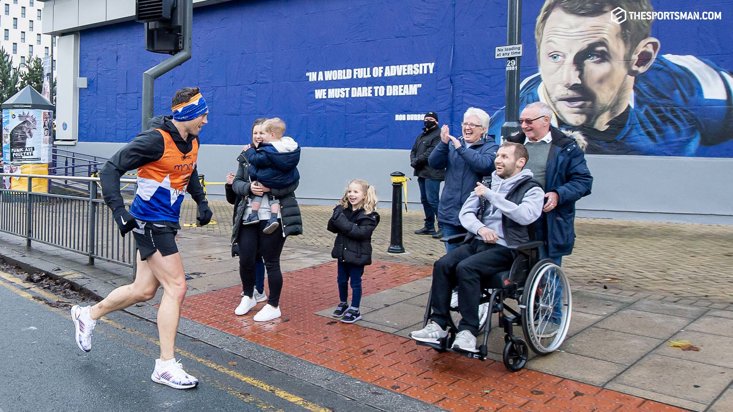 Kevin has been at the spearhead of a movement that has seen millions of pounds raised by the rugby league community in the last few years, and whilst that money will go on to help the lives of countless people, at the heart of it is a mate who he insists would do the same for him.

“Rob got diagnosed about 20 months ago. Since then the whole sport has come out and shown how much they love and care about Rob, and as a former player and teammate it’s important that we come out and do the same.

“He’s a good friend. I absolutely know he would do the same for me and anyone else who was in that team. It’s important we show him how much we care about him, but also show the rest of the MND community how much love and care we have for them too. “

Sinfield was a cult hero at the Rhinos, a key part of the ‘Golden Generation’ that delivered the most successful spell in the club's history. His exploits after rugby, however, have resonated far outside of the postcodes of Headingley.

Last year's marathon challenge caught the attention of the national media, especially BBC Breakfast, who have covered his journey extensively, and this in turn captured the hearts and minds of people all over the country. 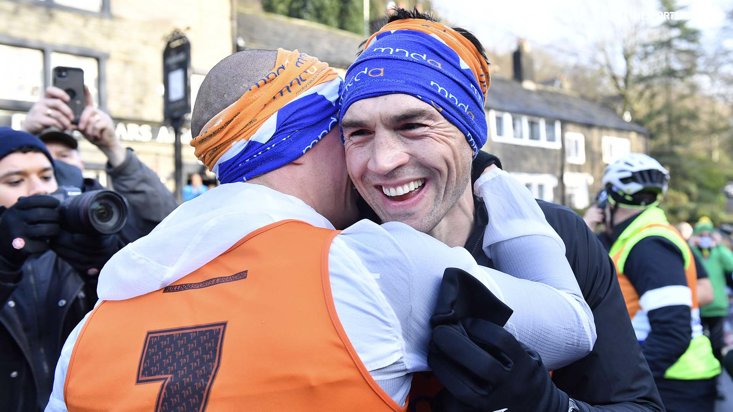 “We all really enjoyed last year, we got so much from it. If we had just hit our target of £77,777 we’d have been over the moon, if it had fallen short we might have been a bit demoralised, but for it to do what it did, and to see the hope we provided to so many people out there in what has been a really difficult 18 months for everyone has been fantastic, and we all felt like the Ready Brek man.”

The target this time around is £100,000, but whether he reaches this, falls short or surpasses it 10 times over, you can guarantee that Kevin Sinfield will keep doing this until a cure or treatment is found.

“We just have to keep fighting,” he explains. “We have to keep going. Rob is the inspiration and the drive behind this but I’ve met people throughout the UK who are challenged by this disease. We have to try and help. I’ve been made a patron of the MND Association which is something I’m really proud of, and I’m just going to keep doing my bit to help.”

He’s already done more than that, if he had called it quits after last year's achievement, no-one could have accused him of not doing his bit to help, and yet here he is again, ready to push himself to the limit.

In the words of the great Rob Burrow MBE: “Everyone needs a friend like Kevin Sinfield.”

You can donate to the Extra Mile Challenge here.