Swansea City's seven year spell in the Premier League has come to an end. Stoke City came from a goal down to win just their second away game of the season at the Liberty Stadium, relegating the Swans and leaving Carlos Carvalhal on the brink.

It was a low-quality affair in Wales that seemed to summarise Swansea's season, with Sam Clucas and Andre Ayew wasting several big chances in the second half to highlight the club's goalscoring woes in 2017/18. They finish the season as the Premier League's lowest scorers with just 27 from 38 matches.

Stoke moved off the bottom of the table with the win, courtesy of first-half goals from Badou Ndiaye and Peter Crouch, giving the travelling supporters some optimism about life in the Championship as the Potters ended a run of 13 matches without victory.

In a tame opening at the Liberty Stadium a speculative long-range shot from Xherdan Shaqiri, comfortably saved by the goalkeeper, was the only notable action – that is until the Swans sprang into life in the 12th minute.

Jordon Ayew fired a freekick into the wall, leading to a brief goalmouth scramble in which Ayew's shot on the stretch was blocked by Jack Butland. Stoke suddenly looked shambolic in defence, and moments later the back four was split wide open by a simple ball forward and an Andre Ayew knock down. Andy King ran onto the ball to drive a low shot beyond the keeper.

The hosts were livelier after the goal, throwing men forward in a desperate hunt for further goals, while the ever-so-slightly optimistic Swansea fans began to chant "we only need nine more". That was perhaps a tad ambitious, although they did almost double their lead within three minutes of the opener, Wayne Routledge curling a shot wide of the post.

Routledge was involved in the next attack, his looping header gathered comfortably by Butland; it was hardly free-flowing attacking football, but Swansea were at least pushing hard for the second goal.

Too hard, it turned out. Their desperation to make up the goal difference gap to Southampton left Swansea vulnerable to counter-attacks, and on the half-hour mark Stoke grabbed an equaliser. Shaqiri drove down the right in acres of space on the breakaway, before cutting infield and cleverly clipping a through ball over the Swansea defence to Badou Ndiaye. The Senegalese midfielder's expertly timed run put him clean through on goal, and after taking a touch to control the ball Ndiaye lobbed Lucas Fabianski to dampen any vague sense of hope that had been brewing in south Wales.

Swansea City AFC
@SwansOfficial
It ends in defeat at the Liberty. Our seven-year @premierleague adventure comes to an end… 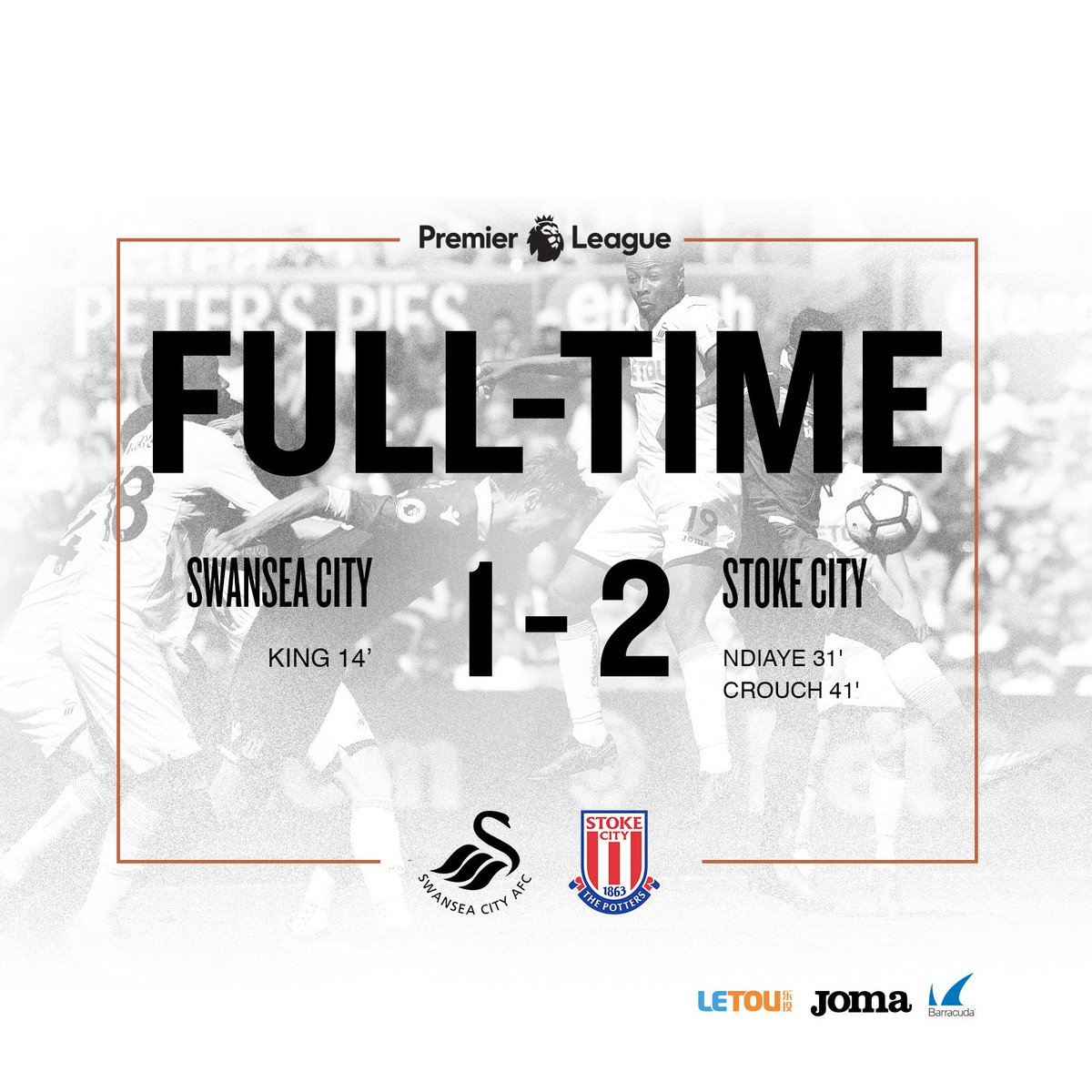 The atmosphere quickly became toxic as the home fans began to vent their anger at the board, and yet worse was still to come. 18-year-old debutant Lasse Sorensen whipped in a freekick from the left-hand side and Peter Crouch nodded home with a stooping header, scoring the 1000th goal of the 2017/18 Premier League season to finish off the Swans for good. Cue a chorus of boos around the Liberty as the players slinked, heads down, back towards the centre circle. The half-time whistle came as a blessed relief.

The second period was even slower than the first, but after ten quiet minutes Stoke were awarded a penalty after Martin Olsson handled needlessly in the area. Shaqiri's fairly weak penalty was stopped by Lukasz Fabianski, a moment of poor quality that summed up this remarkably lethargic half. Both teams seemed resigned to their respective fates, unable to rouse themselves one last time before a summer of soul-searching.

That is, until the 70th minute when Swansea began to play some tidier football and forced Butland into a couple of saves. First Andre Ayew dribbled past several bodies but couldn't squeeze his shot into the back of the net, and then Sam Clucas's effort was superbly tipped around the post by the England goalkeeper.

The Swans kept knocking at the door but somehow couldn't find the equaliser they deserved. Leon Britton, in his last game for the Swans, played a superb ball to Clucas but his effort was parried by Butland. The rebound fell for substitute Tammy Abraham, whose poked shot was cleared off the line by Kurt Zouma.

Naturally Swansea's flurry of activity once again left space for a Stoke breakaway. Ndiaye thought he'd scored his second of the afternoon after slotting into the corner from a Shaqiri through ball, only for the linesman's flag to deny the Senegal international.

Swansea had a couple more half chances as the game wound down, although nothing much to trouble the Stoke keeper. A miraculous escape was always a long shot, but fans can rightly feel aggrieved to see their Premier League journey end with such a whimper.