This is a special Italy side. Not only have they reached the semi-finals of Euro 2020 in a remarkable response to their generational low in World Cup qualifier in 2017, but they have done it with a vibrant, vivacious swagger the like of which so few Italian teams of years gone by have adopted.

Their 2-1 win over Belgium in Friday’s quarter-final in Munich saw them take their biggest scalp yet in this swashbuckling attempt to repay a nation which so recently was reeling from World Cup heartbreak with a first European Championship title in 53 years.

Roberto Mancini, a manager whose stock had slumped in recent years after a trio of forgettable spells at Galatasaray, Inter and Zenit St Petersburg, now has the Azzurri attacking at will in huge numbers even when leading, whereas previous Italian sides would have been doing what they could to maintain their advantage.

That is not to play on the Italian stereotype of catenaccio and all that. Think back to so many tournaments past. There would be long spells of games in which Italy would prioritise caution, with counter-attacks being administered in ones and twos. The sight of left-back Leonardo Spinazzola bombing into the penalty area beyond striker Ciro Immobile on Friday was the perfect representation of what Mancini has injected into the Azzurri.

Perhaps it was no surprise that Spinazzola pulled a hamstring late on, such is the ground the Roma man covers in this most dynamic of approaches. Built around the quite excellence of Nicolo Barella, Marco Verratti and Jorginho in the centre of the park, Italy again thrilled the neutrals as the world’s number one ranked side were sent crashing out. Lorenzo Insigne, once more, did so much of the damage in the final third.

Of course, the solidity remains too, and the sight of skipper Giorgio Chiellini returning to the starting lineup after injury was a huge boost. He and Leonardo Bonucci renewed acquaintances at the heart of the defence and gave their side the platform from which to go and make hay. 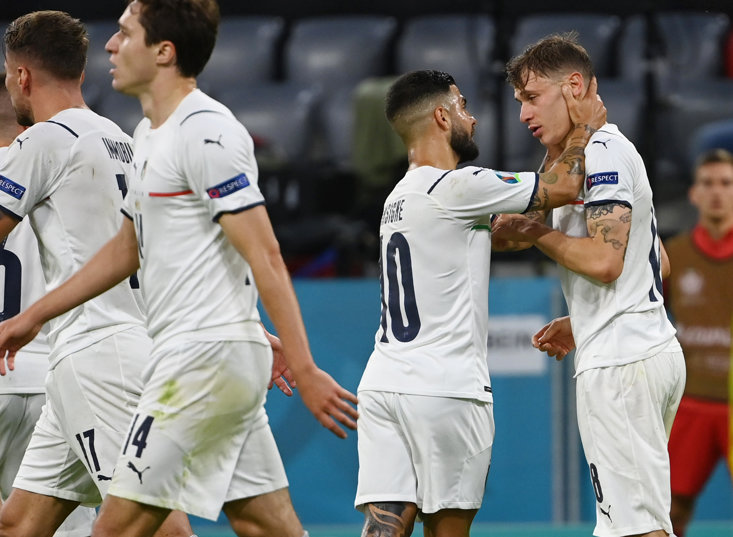 BARELLA AND INSIGNE SCORED THE VITALS GOAL FOR ITALY

Bonucci had even appeared to have got on the scoresheet inside the first 15 minutes, chesting home a bouncing ball inside the six-yard box as Belgium struggled to deal with a right-wing free-kick. But the goal was overturned by the VAR after the Juventus centre-half was shown to be marginally offside.

It mattered little, because Italy went straight back onto the offensive, and on the half-hour mark Barella finished off a sweeping attack after Belgium had given the ball away cheaply, the Inter wide man’s strike across goal leaving Thibaut Courtois with little chance.

The best was still to come, though. Lorenzo Insigne, who earlier had seen a curling effort handled easily by Courtois, picked the ball up in centre field, ran at the cowering Belgian backline and sent an arcing masterpiece of an effort sailing beyond the goalkeeper’s hand and into the far top corner. It was a goal which matched the beauty of Italy’s performance, and a two-goal lead which reflected their dominance.

The margin was halved within three minutes, as Giovanni Di Lorenzo’s ill-advised challenge on Jeremy Doku resulted in a penalty and Romelu Lukaku finished with aplomb. It was a moment which would have shaken other sides, and one which we have already seen change games in this tournament.

But Italy went on looking for more until very late in proceedings, and only when Belgium up the pace in the closing 10 minutes did the Azzurri start to add numbers behind the ball. Their thrilling approach to the vast majority of the match was deserving of a few moments to catch their breath.

Next up for Italy is Spain, a team which did for their hopes in European Championships in 2008 and 2012 at a time when La Roja were the star attraction. When they meet at Wembley on Tuesday, it is the Azzurri who most of the neutrals will be desperate to watch.

That says so much about just how good a job Mancini has done to change the perception of Italy. Two more performances like this one, and they’ll have turned World Cup failure into a European title inside four years.