Football
News
It was 30 years ago today that Lineker made a quiet exit from the international stage
Kris Voakes
08:35, 17 Jun 2022

For a generation of English football fans, penalties have been the buzzword when talking about major tournament failures for the men’s national team. The Three Lions’ hopes at Euro 2020, Euro 2012, the 2006 World Cup, Euro 2004, the 1998 World Cup, Euro 96 and the 1990 World Cup have all ended from 12 yards.

But back on June 17, 1992, there was a very different narrative after England’s group stage exit from the European Championship. This disappointment came down to three things: Graham Taylor, Gary Lineker and turnips, apparently.

Taylor was an unpopular England manager already. Having taken the reins from the great Sir Bobby Robson in the wake of a World Cup semi-final at Italia ’90, the former Aston Villa boss’ England side played an unattractive style of football. His selections were also contrary to what many fans seemed to be pushing for.

In only his third game in charge he decided to drop Paul Gascoigne to the bench for a trip to the Republic of Ireland and would later phase out the likes of Peter Beardsley and Chris Waddle in favour of more pragmatic choices such as Carlton Palmer, Tony Daley and Andy Sinton.

At Euro 92 the selection issues reached boiling point. Two centre-backs – Keith Curle and Martin Keown – were chosen at right back in the draws with Denmark and France, and for the crucial third fixture against hosts Sweden in Solna it was David Batty, a midfielder at Leeds United, who lined up on the right of defence.

But one man who had been a regular throughout was captain Gary Lineker, who had announced in the run-up to the tournament that he was to retire after the Euros ahead of the start of his Japanese adventure with Grampus Eight.

After Lineker had set up David Platt for the opening goal of the night inside four minutes in Solna, England looked set to make a safe passage through to the semi-finals. But Jan Eriksson’s equaliser early in the second half rocked the Three Lions and they needed a goal from somewhere. 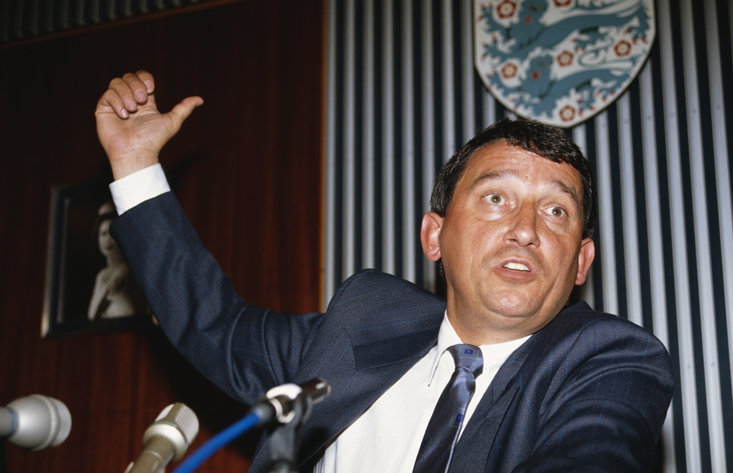 Taylor, rather than deciding to throw on a young Alan Shearer at a time when he was just beginning to show his ability in front of goal at the top level, went for the more conservative option of Arsenal’s totem striker Alan Smith. But the unpalatable part of the substitution for many England fans was the identity of the man Smith was replacing for the final half-hour: Gary Lineker.

As feared, that proved to be Lineker’s final act in an England shirt. Tomas Brolin’s magnificent winner after a sublime one-two with Martin Dahlin consigned England to the bottom of Group One. It also turned Lineker from incumbent England captain and scorer of 48 goals for his country into retired international and nearly man. With one more goal he would have equalled Sir Bobby Charlton’s then-record for strikes for the Three Lions.

‘Swedes 2, Turnips 1’ blasted a headline in The Sun the following day, and whenever England struggled under Taylor’s leadership thereafter the Lineker episode was quickly identified as one of the manager’s failing points. The images of him bedecked with a turnip for a forehead were over the mark even at the time, and they only appear worse when viewed with a modern eye. But Taylor was done in the eyes of public opinion, and the failure to reach the 1994 World Cup inevitably brought about his sacking.

“A great deal was made of my withdrawal of Lineker in our last game of the tournament in Sweden,” Taylor explained years later. “I took a lot of stick over that but I will maintain, until the day I die, that was a purely footballing decision.”

Whatever you make of Taylor’s choices, the one thing everyone would have wanted was a very different final act in an England shirt for Lineker.