World champions France have been dumped out of Euro 2020 on penalties by a Switzerland side who simply refused to be beaten. A last-gasp equaliser from Mario Gavranovic sent an incredible game into extra time after a 3-3 draw, and it was the underdogs who remarkably came through 5-4 on penalties.

It was a remarkable result for a nation who have so often struggled to get past this stage in major tournaments, let alone against the world champions. They showed huge hunger and desire to fight back when they looked dead and buried, but this so far has been the tournament for the underdog,

France go home with their tail between their legs having been huge favourites heading into the competition, yet in their first penalty shootout since the World Cup final in 2006, they once again lost. Karim Benzema and Antoine Griezmann had been substituted before the shootout, and it was Kylian Mbappe of all people, who missed the crucial penalty.

Earlier in the night, it was Euro 2020’s assist king Steven Zuber who provided the Swiss opener for Haris Seferović. He bullied Clement Lenglet and rose highest to head home a perfect opener, and nobody at the tournament has now bagged more assists than Zuber, who recorded his fourth of the tournament against the world champions.

That shocked the favourites, but not into instant action as the sluggish French trailed at the break. Then, Karim Benzema, who recently returned from a six-year absence from the national side, took centre stage.

A quick word in the ear of Hugo Lloris helped the France No.1 save Ricardo Rodriguez’s crucial penalty, and although Benzema will want to claim some of the glory for that one, the Tottenham keeper gets all the credit for the stop that saw France cling on to their hopes of a World Cup and Euro double. 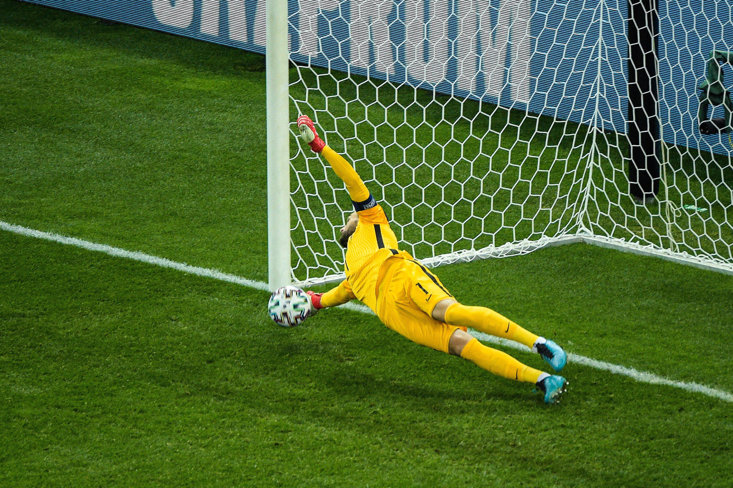 That penalty save was in the 55th minute, but in the four minutes that followed, we were treated to the Benzema show. Having already scored twice in the competition so far, he stepped up with two goals in four minutes and three seconds.

The first was a magisterial work of art. Mbappe, who was kept quiet by a tough Switzerland back-line, laid it through to the Real Madrid forward but the ball was behind him as he ran towards goal. With one swift movement he dragged the ball through his own legs with his left foot, before clipping the ball over Yann Sommer with his right. The ‘Formula One’ car had roared onto the international stage.

There was work still to be done but two minutes later Benzema had completed the turnaround. Antoine Griezmann’s shot was parried by the goalkeeper and turned in from close range by the man who now surely has his eyes on the Golden Boot, just one goal behind Cristiano Ronaldo’s five for the tournament.

Once the Benzema show had turned the game on its head, the drama wasn’t over. Paul Pogba produced perhaps the most overcomplicated celebration of the Euros after curling an absolute beauty into the top corner from 30 yards, and although the game looked over, Switzerland kept battling.

We saw Croatia stage a late comeback against Spain in the earlier game, but few would have had money on the Swiss doing the same thing. Seferovic had other ideas as he thumped home another header 10 minutes from time, and then a French side that had impressed in the group stage conceded in added time.

Substitute Mario Gavranovic ran onto a Granit Xhaka pass and curled the ball past Lloris from the edge of the box, sparking chaotic scenes on the Swiss bench and in the crowd. Somehow, for the second consecutive match, a side had come back from 3-1 down to force extra time in the final minutes of the game. In fact, only last Wednesday’s final day of group fixtures has seen more Euros goals (18) than today (14) in the competition's history, and there were twice as many games that day.

Extra time was not quite as dramatic, as both sides came to terms with an enthralling 90 minutes, with Mbappe missing from close range after another brilliant through ball from Pogba. Nerves crept in, Giroud saw his header saved in the final minute and the game would be decided from the spot.

But Switzerland eventually came out on top, and Spain await in the quarter-final with both needing to catch their breath after an extraordinary day of football.