Football
News
Glasgow City's quest for a 15th successive league championship could be rocked by the arrival of the Old Firm clubs
Graham Semple
10:35, 27 Feb 2022

Glasgow City have become a sporting success story few could have imagined when the club was formed in 1998.

Carol Anne Stewart and Laura Montgomery co-founded the club with one clear objective - to provide girls and women with a chance to be involved in the beautiful game at a time when opportunities were rare.

The pair have developed and honed a winning machine. City’s honours list since inception is impressive and lengthy; in 24 years, 30 domestic trophies have been collected, and the quest for a 15th successive league championship is well underway.

The club has an insatiable desire to remain the best, and they made a significant decision before the current campaign. "We turned professional at the start of this season,” City's chief executive officer, Laura Montgomery, proudly explained.

“Every single player in our first team is a full-time professional. All our staff are full-time and that was a big thing that I wanted to happen. A lot of my focus has been trying to make us professional on and off the pitch. We used to do a bit of a hybrid model, but now we train during the day.”

A move into the professional ranks is a big step forward for Scotland’s premier club side - and it was perhaps a necessary move due to the significant investment recently made by the Old Firm into their respective women’s teams.

The champions have embraced the renewed threat coming from Celtic and Rangers. “I think the more investment in the women’s game across the world the better,” acknowledged Montgomery.

“We have always had strong challenges in the league. Celtic and Rangers have always had more money than us to spend in different areas. It's fantastic that we now have three teams that can offer full-time professional opportunities for players - and several other clubs are providing semi-professional opportunities. It is a giant leap forward from where we were a decade ago.”

Two years ago, Rangers made their intent clear when they purchased Scotland internationalist, Nicola Docherty, from City. Three former teammates soon followed the defender to Govan; Kirsty Howat, Rachel McLauchlan and Sam Kerr all traded orange and black for blue and white. 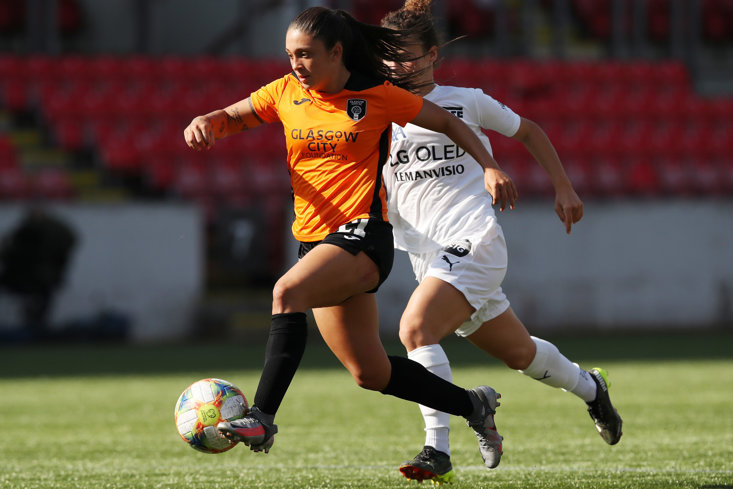 The quartet wore the colours of their new club as Rangers overcame City 5-0 before the winter break last season. It was an eye-opening result, yet the assumed demise of City never materialised.

"It did not really feel like a 5-0 game,” noted Montgomery. “We were certainly not overrun by Rangers, but they played well and took their chances very well. I never looked at that result and thought the pendulum had swung. I think everyone assumed that, but there was so much context to that particular game that was ignored. To a large extent, I was quite happy people thought ‘Glasgow City are finished' when it was certainly never going to be the case.”

A well-executed recruitment drive in the January transfer window helped City withstand significant pressure from the chasing-pack and finish at the top of the pile. Creative signings from Costa Rica, Iceland, Ireland, South Africa and Sweden ensured the league trophy remained a resident at Petershill Park.

“It’s usually me watching a lot of videos,’ joked Montgomery, whilst explaining her side's transfer policy. “Every successful company has to forward-think and we are always analysing the squad. We track certain players for years, and you can like certain players, but contract wise, they might not be in the position to leave, or it might not be the right opportunity for them.

City have entered a transitional phase after a lengthy period of stability. Scott Booth recently vacated his managerial role after six years in charge and Scotland’s most decorated player, Leanne Ross, retired at the end of last season. Personnel changes happen, but the club’s ethos never does.

“We want to remain competitive and have a successful first team,” explained Montgomery as she addressed the future. “We also want to have an Academy that helps bring players through to play for the first team, but importantly, we want to be the club that creates many opportunities for girls and women.

“We will always be a club where, if you want to play football, and you want to play for Glasgow City, we will enable that to happen through our community arm. We are built on creating opportunities for women and girls because they never used to exist - and we will do everything we can to make sure that continues.

“We do a lot of work through our charitable foundation and will continue to do so.  It is so important that we utilise the good feeling that exists in the women’s game and that our club continues to help change opportunities and perceptions for girls. All that is so important to our club, and that is just as important as having a successful first team. It is much wider than just trying to win the SWPL every year.”

The defending champions are in the midst of another title battle. Rangers sit clear at the top of the table with a two-point advantage and a game in hand, but City have shown time and again - domestically and in Europe - they can never be counted out.