Football
News
The former City man is starting to see his influence grow on his young team
Alex Keble
09:05, 20 Feb 2020

Sunday’s 4-0 win over Newcastle United could prove to be a landmark moment in the Mikel Arteta project, despite the fact that for the first 45 minutes Arsenal were far from their best. It is fitting, really, that the new manager’s best result so far came in one of the most confused and clumsy displays; it hasn’t been smooth sailing for Arteta so far and results have rarely matched performances.

Even in the second half, the tactical aspects of Arsenal’s game didn’t conform to what we have seen most often over the last few months. Instead, the goals came in sudden bursts of pace down the flanks, reflecting the disordered individualism of the Unai Emery era. If it is to be the catalyst for the beginning of the rise – the moment the Gunners learnt to convert draws into wins – then it will be because of Arteta’s motivational influence.

Just like the FA Cup victory over Leeds United, which by all accounts required a lot of shouting at the break to inspire improvement, a switch was flicked against Newcastle. Here is a man who clearly commands the respect of the dressing room. It is a prerequisite of any head coach looking to deploy tactics with excruciating positional detail.

Prior to the Newcastle game Arsenal had gradually, and tentatively, begun to look like a team coached by one of Pep Guardiola’s disciples.

Arsenal line up in a 2-3-5 when in possession, with a front five alternating dropping off and making runs in behind so that no two players occupy the same zone of the pitch horizontally or vertically. From left to right: the left-back pours forward; the left winger cuts inside to make runs ahead of the striker; the centre forward and number ten occupy the other central spaces; and the right winger holds width on the right.

The idea is to hold patient possession, awaiting opportunities to break the lines and suddenly up the tempo, with the centre-backs and central midfielders key players in seeking that vertical ball forward. Long diagonals into the wide men – width is an important feature – is encouraged to get the ball into the final third at speed, and once arrived the front five interact in ways automated on the training field. 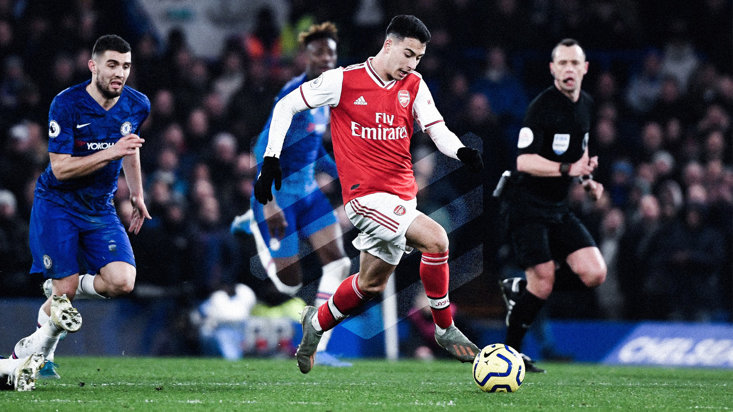 These automations – moves planned several steps ahead, etched into muscle memory over time – are a crucial aspect of the modern game. They mark out the elite managers like Jurgen Klopp and Guardiola from the rest. In small bursts, Arsenal are showing signs of attempting to create them.

They are most notable on the left flank, where Saka’s runs are dragging the opposition full-back wide to create space for Pierre-Emerick Aubameyang – who has scored four goals in his last six games. He, like Gabriel Martinelli, is benefitting from arriving late into the penalty area, ghosting unseen into dangerous positions.

Things are less certain through the middle because Mesut Ozil isn’t a long-term solution. For Arteta’s system to work, he needs dominant, influential playmakers roaming the number ten space like Kevin de Bruyne and David Silva at Man City. Ozil, by contrast, is guilty of drifting in and out of matches.

Defensively, shielding against the counter-attack is vital to any high-pressing possession side, and Arteta is achieving this by tweaking the roles of Granit Xhaka and the right-back (Ainsley Maitland-Niles or Hector Bellerin). Xhaka is improving because his role – and zone of the pitch – has been minimised; he holds his ground now, leaning to the left to cover for the marauding left-back Bukayo Saka.

The right-back tucks infield in an inverted position, forming a three-man central midfield that spreads across the pitch to block counter-attacking routes out. Arsenal will remain vulnerable until they get some defensive upgrades, but they have at least improved on the porousness that defined Emery’s final months.

There is a long way to go before Arsenal are playing with the fluency or efficiency we have seen from Guardiola’s Man City in recent years – and counter-intuitively a thumping 4-0 win over Newcastle is a stark reminder of that fact.

They will continue to float through matches, showing only flashes of automated moves in the final third, until Arteta has had at least one summer at the club to drill his tactics into the squad. And yet, despite the litany of draws that have left the club in mid-table, Arsenal fans have a lot to be excited about.

Arteta’s tactical acumen and motivational skills have already had an impact. He looks like the real deal – and the right man to lift the Gunners back towards the top end of the Premier League table.