Cricket
News
Tailenders is like a regular catch-up with your mates in a time when that has otherwise proven to be impossible
Jack Porter
08:00, 24 Jan 2021

At the moment, we’re all enamoured with cricket, thanks to India digging in and out-saucing the Aussies Down Under, with all the elements against them, one down, without their captain and a host of first-choice players, at the Gabba, and yet completing one of the great comebacks in one of the great Test series. We understand the need for a further fix for the most enduring of sports.

“It was meant to be in all honesty, it wasn’t supposed to go this well. It was only ever  going to be a ‘six episodes and see how it goes lads’ type thing.” Two years on, the Tailenders podcast has gone way past a century.

Greg James has proven to be one of the best Radio One presenters to ever steer the heralded Breakfast Show slot, with his unyielding, unapologetic onus on connecting the listener with the station, putting a bit of glitter on the ordinary working day, making each member of the audience feel a vital component of both his and the station’s success. That isn’t an easy feat. His shift doesn’t stop at 10:30 am, however. And he’s not alone.

Greg is joined by England’s greatest-ever bowler, Jimmy Anderson, and The Maccabees guitarist, Felix White, with an alternative (and sometimes musical) look at cricket in this jovial weekly show delving into a carousel of cricketing chat. It’s so affable and easy-listening, it’s even lazy to use the cliché that you don’t even have to like the sport to enjoy it. From that improvised, ten-cent jingle, you know what you’re in for. 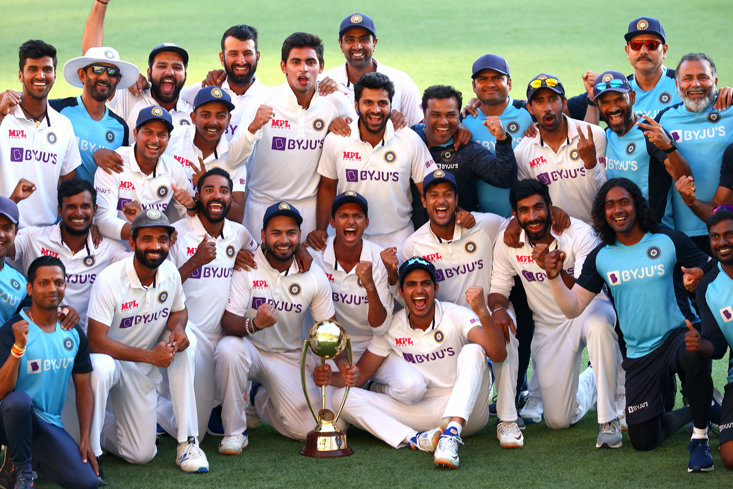 Upon hitting 99, James commented on the show’s surprising longevity. “I want to say thank you to two of my very best mates, Jimmy and Felix,” said the amiable Radio One man, “No matter what else we have on, there’s always time for a Tailenders record. And let me confirm to you that the friendship you hear on the pod very much spills over into real life. Two of the kindest p***-takers you could ever wish to meet.

“An enormous thanks goes also to Mattchin, the greatest addition to my life in the last few years.”

He is of course referring to occasional cult hero guest, ex- Bristol City youth team player turned shoe salesman, the man who calls the Little Master ‘’Uncle Sach’, despite having the most tentative link to the greatest cricketer of all time, Mattchin Tendulkar.

Tailenders has been a brilliant listen for several years but has served a greatest purpose during lockdown. With recent episodes enthusiastically discussing Australia’s first defeat at The Gabba since 1988, it’s a regular catch-up with mates when that has otherwise proven to be impossible.

“It helps all of us through life, and this podcast was always meant to show that - to be the ultimate celebration of all the reasons why we love cricket,” said Greg, “It’s a true privilege to hear why you all adore the game as much as we do.”

x
Suggested Searches:
Manchester United
Liverpool
Manchester City
Marcus Rashford
Premier League
More
cricket
Ben Stokes' Break From Cricket Highlights The Strides Made On...
It is a truly wonderful thing that Ben Stokes will not be in England’s Test squad to face India [ ... ]
cricket
Ryan Sidebottom: England's T20 Hopes Have Received A Huge Boost...
We’ve seen the likes of Jonny Bairstow, Ben Duckett and James Vince flashing the bat to great [ ... ]
cricket
Ryan Sidebottom: The Hundred Is ''Off To A Great Start'' After...
Ryan Sidebottom believes cricket's divisive new tournament 'The Hundred' proved [ ... ]
cricket
Ryan Sidebottom: Why The Hundred Is A Game Changer For Women's...
For women in particular, The Hundred is huge. Ahead of the first ball being bowled it has had its doubters [ ... ]
cricket
England Can Dream Of Another World Cup Win, Two Years On From...
“By the barest of all margins.” The inimitable Ian Smith couldn’t have summed it up [ ... ]
cricket
The Newcomers Looking To Help Fire England To An ODI Win Against...
An inexperienced England are facing a huge test as they have been forced to name a brand new 18-man [ ... ]
cricket
Perennial Finalists New Zealand Finally Come Good To Win World...
New Zealand finally got the job done. In 2015 they were the entertainers of the tournament at the Cricket [ ... ]
cricket
Sophia Dunkley Is England's Newest Cricketing Icon That Can...
Sophia Dunkley is a history maker. She became the first black woman to play Test cricket for England’s [ ... ]
cricket
ECB Right To Suspend Ollie Robinson As Cricket Looks To Learn...
Culture Secretary Oliver Dowden joined a number of outspoken critics of the ECB’s suspension of [ ... ]
cricket
New Zealand Bring Desire, England Are Just Dire As First Test...
When New Zealand could have batted for a draw, they went hell for leather on the final day at Lord’s. [ ... ]
cricket
''I Can Still Improve'' Jimmy Anderson Part Of Resurgent Older...
Whisky. Fine wine. Jimmy Anderson. Just three things that get better with age. England’s highest [ ... ]
cricket
World's Best Cricketer Ben Stokes Has Become England's Imperfect...
If there is one thing the British public love more than an underdog story, it is a tale of redemption. [ ... ]
cricket
England Just Fall Short Against India Despite Sam Curran Heroics...
England came up short against India, losing by just seven runs in an absolutely thrilling ODI decider [ ... ]
cricket
England’s Aggressive Batting Pays Off As Bairstow And Stokes...
When England’s top three bat like this, there is simply no side in the world that can stop them. [ ... ]
cricket
Three Years On, Steve Smith Deserves Big Praise For His Response...
On this day three years ago the entire sporting world collapsed on Steve Smith’s shoulders. In [ ... ]
cricket
Root's Calm Head Missed As England Collapse To 66-Run ODI Loss...
India have defeated England by 66 runs in the first one-day international in a game that will once again [ ... ]
cricket
India T20 Win Over England Could Be Perfect Precursor To 2021...
England have lost the T20 series in India 3-2 having been comprehensively beaten in the final match. [ ... ]
cricket
Blistering Buttler Leads England To Bounce-Back T20 Win Over...
England showed their resilient side on Tuesday as they bounced back from Sunday’s defeat in the [ ... ]
cricket
Kohli Takes Centre Stage As England Come Up Short Against India...
England came up short in the second T20I match v India, losing by seven wickets as Virat Kohli proved [ ... ]
cricket
Archer And Roy Star As England Sweep India Aside In Opening...
England began Twenty20 World Cup year in emphatic fashion as they hammered India by eight wickets in [ ... ]
cricket
Weather No Excuse, England Must Learn From Woeful Batting Performance...
How quickly things can change. England’s 227 run win in the First Test v India feels like a lifetime [ ... ]
cricket
Why A Massive Fourth Test Against India Could Define England's...
England’s whole year might well ride on the outcome of Thursday’s Fourth Test against India. [ ... ]
cricket
Brittle England Beaten Inside Two Days As India Survive The...
It was one of the most chaotic days of Test cricket ever but by shortly after tea on day two in Ahmedabad [ ... ]
cricket
Sidebottom Wants To See Both Broad And Anderson Play Third Test...
Former England bowler Ryan Sidebottom says England ought to select both Stuart Broad and Jimmy Anderson [ ... ]
cricket
The Hundred Can Help Revolutionise Women’s Cricket And Inspire...
The long-awaited The Hundred competition is set to revolutionise cricket and will finally kick off this [ ... ]
cricket
Should Test Cricket Lose The Toss After India's Battering Of...
England have nobody to blame but themselves for the manner of their 317-run mauling at the hands of [ ... ]
cricket
Sidebottom Hails ''Fantastic'' Root And ''Stunning'' Anderson...
Ryan Sidebottom has heaped praise on both Jimmy Anderson and captain Joe Root following England’s [ ... ]
cricket
Fantastic Jimmy Anderson Wraps Up A Statement England Win In...
England wrapped up a dominant First Test win over India on Tuesday, with Jimmy Anderson collecting three [ ... ]
cricket
100 Up! Joe Root's Timely Form Could Be The Difference For England...
He is the baby-faced batsman who slotted into England’s line-up in India in 2012-13 and immediately [ ... ]
cricket
The New Book Shining A Light On The Biggest Scandal In Cricket...
It has been nine years since the News of the World ceased publication. Nine years. Doesn’t time [ ... ]