All eyes will be on Conor McGregor this weekend as he makes his return to the Octagon after another year out of the game. The Irishman, as always, will have a giant following (perhaps virtually in this case) as he looks to climb his way back to the top of the UFC game. With only two fights since 2016, many people will be tuning in to see if the Notorious still has what it takes at the age of 32.

But what about the man facing him, the man who already fought him seven years ago, and the man who will be hoping to cause an upset at UFC 257 in Abu Dhabi on Saturday night? Who is Dustin Poirier?

Let us start with the fighter. The American is the same age as McGregor and, like his rival, he’s grown and gone up a weight class since that first fight back in 2014, which resulted in a knockout defeat for the man they call ‘The Diamond’. At featherweight (145lb), Poirier always seemed to be limiting himself, but at lightweight (155lb), with extra muscle around his neck and shoulders, he seems much more comfortable and perhaps less likely to be stopped by ‘Notorious’ this time around. 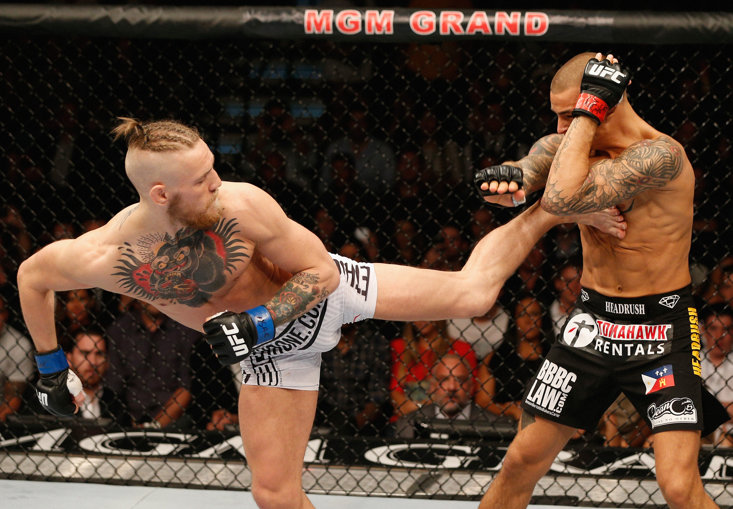 Now ranked number two in the lightweight rankings, behind only Khabib Nurmagomedov and Justin Gaethje, and having been in the game since 2009, Poirier is a talented and tough fighter who can cause anybody problems on his day. McGregor is expected to come out quick and put the pressure on Poirier in an attempt to repeat his early knockout of 2014, but if Poirier can get through those first two minutes without being caught by that left hand, he has a real chance of winning this fight. The longer it goes on, the more chance Poirier has of asserting his own game onto McGregor.

Poirier’s career has been admirable, but perhaps one criticism has been that he has tended to come up just short when at the top of the mountain, metaphorically speaking. Earlier in his career when momentum was building, having beaten Josh Grispi and Max Holloway, he lost to Chan Sung Jung. Then after rebuilding himself at lightweight, winning four fights in a row, he was knocked out in under two minutes by underdog Michael Johnson. In the past few years though, few can deny he has made huge progress.

He has once again climbed the mountain, beating Max Holloway (again), Eddie Alvarez and Justin Gaethje to become interim champion, which set up a bout against possibly the greatest of all time, Khabib Nurmagomedov. He lost that one in round three but his career to date, and his follow-up win against Dan Hooker means he knows he has what it takes to take down McGregor.

This isn’t a revenge situation. We won’t see the childish remarks, aggressive insults and baiting of one another that we saw in the build-up to the first fight. Instead, both fighters are now into their thirties and are fathers, which seems to have mellowed them. The key is that both fighters have earned the other’s respect, something that was clearly lacking in 2014, with McGregor even donating to Poirier’s charity ahead of the rematch. 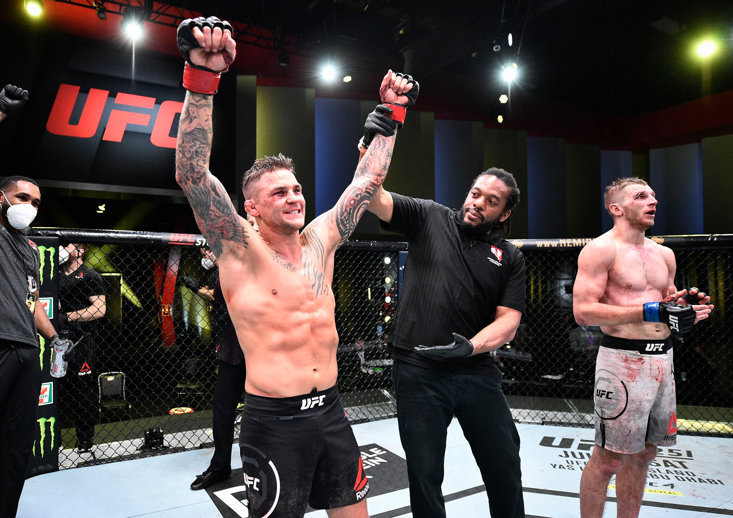 That charity, and Poirier’s work outside the ring is truly admirable. He auctioned off his kit after a no-contest with Alvarez to provide 3,000 meals for a food bank back in 2017 before changing things around his hometown of Louisiana. Along with his wife, Jolie, he launched ‘The Good Fight’ which provides care, assistance, and resources to those under-served in his local area. In fact, ahead of every fight, he announces a charity goal and became the inaugural winner of UFC’s Forrest Griffin Community Award due to his brilliant work away from the octagon.

His charity has also shown how generous the UFC community can be. Khabib donated £73,000 after their bout in 2019 while McGregor has announced he will donate £367,000 to the same foundation. This fight with McGregor will allow a boxing and MMA gym to be built in Lafayette, paving the way for a possible future star.

“Life is a fight, and we have to stay positive during the good and bad times," said Poirier. "The foundation will not lose sight of the goal, no matter what is happening.

"I fight for a lot of things, but nothing is more important to me than fighting for change and giving back. The generosity of Conor McGregor will help countless in need."

There is no animosity here, just two of the top lightweights in the world taking each other on. No matter who wins on Saturday night, thanks to Poirier, charity will come out on top.

x
Suggested Searches:
Tyson Fury
Manchester United
Marcus Rashford
Lewis Hamilton
F1
Air Jordan
More
mma
Gilbert Burns Is Back And Looking To End Kamaru Usman's Unbeaten...
The UFC’s efforts to ensure events remain watchable throughout the Covid-19 pandemic are set to [ ... ]
mma
The Diet Plan McGregor Is Using To Ensure He’s Fighting Fit...
Conor McGregor returns to the Octagon this weekend when he takes on Dustin Poirier for the second time [ ... ]
mma
At £330,000, Ronda Rousey Is The Highest Earning MMA Fighter...
It’s been a long time coming and the only person more prepared than the fans is the man himself [ ... ]
mma
Michael Bisping’s Believe You Me Is The Perfect Pod To Satisfy...
With nearly 300 episodes to currently demolish, this is the podcast to satisfy your MMA munchies.  [ ... ]
mma
The UFC Needs Paige VanZant's Instagram Followers More Than...
It was over almost before it began. Eighteen months of waiting culminated in a dominant Amanda Ribas [ ... ]
mma
Sanitised Violence: When Cage Warriors Went Behind Closed Doors
Just before UK lockdown began, top European MMA promotion Cage Warriors took place in a hauntingly deserted [ ... ]
mma
''Best Shape I've Ever Seen Him'' - Conor McGregor Bringing...
The wait is almost over as Conor McGregor makes the final preparations for his return to the Octagon [ ... ]
mma
From The Greatest To The Fiercest, UFC 245 Promises A Night...
Let’s take stock for a second. 2019 has delivered some blistering moments. Who can forget Jorge [ ... ]
mma
Hungry And Focused, It's The New Improved Conor McGregor
Conor McGregor’s striking coach, Owen Roddy, insists his fighter “has that hunger again” [ ... ]
mma
''Focused'' Conor McGregor Announces His Octagon Return In 2020
Conor McGregor has come out of MMA retirement and announced his return to UFC at the start of next year. [ ... ]
mma
From Flanker To Fighter: James Haskell Talks To TheSportsman...
Former England rugby star James Haskell announced last week that he'll be swapping his scrum cap [ ... ]
mma
His Three Most Notorious Moments Inside The Octagon As Conor...
The former UFC featherweight and lightweight champion Conor McGregor has announced his retirement [ ... ]
mma
Tenshin Nasukawa Unleashes Amazing Capoeira Kick To Bounce Back...
The defeat to Floyd Mayweather in a farcical exhibition big-money boxing match on the last New [ ... ]
mma
#Bellator216: Michael Page Outpoints Paul Daley In Disappointing...
Michael ‘Venom’ Page outpointed long standing rival Paul Daley at the Mohegan Sun Arena [ ... ]
mma
#Bellator216: MVP And Daley Set For All-British Brawl In Connecticut
The biggest domestic UK MMA fight of all time goes down this Saturday evening… in Connecticut, [ ... ]
mma
Aaron Chalmers Suffers Shock Defeat In Hometown Bellator Newcastle
Bellator kicked off their European Series in Newcastle with a bang, with an incredible twelve finishes [ ... ]
mma
Aaron Chalmers Aims To Please As Bellator Heads To Newcastle
Aaron Chalmers bids to move to a perfect 5-0 record as a mixed martial artist in his hometown, as he [ ... ]
mma
Conor McGregor 'Clone' - German MMA Fighter Emulates His Hero...
If you are going to model yourself on UFC Legend Conor McGregor then you better be able to deliver the [ ... ]
mma
Conor Mcgregor And Khabib Nurmagomedov Slapped With Hefty Bans...
Conor Mcgregor And Khabib Nurmagomedov have both been banned for their parts in the mass brawl that [ ... ]
mma
Tenshin Nasukawa Responds To Conor McGregor Calling Him Out
The Japanese martial artist Tenshin Nasukawa has seemingly not allowed his confidence to be knocked [ ... ]
mma
Celtic Gladiator 22: Brendan Loughnane And Kane Mousah Headline...
European mixed martial arts show Celtic Gladiator return to Manchester on Friday night for the second [ ... ]
mma
Horrendous Scenes As MMA Fighter Dislocates His Knee Whilst...
Not what you want to see on a Sunday morning but here we go anyway. As we know, MMA is probably the [ ... ]
mma
Yair Rodriguez Stuns Chan Sung Jung With Last Second Knockout...
Yair Rodriguez produced a sickening elbow to the face of Chan Sung Jung in the last second of their [ ... ]
mma
Conor McGregor Inspires Dallas Cowboys To Victory And Claims...
Conor McGregor bounced back from his defeat to Khabib Nurmagomedov by watching the Dallas Cowboys beat [ ... ]
mma
Conor McGregor's Top 5 Knockouts
The return of Conor McGregor to the octagon after an extended… sabbatical will redraw the collective [ ... ]
mma
Korean Taekwondo Team Dazzle Audience With Action Packed Display
It’s over ladies and gentleman. If you’re thinking about taking up Taekwondo, or looking [ ... ]
mma
Ultimate Fighter 27 Finale Is Perfect Prelude To UFC 226!
The Ultimate Fighter Season 27 draws to a close as the perfect warm-up act for the hotly anticipated [ ... ]
mma
Aaron Chalmers' First Bellator Bout Sees The Ex-Geordie Shore...
On Friday night, MMA fighter Aaron Chalmers sensationally won his bout with Ash Griffiths by technical [ ... ]
mma
UFC Atlantic City: Kevin Lee Misses Weight, Main Event Still...
The octagon returns to Atlantic City, New Jersey for the first time in nearly four years with the promotion [ ... ]
mma
Jacare Meets Brunson In Main Event At UFC Charlotte
The octagon returns to Charlotte, North Carolina after almost an eight-year hiatus with a twelve-bout [ ... ]