You have seen your favourite YouTubers knock out basketball players. You have seen MMA fighters destroy pensionable boxing legends. You have seen a former two-weight world champion box against a billionaire he met on holiday. Now all your fistic dreams will come true as Amir Khan presents ‘Crypto Fight Night’, a night of high-quality boxing where all your favourite cryptocurrency traders will fight against each other.

Wait, you don’t have a favourite cryptocurrency trader? Not a fan of Raghav ‘Reggie’ Jerath? Surely you have got a Barney The Boi poster on your wall? Can I interest you in Ahmed? That’s his name, just Ahmed. Like Madonna. You would be forgiven for wondering what the hell is going on, but basically some people who have built a following for their financial acumen in the growing world of cryptocurrency and NFTs will be taking part in a boxing event in Dubai on 16th October.

The WBC have even commissioned a special WBC Crypto Belt for the event, because of course they have. This prestigious championship will be the prize for the eagerly-awaited main event between RookieXBT and Loomdart. Yes, everyone in crypto has a name that sounds like your first email address from school. 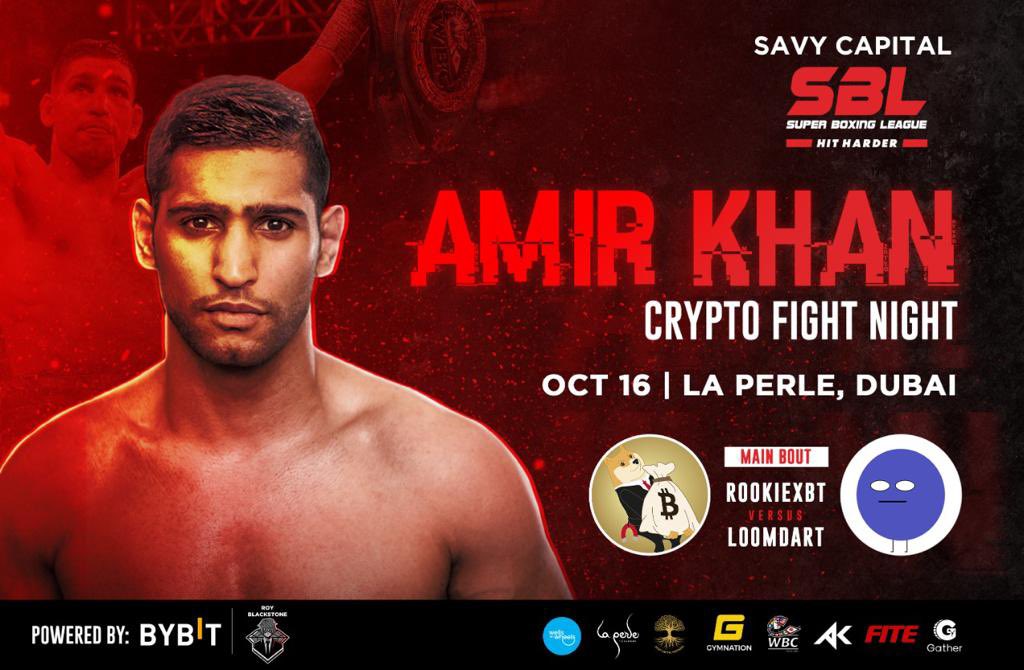 Amir Khan, perhaps as penance for not sharing those strawberries with his ‘I’m A Celebrity..’ campmates, is fronting this co-promotion with the Super Boxing League. The company previously hosted India’s first professional boxing league back in 2017, but appears to be trying to re-position itself as a Triller alternative in the “what if we do boxing without the boxers?” era of this grand old sport.

There are at least some proper fights on the undercard, as Dubai’s own Mohammad ‘Not That One’ Ali Bayat Farid vies for the WBC Asia heavyweight gong against New Zealand power-puncher Hemi Ahio. There will also be pro-debuts for Amir’s cousin Abdul Khan, England’s National ABA Youth Champion, and Tal Singh, the English amateur champion managed by ‘King Khan’.

For genuine boxing die-hards, there is little here to get excited about. For followers of these crypto-influencers there is perhaps intrigue to be had in seeing them knock each other out, then purchasing an NFT of the decisive blow afterwards. But more discerning fans of the fight game can at least take solace that these are healthy, young men competing against people with a similar level of experience.

The gruesome Evander Holyfield affair on Saturday should serve as a warning that those far past their physical and athletic prime should be protected from the boxing ring. Equally, this at least does not carry the odious stench of a Floyd Mayweather vs Logan Paul situation. That ‘fight’ was a glorified spar with the air of choreography hanging inescapably in the air, as Paul escaped with just enough success to keep interest high for his next outing.

If you choose to watch ‘Crypto Fight Night’, you know exactly what you are getting into. You will witness some giants of the world of cryptocurrency attempt to work out the difference between a block and the blockchain, plus some boxing matches featuring legitimate prospects on the undercard. As bizarre as this event sounds, let’s hope boxing can get through it without making an exhibition of itself.

x
Suggested Searches:
Manchester United
Liverpool
Manchester City
Marcus Rashford
Premier League
More
boxing
Dillian Whyte To Fight Otto Wallin, Five Boxing Stories You...
Dillian Whyte could face a tough heavyweight test in October, Jake Paul is helping to make a women’s [ ... ]
boxing
Bridge Over The River Why?: WBC Confirms First Bridgerweight...
Boxing has a new world championship in a brand new weight class, as Oscar Rivas and Bryant Jennings [ ... ]
boxing
Crawford vs Porter: Top Welter Scrap Can Cure Boxing Of Its...
WBO welterweight champion Terence Crawford will meet former two-time belt-holder Shawn Porter on 20th [ ... ]
boxing
Atrocity Exhibition: Boxing Must Stop Encouraging Fighters Like...
Evander Holyfield is no stranger to unedifying ends to a career. ‘The Real Deal’ has reached [ ... ]
boxing
Tyson Fury Shares Career Bucket List, Five Boxing Stories You...
Tyson Fury has mapped out his ideal boxing bucket list, Donald Trump is back and Billy Joe Saunders [ ... ]
boxing
Anthony Joshua's Ferocious Punching Power The Key Against Usyk,...
There’s a little over a fortnight to go until the showdown between WBA, IBF, WBO, and IBO heavyweight [ ... ]
boxing
First Line Of Defence: When The Best Brits Put Their Belts On...
Sunny Edwards was set to defend his IBF Flyweight championship against Jayson Mama on Saturday at the [ ... ]
boxing
When They Were Kings: Triller’s Old Guard Have Seen Better Days
Propped up by a mixture of celebrities, retired fighters, influencers and the odd rising boxer, Triller [ ... ]
boxing
When Wladimir Klitschko And ‘The Next Tyson’ Saved The Heavyweight...
Former WBC heavyweight champion ‘The Nigerian Nightmare’ Samuel Peter turns 41 today. Despite [ ... ]
boxing
Oscar Valdez Fighting After Positive Drugs Test Casts Boxing...
WBC super featherweight champion Oscar Valdez has tested positive for the banned substance phentermine [ ... ]
boxing
Lara Slice Puts Warrington Redemption On Ice
Josh Warrington stormed into Headingley to the strains of ‘I Predict A Riot’, but not even [ ... ]
boxing
Triumphant Taylor And Heroic Hughes Highlight Warrington vs...
There is no question that Josh Warrington drew the large and vocal crowd to Headingley, to watch him [ ... ]
boxing
Influencers Need Not Apply: Fury, Joshua and Canelo Lead Boxing’s...
Last weekend, Jake Paul “treated” us to the latest chapter in his boxing odyssey. Next Saturday, [ ... ]
boxing
Josh Warrington Admits Pressure Is On As He Seeks Revenge Against...
Josh Warrington is gearing up for a shot at revenge on Saturday night when he takes on Mauricio Lara [ ... ]
boxing
Undisputed vs Undisputed: A Future Fight Between Serrano And...
Among the YouTubers and gross mismatches on show in Cleveland, Ohio on the Jake Paul vs Tyron Woodley [ ... ]
boxing
A Night At The Circus: Paul Squeaks Past Woodley As Tommy Fury...
Jake Paul moved to 4-0 (3 KOs) last night with a split decision victory over former UFC champion Tyron [ ... ]
boxing
Angelo Dundee: Three Masterpieces From Boxing’s Greatest Trainer
Perhaps the greatest cornerman of all-time, Angelo Dundee guided the careers of sixteen world champions [ ... ]
boxing
Okolie Makes First WBO Defence On Stacked AJ/Usyk Undercard
Lawrence Okolie makes the first defence of his WBO World Cruiserweight Championship as part of a strong [ ... ]
boxing
Pacquiao Eyeing Up Ugas Rematch, Five Boxing Stories You Might...
It might not be the end of Manny Pacquiao’s legendary career just yet, YouTuber Jake Paul is comparing [ ... ]
boxing
Jake Paul vs Tyron Woodley Headlines Intriguing Card That Could...
The circus rolls on as internet personality Jake Paul treats us to his latest professional boxing extravaganza, [ ... ]
boxing
Spence, Crawford Or Porter? What Next For Pacquiao Conquerer...
On just 11 days’ notice, Yordenis Ugas pulled off one of the upsets of the year after beating [ ... ]
boxing
Age Is Just A Number: The Best Boxing Performances By Fighters...
Manny Pacquiao steps into the ring on Saturday (August 21) at the age of 42, hoping to win his unprecedented [ ... ]
boxing
Who Is Yordenis Ugas? The Cuban Olympian Fighting Pacquiao On...
WBA ‘Super’ World Welterweight Champion Yordenis Ugas meets the iconic Manny Pacquiao on [ ... ]
boxing
Pacquiao Wants Mayweather Rematch, Five Boxing Stories You Might...
Manny Pacquiao still wants a chance to avenge his loss to Floyd Mayweather Jr, Kell Brook and Amir Khan [ ... ]
boxing
On This Day In 1995: Mike Tyson Blitzes Peter McNeeley In Just...
Mike Tyson rocks back and forth, chewing his mouthpiece. The Catskills heavyweight always carried the [ ... ]
boxing
Muhammad Ali's Grandson, Nico Ali Walsh, Lands First-Round KO...
Nico Ali Walsh, middleweight boxing prodigy and heir to the great Muhammad Ali, won his first professional [ ... ]
boxing
From Manny Pacquiao To Marvellous Marvin Hagler, Five Of Boxing's...
It’s Friday 13, August and that means it’s International Left Handers Day! In boxing, left [ ... ]
boxing
Who Is Joe Fournier? The Businessman Who Trained Jay-Z And Is...
David Haye has become the latest retired boxer to see dollar signs at the prospect of a comeback, as [ ... ]
boxing
David Haye To Make Ring Return Aged 40, Five Boxing Stories...
David Haye is making a comeback after just three years away, one of the biggest fights of the year has [ ... ]
boxing
The Pressure’s On Smith Ahead Of Battle Of Liverpool With Fowler,...
Eddie Hearn says the huge October 9 card at the M&S Bank Arena in Liverpool, live worldwide on DAZN, [ ... ]