The name Wimbledon will always conjure-up images of strawberries and cream, champagne, Henman Hill, rain and of course Cliff Richard; but there is one key association which often goes unnoticed yet forms one of the longest running partnerships in sporting history - and that’s balls.

Sports manufacturer Slazenger was founded in 1881 by brothers Ralph and Albert Slazenger before Ralph left his native Manchester to open a shop on London's Cannon Street selling rubber sporting goods.

By 1902, Slazenger were appointed as the official tennis ball supplier to The Championships at Wimbledon, and it remains one of the longest, unbroken, sporting sponsorships in history which is still going strong almost 120 years later in a double act that the Murray brothers would be proud of.

Things have come a long way since those early days of the world’s most loved tennis tournament when the balls were made of solid rubber, with a wool cloth coating, making them heavy and susceptible to absorbing moisture, something which isn’t great in London’s often inclement climate.

In the beginning, each ball was hand sewn but by 1929 Slazenger had adopted a vulcanizing process which meant the cloth was glued onto the ball core rather than being fastened by needle and thread in the first of many technological advancements over the next century or so.

In 1937 they even worked out that the optimum temperature of a Slazenger tennis ball was around 68 degrees Fahrenheit with the All England Club soon introducing a courtside fridge to maintain a constant temperature for their most valuable assets whatever the weather.

In 1939, Slazenger patented a new ‘K’ cloth system which it claimed would ensure the ball became more durable and rigid as the game became more physical, meaning it lasted longer and its performance remained consistent throughout long and gruelling encounters.

But never wanting to rest on their laurels the manufacturer continued to develop their ball that is now a staple of the two-week tennis spectacular in South West London which is a firm fixture on the British sporting calendar.

As the big hitters got bigger and the ball took greater punishment in 1954 Slazenger introduced a new, state-of-the-art nylon armour covering while also introducing a brighter shade to its traditionally dull outer covering, meaning it didn’t just last longer but was easier on the eye for both players and spectators.

Such was the improvement that in 1982 a fluorescent yellow ball was introduced to aid visibility and replaced the green tinged colour which had been used previously; while by the end of the 1980s a bright yellow ball became the norm and in 1997 a water-repellent barrier called Hydroguard was adopted.

Of course, it’s not just sporting events which are partial to lengthy endorsements, plenty of players down the years have agreed extremely lucrative deals to tie them in with manufacturers and equipment suppliers eager to have them associated with their brand.

In 1922, pro golfer Gene Sarazen became the first member of the Wilson Advisory Staff and his contract with Wilson Sporting Goods lasted for 75 years – one of the longest running endorsement deals in the history of sports.

Sarazen is still seen as something of a pioneer when it comes to endorsement deals, paving the way for current long-term athlete endorsers like David Beckham, who put pen to paper on a lifetime agreement with Adidas and Tiger Woods, who signed with Nike when he turned pro in 1996,

But as sport has evolved in the multimedia age and become more about the individual than the game as a whole, when it comes to major events on the sporting calendar there are few more iconic sporting partnerships on the planet than Slazenger and Wimbledon. 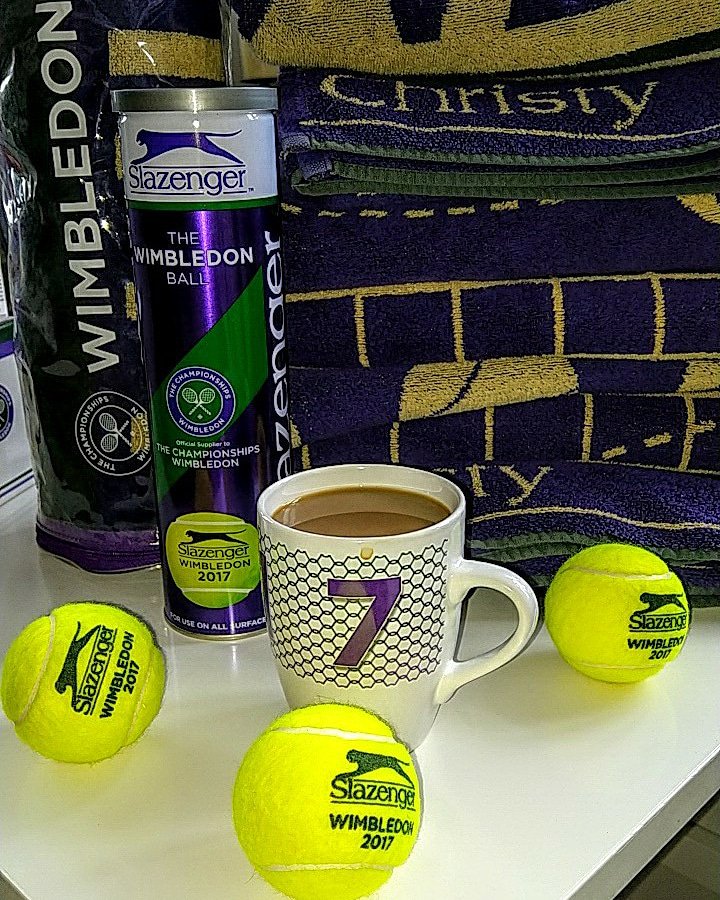 0
1
x
Suggested Searches:
Tyson Fury
Manchester United
Marcus Rashford
Lewis Hamilton
F1
Air Jordan
More
tennis
Novak Djokovic Is Destined To Become Tennis' Greatest Ever Male...
In an era in which Roger Federer has taken the level of competition to new heights and Rafael Nadal [ ... ]
tennis
Naomi Osaka Wins Second Australian Open With Clincal Display...
Naomi Osaka has won her second Australian Open title and remains unbeaten in major finals after beating [ ... ]
tennis
Osaka And Djokovic Both Looking For History In Australian Open...
So the Australian Open final line-ups have been decided. Daniil Medvedev’s outstanding straight-sets [ ... ]
tennis
Did A Tearful Serena Williams Bid Her Final Farewell To The...
Serena Williams waved as the adulation of the Australian Open crowd came from all four corners of the [ ... ]
tennis
Serena, Djokovic And A Rank Outsider Take Top Billing In The...
We knew this Australian Open would be different, but even so, a semi-final line-up without Rafael Nadal [ ... ]
tennis
Aslan Karatsev Is The 2000/1 Shot Taking The Australian Open...
You probably hadn’t heard of the name Aslan Karatsev two weeks ago, yet now the Russian will face [ ... ]
tennis
Cautious Novak Djokovic Battling For Record Grand Slam After...
Novak Djokovic showed his battling qualities once more on Sunday and remains on course for a ninth Australian [ ... ]
tennis
Nick Kyrgios Grabs The Headlines Again On His Way To The Last...
Love him or hate him, Nick Krygios is box office stuff. So rarely out of the headlines, the Australian [ ... ]
tennis
Is A Fond Wimbledon Farewell The Best Andy Murray Can Hope For...
Along with Roger Federer, Sir Andy Murray is one of the major absentees from perhaps the strangest Australian [ ... ]
tennis
Australian Open Chaos Should Serve As A Warning For Euro 2020...
The build-up to the Australian Open has simply been like nothing we have ever seen or experienced before. [ ... ]
tennis
Netflix Doc 'Settling The Score' Shines Light On One Of Sport's...
Sporting injustices have tarnished the game throughout history, but the injustices that go under the [ ... ]
tennis
Long Live The King Of Clay! Nadal's Fifteen Year Love Affair...
A million seconds is eleven and a half days, yet a billion seconds is 31 years and seven months.  [ ... ]
tennis
Djokovic's Disqualification Disaster And Other Tennis Stars...
The look of horror hit Novak Djokovic almost as quickly as the tennis ball that rifled into the throat [ ... ]
tennis
Arthur Ashe, The History-Making Trailblazer Who Transcended...
Arthur Ashe is the only black man to win the singles title at each of Wimbledon, the US Open, and the [ ... ]
tennis
40 Years On From Borg, McEnroe And The Greatest Wimbledon Match...
In a match that is widely regarded as arguably the greatest-ever to be played at Wimbledon, Bjorn Borg [ ... ]
tennis
The Tennis Podcast Is All You Need To Get Through The Wimbledon...
Having planned, once again, to broadcast everyday through this year’s Grand Slam tournaments, [ ... ]
tennis
Andy Murray Can Still Compete But Has Nothing Left To Prove,...
Andy Murray knows a thing or two about creating history. The man who became Great Britain’s [ ... ]
tennis
Andy Murray Looking At Miami Open Return After Extended Injury...
Andy Murray is targeting a return to the court at the Miami Open later this month ending his extended [ ... ]
tennis
Maria Sharapova Deserves Respect For Taking Female Earnings...
Maria Sharapova has called time on her glistening career having won every single Grand Slam event and [ ... ]
tennis
Why The Next Month Is Vital For Andy Murray And His Wimbledon...
Sir Andy Murray’s hopes of competing at Wimbledon this year and defending his Olympic title in [ ... ]
tennis
An Open Victory Would Be Huge For Ash Barty, But Even Bigger...
Ashleigh Barty has reached the semi-finals of the Australian Open for the first time in her career following [ ... ]
tennis
Performance Over Outcome: Why Federer Is Still A Beast On The...
The superlative-defying Swiss is at it again. Roger Federer has muscled his way into the Australian [ ... ]
tennis
Mr Shakira And The Multi-Billion Pound Revamp Of The Davis Cup
Premier international tennis tournament the Davis Cup, fast approaching the 120th anniversary of its [ ... ]
tennis
The Young German Ready To Shatter Djok, Federer & Nadal's Ironclad...
Rafael Nadal’s hopes of finishing the season as world number one took a serious blow with a straight-sets [ ... ]
tennis
Here's Why Murray, Djokovic And Tennis's Stars Have Been Confusing...
Andy Murray, Novak Djokovic and the rest of the tennis world have been confusing reporters and fans [ ... ]
tennis
Serena Williams And The Numbers That Have Taken Her To The Verge...
With a straight sets victory over Elina Svitolina, Serena Williams once again stoked fans’ hopes [ ... ]
tennis
Daniil Medvedev: The Moscow Menace Infuriating At The US Open
“Every search for a hero must begin with something every hero needs: a villain.” That quote [ ... ]
tennis
Coco Gauff, Naomi Osaka And Taylor Townsend: Next Generation...
Taylor Towsend stole the headlines at the US Open as the 23-year-old rank outsider knocked out fourth [ ... ]
tennis
Serena Williams v Maria Sharapova: The Rivalry That Tennis Has...
Yesterday’s build-up to the US Open was full of the cliched lines we have heard on repeat for [ ... ]
tennis
Deaf Tennis Player Lee Duck-hee Etches His Name Into The History...
Tennis star Lee Duck-hee cemented his name in the history books at the Winston-Salem Open by becoming [ ... ]