Team USA stretched their lead to 11-5 on day two of the Ryder Cup at Whistling Straits after another long and painful day for Europe that left them with a monumental challenge going into the final day.

Team Europe lost 3-1 in the morning foursomes but had the first point of the day on the board thanks to super Spaniards Jon Rahm and Sergio Garcia, having come back from three behind to beat Brooks Koepka and Daniel Berger. His 24th victory in the Ryder Cup, Garcia has now won the most matches in the tournament’s history.

After that terrific fight back the pair embraced on the green but the celebrations wouldn’t last long. Dustin Johnson and Colin Morikawa beat Englishmen Paul Casey and Tyrell Hatton 2&1. For the first time since the world rankings began in 1986, the top-ranked American player, in this case Johnson, had won a match in each of the first three sessions at the Ryder Cup.

Justin Thomas and Jordan Spieth then remarkably came from three holes down to defeat the rookie pair of Viktor Hovland and Bernd Wiesberger 2UP. 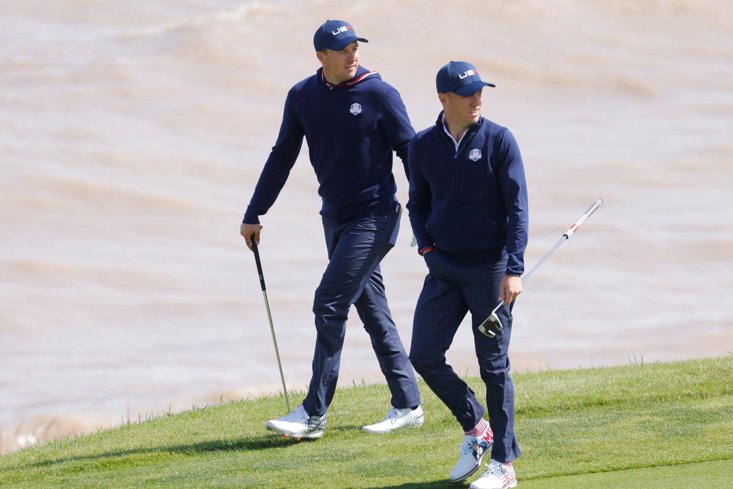 Speaking after the comeback, Thomas said, “It was huge. I'm proud of everybody on the team. I felt like early we definitely had the opportunity for how our matches got started out and how Jordan and I started out, and then the first match they came back, and they were coming back on the second match, and then we were obviously down.

“So they had a really good opportunity to kind of flip it a little on us, and man, I'm glad that all these guys on our team this week are on my team. They are great players and competitors and fighters.”

The Americans landed the final point of the foursomes in the last match when Lee Westwood and Matt Fitzpatrick were beaten by Xander Schauffele and Patrick Cantlay 2&1. After a morning of US dominance, with the home nation leading 9-3 heading into the afternoon fourballs, it was the biggest lead after three sessions since 1975 - and that was against Great Britain and Ireland as Europe didn't join the event until 1979.

Europe made sure they went into Sunday with at least a glimmer of hope of retaining their crown on Sunday with a slightly better showing in the fourball. 2019 Open Champion Shane Lowry put in a sensational performance sinking a nerveless par putt to clinch a full point for Europe over Harris English and Tony Finau alongside Tyrell Hatton. Almost immediately after, more joy came from world number one Rahm and Garcia, who beat Koepka and Spieth 2&1, making three wins from three for the duo. 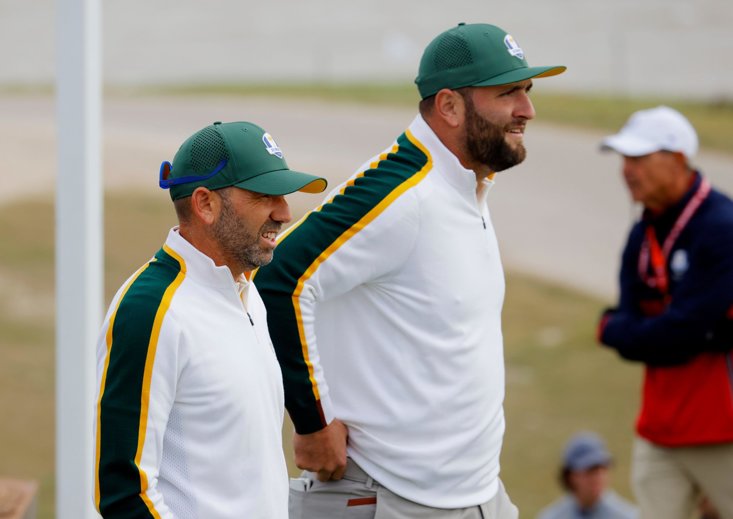 Speaking after the win, Lowry said, "I've always wanted to play in a Ryder Cup and we are a few points behind but I am not stopping believing. I am having the week of my life, it is an incredible experience.

"I really hope we can give them loads tomorrow and put up a good performance. You just never know, all morning I was thinking of Medinah and there is just such a good bond in our team.”

However, it wasn’t all Team Europe’s way as a poor week for Ian Poulter and Rory McIlroy continued, with the duo handily beaten 4&3 by Johnson, who has won all four of his matches this week, and Morikawa. The fourballs session finished at two wins apiece, leaving USA with a 11-5 lead going into Sunday’s single, after Scottie Scheffler and Bryson Dechambeau overcame Tommy Fleetwod and Hovland 3&1.

Europe have a huge mountain to climb tomorrow. Miracle at Whistling Straits, anyone?

x
Suggested Searches:
The Sportsman
Manchester United
Liverpool
Manchester City
Premier League
More
golf
The DP World Tour Bans LIV Golf Players From The Scottish Open
The DP World Tour has handed out £100,000 fines to all the players who competed in June’s [ ... ]
golf
R&A Confirms LIV Golf Series Stars Will Be Invited To The Open...
The Royal & Ancient Golf Club has confirmed that players signed up to the LIV Golf Series will be [ ... ]
golf
US Open Preview: European Stars Can Dominate The Top Ten
After weeks of folie à deux in the world of golf, the world’s finest players return to [ ... ]
golf
Rory McIlroy And Linn Grant Weekend Wins Overshadow LIV Golf...
The inaugural LIV Golf event at London’s Centurion Club was left in the dust on Sunday thanks [ ... ]
golf
The Troublesome Timeline Of LIV Golf: How Did We Get Here?
The most controversial topic in sport right now, the LIV Golf tournament, teed off on Thursday after [ ... ]
golf
Dustin Johnson's Defection Could Change Not Just Golf But Sport...
To call Dustin Johnson’s withdrawal from the PGA Tour on Tuesday “seismic” would be [ ... ]
golf
Everything You Need To Know About The 2022 PGA Championship
‘This is Major’ is the PGA’s chosen slogan for their flagship major event, as the [ ... ]
golf
Betfred Donate £19,000 To Prostate Cancer UK After Danny Willett...
Thorbjørn Olesen may have walked away with the Betfred British Masters title over the weekend, [ ... ]
golf
Betfred British Masters: Thorbjorn Olesen Triumphs With Spectacular...
Thorbjorn Olesen clinched the Betfred British Masters title with an incredible 35-foot putt on the 18th [ ... ]
golf
Thorbjorn Olesen Three Clear Heading Into Final Day Of Betfred...
Following a miserably wet Friday, the sunshine returned to The Belfry on Saturday as round three of [ ... ]
golf
Hurly Long And Danny Willett Shine On Day Two At Betfred British...
It was another action-packed day at The Belfry in Sutton Coldfield for day two of the Betfred British [ ... ]
golf
Great Danes Enjoy Profitable Opening Day At Betfred British...
If watching Christian Eriksen run the show in the Premier League wasn’t enough, now several other [ ... ]
golf
Everything You Need To Know About The Betfred British Masters
The British Masters is upon us and Danny Willett has chosen The Belfry again as the host for one of [ ... ]
golf
Phil Mickelson Plays Both Sides As Golf’s Civil War Begins
Phil Mickelson, American golf hero and people’s champion left many fans flabbergasted by [ ... ]
golf
Lazarus With A Five Iron: Tiger Roars Back At The Masters On...
On April 14 2019, the weather was looming ominously in Augusta, Georgia. The only thunder that ultimately [ ... ]
golf
Scheffler Shines, Rory Reborn & Tiger Returns: 5 Things We Learned...
Scottie Scheffler's stunning season continued this weekend as he clinched the first major of his [ ... ]
golf
Tiger’s Greatest Triumphs: Three Times Woods Defied All The...
You simply couldn’t write the life of Tiger Woods. A man that has seen it all, won the lot and [ ... ]
golf
The Masters Best Picks And Tips: Can Tiger Woods Live The Dream...
Tiger Roll might’ve called it a day after Cheltenham, and Subway might’ve called time on [ ... ]
golf
25 Years On: Remembering When Tiger Woods Became The Masters’...
Way before his slams, his swings and scandals, Tiger Woods paved the way as a phenom in the world of [ ... ]
golf
Everything You Need To Know About The 2022 Masters Tournament
The famous green jacket is up for grabs once again as the golf world descends on Augusta, Georgia for [ ... ]
golf
Where? When? How To Watch? Everything You Need To Know About...
One of the highlights of the golfing calendar arrives next week in the form of the sport’s “fifth [ ... ]
golf
Five Of The Best UK Golf Courses You Can Play For Under £100
The majority of UK golf courses we see the likes of Bryson DeChambeau, Rory McIlroy and Jon [ ... ]
golf
IN PICTURES: Five Of The Most Beautiful Golf Courses In The...
Widely regarded as one of the best looking golf courses man has ever crafted, Pebble Beach in California [ ... ]
golf
Drama Surrounding Saudi Super Golf League Could Rumble On For...
Although this feels like an idea which has just been ignited, the concept of a breakaway league in golf [ ... ]
golf
Why The DP World Tour Will Help European Golf
As the PGA Tour came to a close before September’s Ryder Cup, the European Tour has entered its [ ... ]
golf
USA Complete Ryder Cup Annihilation As Cantlay And Scheffler...
The USA regained the Ryder Cup on Sunday, finishing off a convincing exhibition of matchplay golf by [ ... ]
golf
Ryder Cup Pairings 2021 Day One: Rahm And Garcia Eye Up Titanic...
The Ryder Cup pairings have delivered once again. Europe will start by sending out world number one [ ... ]
golf
Everything You Need To Know About The 2021 Ryder Cup At Whistling...
The 2021 edition of the Ryder Cup begins on Friday a whole year after its initially scheduled start [ ... ]
golf
Will Shane Lowry Make It? Europe's Ryder Cup Qualifying Race...
The Ryder Cup kicks off later this month at Whistling Straits and Europe’s men will be hoping [ ... ]
golf
Kids In America: Rookie Duo Maguire And Castren Fire Europe...
The old cliche that youth has no fear is often thrown about in sport, but we saw just how nerveless [ ... ]