Sports
News
With Tokyo 2020 just days away, we have looked at the ten biggest shocks in the history of the Games
Simon Lillicrap
13:14, 19 Jul 2021

Tokyo 2020 is now just a matter of days away and as we gear up to watch the greatest athletes on the planet strut their stuff, it is worth remembering that things won't always go as planned. Even the most-fancied, best athletes can be beaten on any given day, so we’ve taken a journey back through time to look at the top ten shocks at the summer Olympics.

Wrestler Rulon Gardner was a relative unknown heading into Sydney, as he prepared to make his Olympic debut. He would leave as a gold medalist against all the odds. Facing legend of the sport Alexander Karelin in the final, who had won the last three Olympic gold medals along with nine world titles, he was not given a hope of victory, but gained an early point and held off the Russian giant for a historic win.

USA seemed to be at the heart of a lot of these shocks and had won gold in ‘92, ‘96 and ‘00 - but by the time ‘04 came around, other nations were ready to strike. A star-studded team featuring the likes of Lebron James came up against Puerto Rico in their opening game and were surprisingly beaten 92-73.

It would be a talented Argentina team who would knock the USA out of the competition, but this Puerto Rico defeat goes down as one of the biggest Olympic shocks ever.

USA’s women were the dominant force in the world and had won every single gold medal since the sport was introduced to the Games in 1996, and when Beijing came around they were expected to walk to another gold. They’d already beaten Japan in China comfortably, 7-0 and 4-1 on their way to the final, but when the two sides met in the final, it would be the underdogs who would come out on top.

Pitcher Yukiko Ueno had the game of her life as the Japanese recorded a shock 3-1 win to take home the gold. Nobody saw this coming, and with the sport returning for this year’s Games, we could be in line for more Japanese success.

World record holder Ron Clarke was the heavy favourite for this race but an unknown quantity entered a huge 29 man field for the final. Mills was a marine and had qualified for the Games during training, and managed to hold onto the leaders, Clarke and Tunisia's Mohammed Gammoudi.

Then, in the last 100m, he found something from somewhere and sprinted past his illustrious two rivals to take the most unlikely goal.

A state sponsored drugs programme saw the East Germans absolutely clean up in the pool at the 1976 Olympics as they won all but two races in the individual events. This was unprecedented for a nation with little history in the sport, and clearly something was up, but even so the USA pulled off a historic win in the 4x100m freestyle relay.

Against four obviously juiced up Germans, Kim Peyton, Jill Sterkel, Babashoff and Wendy Boglioli finished 0.68 seconds ahead of their rivals to take gold against all odds.

The 30-year-old British runner nicknamed ‘the flying housewife’ had given birth two years before the Games, had her prime taken away from her by World War II and was seen as many as over the hill by the time the London Olympics came around.

She competed in four events in London, including the relay, and no other medalist was over the age of 23 in an era where women athletes and particularly mothers, were not seen as equals. Instead of looking after her two children she blew the field away and won four gold medals.

One of Team GB’s greatest achievements was beating the USA to win gold in Athens. The US had beaten Britain by half a second in their heat and brought Justin Gatlin into their quartet for the final. There was surely only going to be one winner.

However, Jason Gardner, Darren Campbell, Marlon Devonish and Mark Lewis-Francis ran the race of their life to edge out the American team, which featured three of the top four in the 100m, but had struggled with one changeover by 0.01 seconds. Incredible.

Zatopek was one of the top athletes in the world when the 1952 Games came around so why is this a shock? Well, before the Olympics, he had never run more than 10k, his preferred event and only decided to take part in the marathon at the last minute. Four times the distance, this would be a big ask, especially up against world record holder Jim Peters.

The Czechoslovakian ran to victory by two minutes, as he set a blistering pace that forced Peters to retire in Helsinki. The best runner in the world at the time made the marathon look like child’s play.

One of the biggest shocks in Olympic history came in the blue riband event as Canadian sprinting sensation Ben Johnson seemingly broke the world record with a 9.79. He got an incredible start and powered his way to gold, but the events that unfolded hours after the race were shocking.

24 hours later, after the medal ceremony, he failed a drugs test and his gold medal was taken from him in the most dramatic of circumstances. The dirtiest race in history.

Michael Phelps is the greatest Olympian of all time. 23 gold medals and 28 in total, he was expected to win every single race he entered. He scooped eight golds from eight events in 2008, and was expected to clean up in 2012. 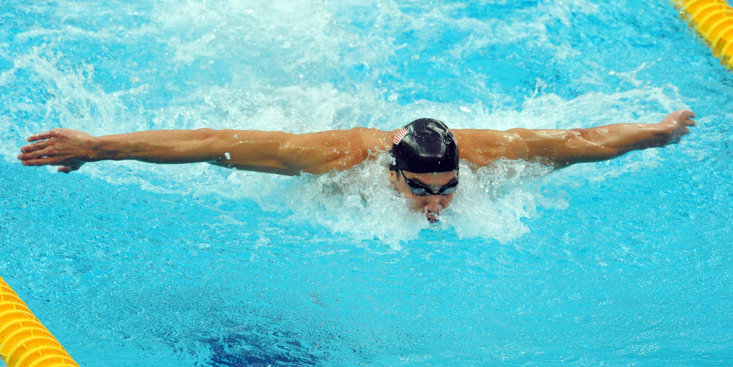 In the 200m butterfly, Phelps led at 150m, but did not count on a huge final 50m from the South African, who overhauled him to beat him to the wall and stop him winning the same event at three consecutive Olympics.

x
Suggested Searches:
Manchester United
Liverpool
Manchester City
Marcus Rashford
Premier League
More
sports
''My Ear Was Falling Down My Neck'': IMPACT's Josh Alexander...
When Josh Alexander steps into the ring with IMPACT World Champion Christian Cage tonight, first-time [ ... ]
sports
Tony Khan Books Danielson-Suzuki Dream Match Opposite SmackDown
AEW President Tony Khan announced a pro wrestling dream match last night, revealing that ‘American [ ... ]
sports
From Fury-Wilder III To The Turkish GP, The Sportsman’s 119/1...
The weekend is almost here and The Sportsman are putting together yet another accumulator. With [ ... ]
sports
From Anthony Joshua to Cristiano Ronaldo, The Sportsman’s 2187/1...
The weekend is fast approaching which can only mean one thing, The Sportsman’s weekly accumulator [ ... ]
sports
Prince, Tyson Fury, Jose Mourinho - Sport's Greatest Ever Press...
Nobody does press conferences like the world of sport. Whether it’s Premier League managers directing [ ... ]
sports
How Elite Athletes Like Ronaldo And LeBron Have Adapted Their...
Cristiano Ronaldo’s goal for Manchester United in their 2-1 loss to Young Boys last night showed [ ... ]
sports
Teenage Kicks: Raducanu Joins Elite Group Of Top British Sporting...
Emma Raducanu stunned the world with her incredible US Open final win in straight sets over Leylah Fernandez. [ ... ]
sports
Enter The Dragon: Bryan Danielson Shakes Off ‘Daniel Bryan’
Daniel Bryan is dead. Long live ‘American Dragon’ Bryan Danielson. Whatever you know him [ ... ]
sports
The Shape Of Punk To Come: AEW Return To Chicago For All Out
AEW returns to pay-per-view with All Out on Sunday night, broadcasting live from the Now Arena in Chicago, [ ... ]
sports
Rebuilding Ric Flair: How Vince McMahon And Triple H Saved 'The...
‘Nature Boy’ Ric Flair returned home on Sunday night, when he made his return to the National [ ... ]
sports
The Superhuman Superstars Inspiring A New Generation At The...
The Paralympics are well underway and some of the most inspirational humans the world has to offer are [ ... ]
sports
From Undisputed To A Little Bit Of The Bubbly, Chris Jericho's...
Wrestling legend Chris Jericho will put his career on the line when he faces MJF at AEW All Out on 5th [ ... ]
sports
From Fireworks In France To Disco Demolitions: The Ugliest Conclusions...
Last night we saw the match between OCG Nice and Marseille abandoned as a result of disgraceful behaviour [ ... ]
sports
Many Happy Returns - Becky Lynch And Brock Lesnar Shake SummerSlam
‘Comeback’ was the key word at WWE Summerslam on Saturday night as over 50,000 fans at Allegiant [ ... ]
sports
Sports vs Videogames: When Tyson, Zlatan and LeBron Raged Against...
After a drawn-out legal dispute, Manchester United will be renamed ‘Manchester UFC’ on the [ ... ]
sports
From Ruthless Aggression To Out-Rapping The Rock, John Cena’s...
John Cena takes to the ring on Saturday in his first pay-per-view main event for over three years, when [ ... ]
sports
CM Punk Prepares To Return - Will He Drop Another ‘Pipe Bomb’?
While nothing is 100% sure in the world of pro wrestling, all credible indicators point to the fact [ ... ]
sports
WWE SummerSlam Brings Cena, Edge And More To Nevada
SummerSlam has traditionally been WWE’s second-biggest event of the year, below only WrestleMania [ ... ]
sports
Farewell Tokyo, Hello Paris! How Will Team GB Look At The 2024...
So the curtain has come down on Tokyo 2020 and although this was the ‘extended version’ [ ... ]
sports
Kenny's Keirin, Brown's Bronze & The Sportsman's Highlights...
The Tokyo 2020 Olympic Games might be over but they have left The Sportsman’s team with plenty [ ... ]
sports
Another Astonishing Olympics For Team GB - But Is This The Peak?
We didn’t know if it would even take place, but the sun has set on a Tokyo Olympics that has thrilled [ ... ]
sports
Day 14 Olympics Round-Up: Kenny Becomes First Female Brit To...
We are in the final straight of the spectacle that is Tokyo 2020 and while this great Olympics is drawing [ ... ]
sports
Day Eleven Olympics Round-Up: Thompson-Herah Wins Double-Double...
An astonishing day of Olympic action unfolded in the Japanese capital as there were more golds for Team [ ... ]
sports
Mixed Events Are Here To Stay After Team GB's Tokyo Olympics...
Tokyo 2020 has seen the introduction of some new encapsulating mixed events that could be the future [ ... ]
sports
Italy Continue To Defy The Odds As Perfect Summer Continues...
There could be no such thing as the perfect summer of sport, but if there is, Italy are experiencing [ ... ]
sports
Day Ten Olympics Round-Up: GB Win Eventing Gold As Simone Biles...
Day 10 of Tokyo 2020 had plenty to offer as Team GB claimed another gold to add to their impressive [ ... ]
sports
Day Eight Olympics Round-Up: Relay Gold For Team GB Despite...
Team GB enjoyed more success on day eight of Tokyo 2020 as further history has been made in these historic [ ... ]
sports
From Dina To Daley, Here's What's In Store For Week Two At Tokyo...
The first week of Tokyo 2020 has been full of excitement and has produced some great entertainment. [ ... ]
sports
Day Five Olympics Round-Up: Mallory Franklin Takes Silver In...
Day six of Tokyo 2020 brought more excitement and Great Britain managed to pick up a few more medals [ ... ]
sports
From Raging Bull To Rudy, Ten Of The Greatest Sports Biopics...
This week saw the trailer drop for King Richard, a brand new biopic of Richard Williams, father [ ... ]