Sports
News
With Tokyo 2020 nearly fully underway, we take a look back at ten of our favourite moments from the Olympic Games
Conor Keane
08:55, 22 Jul 2021

The Olympic Games always provide incredible memories for athletes and watchers around the world and this year’s belated edition in Tokyo will likely be no different.

They provide some of sport’s greatest ever moments, so it's the perfect time to reflect on some of the best occasions the Games have provided to the world over the years. Here are ten of our favourites from the past Olympics.

At the 1992 Olympic Games, Great Britain’s 400m runner Redmond suffered a heart-breaking injury in the semi-finals as his hamstring snapped. The snap occurred around the 250m mark and crashed to the floor alongside his Olympic dream. 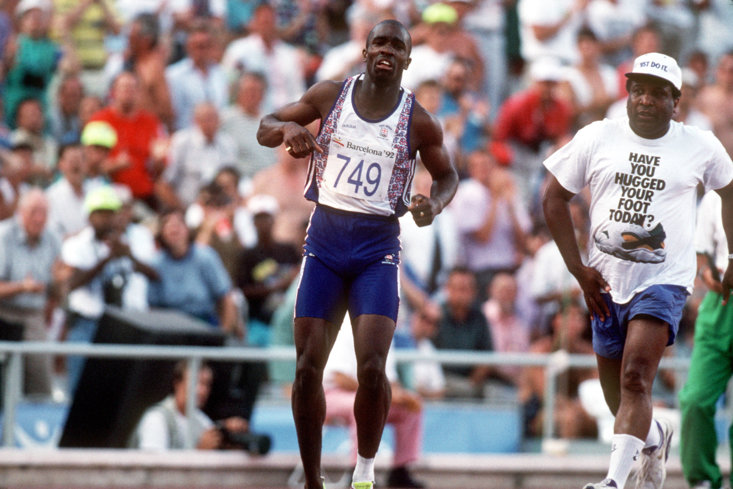 While he did not win a medal, his drive to finish the race has never been forgotten.

He got up to his feet in pain as he had promised his father that he would finish the race ‘no matter what’. Halfway to the finish line, crying in pain and desperation, Redmond’s father Jim came to his son’s aid to see him over the line. As the pair crossed the finish line the stadium spectators erupted in a standing ovation.

Michael Johnson dazzled at his home Olympics as he captured the gold medals in the 400m and the 200m. His 400m time of 43.49 seconds was an Olympic record time and he smashed the world record time for the 200m when he ran it in 19.32 seconds. He delivered for his nation on the biggest stage, becoming a homeland hero.

As the golden girl of the Australian Olympic team, Cathy Freeman was the athlete who lit the Olympic torch to begin the Games.

She was the favourite for 400m and she did not disappoint her fans and her nation. Having lost her main rival Marie-Jose Perec, who left the Games as a result of harassment, Freeman claimed the gold in a time of 49.11 seconds. As a result of her triumph she became only the second Australian Aboriginal Olympic champion.

This was the first time the US sent a team of active NBA players to compete at the Olympics. 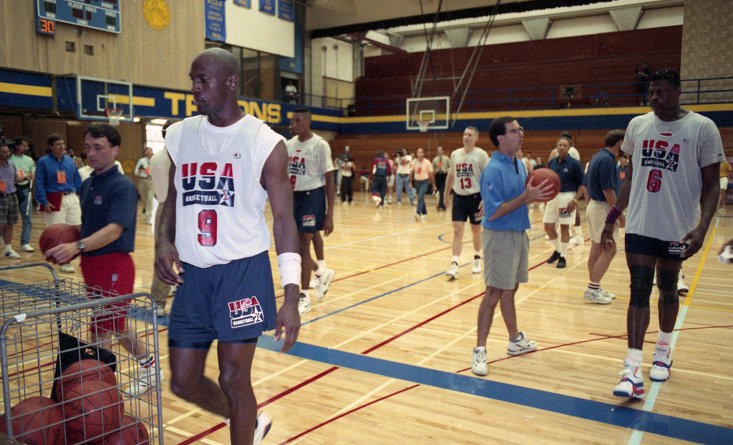 The team was headlined by all-time great Michael Jordan and he was joined by Larry Bird, Scottie Pippen, Karl Malone, Charles Barkley and Magic Johnson, to name a few. They headed into the Games as undeniable favourites and they secured the gold medal against Croatia with an average winning margin of 44 points across the eight games.

At the 2008 Olympics, Phelps made history which helped cement him as one of, if not the greatest Olympic athlete of all time. The swimmer won eight gold medals in Beijing, breaking the 1972 record set by compatriot Mark Spitz with his seven golds in Munich. It was the greatest single sporting accomplishment on the Olympic stage which made him a household name.

The young Romanian made her competitive Olympic bow in Montreal. Here she became the first Olympic gymnast to score a perfect 10 for her routine on the uneven bars. She went on to record six more perfect 10s before finishing the Games with three gold medals. An incredible achievement for someone so young.

Jesse Owens steals the spotlight from Adolf Hitler at Berlin 1936

While Germany was plunged into the darkness of the Third Reich, African American Jesse Owens completely shut down Hitler’s Aryan race philosophy as he claimed gold in the 100m, 200m, long jump and 4x100m relay.

One of the fondest memories for Brits in the wonderful home games as Brits were claiming gold medals throughout the historic day. Super Saturday is mostly remembered for the evening entertainment in the Olympic Stadium, but it all started at Eton Dorney early in the day. The men’s four (rowing) of Alex Gregory, Pete Reed, Tom James and Andrew Triggs Hodge won gold and then 10 minutes later women’s double sculls pair Katherine Copeland and Sophie Hosking did the same to kick off an historic day.

The Velodrome was the scene of huge success for Team GB at London 2012 – Super Saturday had its share. Dani King, Laura Trott and Joanna Rowsell broke the world record in their heat against Canada, then smashed it again in the final as they easily beat the United States in the women’s team pursuit. 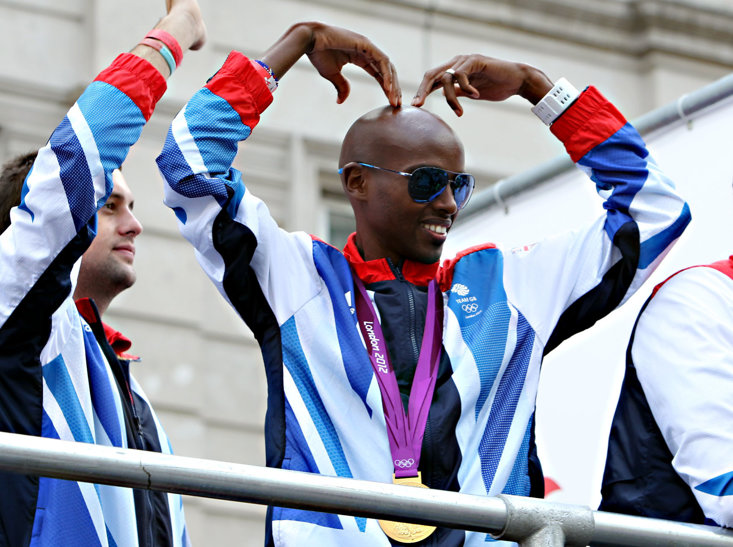 The evening entertainment sealed Britain’s best day at the Olympics for 104 years when Jessica Ennis-Hill won the heptathlon before Greg Rutherford and Mo Farah won the long jump and 10,000m respectively.

The Jamaican sprinter is now considered the most famous Olympian of all-time, but Bolt’s name first entered households during the Beijing Games with a show-stealing performance on the track. He became the first man to hold both the 100m and 200m records (since fully automatic time became mandatory) on his way to securing gold in both events.

Hoy stole the spotlight for Team GB in Beijing as the cyclist became the first British Olympian for 100 years to claim three gold medals during one Games. His three accolades came in the men’s keirin, the men’s team sprint and the men’s individual sprint.

x
Suggested Searches:
Manchester United
Liverpool
Manchester City
Marcus Rashford
Premier League
More
sports
Day Eleven Olympics Round-Up: Thompson-Herah Wins Double-Double...
An astonishing day of Olympic action unfolded in the Japanese capital as there were more golds for Team [ ... ]
sports
Mixed Events Are Here To Stay After Team GB's Tokyo Olympics...
Tokyo 2020 has seen the introduction of some new encapsulating mixed events that could be the future [ ... ]
sports
Italy Continue To Defy The Odds As Perfect Summer Continues...
There could be no such thing as the perfect summer of sport, but if there is, Italy are experiencing [ ... ]
sports
Day Ten Olympics Round-Up: GB Win Eventing Gold As Simone Biles...
Day 10 of Tokyo 2020 had plenty to offer as Team GB claimed another gold to add to their impressive [ ... ]
sports
Day Eight Olympics Round-Up: Relay Gold For Team GB Despite...
Team GB enjoyed more success on day eight of Tokyo 2020 as further history has been made in these historic [ ... ]
sports
From Dina To Daley, Here's What's In Store For Week Two At Tokyo...
The first week of Tokyo 2020 has been full of excitement and has produced some great entertainment. [ ... ]
sports
Day Five Olympics Round-Up: Mallory Franklin Takes Silver In...
Day six of Tokyo 2020 brought more excitement and Great Britain managed to pick up a few more medals [ ... ]
sports
From Raging Bull To Rudy, Ten Of The Greatest Sports Biopics...
This week saw the trailer drop for King Richard, a brand new biopic of Richard Williams, father [ ... ]
sports
Day Five Olympics Round-Up: GB Relay Team Storm To Gold & Dujardin...
Tokyo 2020 continues to thrill, with Great Britain collecting more medals on Wednesday and some high-profile [ ... ]
sports
Simone Biles Should Be Applauded For Her Withdrawal, Says Mental...
Simone Biles’ decision to withdraw from the all-around gymnastics final has been applauded by [ ... ]
sports
Day Four Olympics Round-Up: More Medals For Team GB In Best...
Great Britain has never had such a successful start to an Olympic Games. As day four comes to a close, [ ... ]
sports
Tokyo Olympics Day Three Round-Up: Team GB Enjoy A Magic Monday
It was a thrilling Monday for Team GB as the squad brought home five medals, including three golds, [ ... ]
sports
From Child Prodigy To Champion, Tom Daley Succeeds In Quest...
It has taken four Olympic Games, but Tom Daley finally claimed his first gold medal alongside Matty [ ... ]
sports
Tokyo Olympics Day Two Round-Up: Team GB Get Medal Tally Up...
There was finally some medal success for the Brits, a match to forget for the USA’s men’s [ ... ]
sports
Tokyo Olympics Day One Round-Up: Adam Peaty Through As GB Footballers...
As the sun sets on day one of the Tokyo 2020 Olympics, some of Great Britain’s finest athletes [ ... ]
sports
Is England Captain Harry Kane Worth £160m Or More To Tottenham...
Harry Kane to Manchester City. The transfer saga that looked certain to drag out through the summer [ ... ]
sports
Coronavirus Is Continuing To Play Havoc With The Sporting Calendar
The UK may have seen a considerable relaxation in Coronavirus restrictions, but the virus is still causing [ ... ]
sports
Jessica Ennis-Hill And The Other Home Favourites Who Won Gold...
The Tokyo Olympic Games is fast approaching and the eyes of the world will be on the Games that will [ ... ]
sports
Three Winners And Three Losers From Team GB After Tokyo 2020...
At long last, the extended wait for the start of the Tokyo Olympics is nearly over, and the hype is [ ... ]
sports
From Skateboarding To Speed Climbing, Five New Sports Making...
The Olympics are almost upon us and with a host of new sports making an appearance, our hype for the [ ... ]
sports
Ten Biggest Shocks In Summer Olympics History
Tokyo 2020 is now just a matter of days away and as we gear up to watch the greatest athletes on the [ ... ]
sports
Tony Hawk And His Legendary 900° Landing At The 1999 X-Games
The 2021 summer X-Games, the premiere competition for extreme sports, came to a close on Friday and [ ... ]
sports
Walker The Talker: Even Without Fans, The Magic Remains At The...
Well here we go then. Whatever people think about whether it could, should or would happen, Tokyo 2020 [ ... ]
sports
140,000 Fans Set For Silverstone - But How Have Returning Crowds...
As Covid-19 restrictions move ever nearer to being lifted, we have seen the slow return to normality [ ... ]
sports
Neymar, LeBron James and Federer: The Big Names Missing From...
Dan Evans is the latest British omission who will miss the Tokyo Olympics later this month having tested [ ... ]
sports
Walker The Talker: Olympic Games Will Be A Test Of The Body...
The unifying power of sport. Anyone watching that epic semi-final on Wednesday night couldn’t [ ... ]
sports
Tom Stoltman Becomes First Scot To Claim World’s Strongest Man...
Invergordon strongman Tom Stoltman became the first Scotsman to hold the title of World’s Strongest [ ... ]
sports
England’s Croquet Five Lions Conquer Scotland To Bring It Home...
It was all a world away from the frenzied hype of Euro 2020 gripping the nation. But on five beautifully [ ... ]
sports
The Hulk To ‘The Mountain’, Five Monster Moments From The World’s...
Since its debut in 1977, The World’s Strongest Man has become a beloved spectacle to hundreds [ ... ]
sports
From Indy 500 To Giro d’Italia, Here Are Five Sport Stories...
It’s been a busy weekend in the sporting world and whilst most of the talk might have been around [ ... ]