Teofimo Lopez returns to the ring this weekend to take on Pedro Campa. The super lightweight bout is Lopez’s first fight back since losing his unified lightweight title to George Kambosos in November 2021. Going into that shock defeat, ‘The Takeover’ was on top of the sport. Lopez was seen as a future pound-for-pound number one and, at the age of just 24, seemed well-equipped to lead boxing for the next decade. The reason? His stunning victory over the great Vasiliy Lomachenko.

Lopez had always been a supremely confident figure, but taking a bout with Lomachenko seemed far too brave. The Ukrainian was one of the finest amateurs of his generation, winning two Olympic golds and two World Championship golds in a decorated unpaid career. Since crossing over to the pro ranks, his only blemish was a controversial world title defeat in his second pro bout, against WBO featherweight boss Orlando Salido. Lomachenko beat Gary Russell Jr for the same title in his third professional bout, tying the record for capturing a world championship in the least amount of fights.

In the years since, ‘The Matrix’ had cut a swathe through three weight divisions. Lomachenko had 15 fights between his debut and his October 2020 bout with Lopez. 14 were for world titles. Throughout this period, ‘Hi-Tech’ was simply majestic. His calculated destruction of Guillermo Rigondeaux, his phenomenal stoppage of Jorge Linares, his demolition job on Anthony Crolla. Big names walked through the ropes to face Lomachenko, and they all walked out of that ring changed by the experience. By the time Lopez came knocking, ‘Loma’ was a three-weight world champion and the reigning WBA and WBO ruler at 135 pounds.

Lopez had just won gold of his own with a savage two-round knockout of Richard Commey. ‘El Brooklyn’ had won the IBF lightweight title with that impressive victory, While Commey was seen as a solid fighter and a deserving champion, Lomachenko was viewed on another level altogether. The Ukrainian Olympian was seen as the natural successor to Floyd Mayweather on the pound-for-pound throne.

On the night, behind the COVID-enforced closed doors of the MGM Grand Conference Center in Las Vegas, Nevada, one man did emerge as a possible pound-for-pound leader. That man was Teofimo Lopez. The younger man started strong, establishing his jab and working over Lomachenko’s body to slow the usually-rapid champion down. 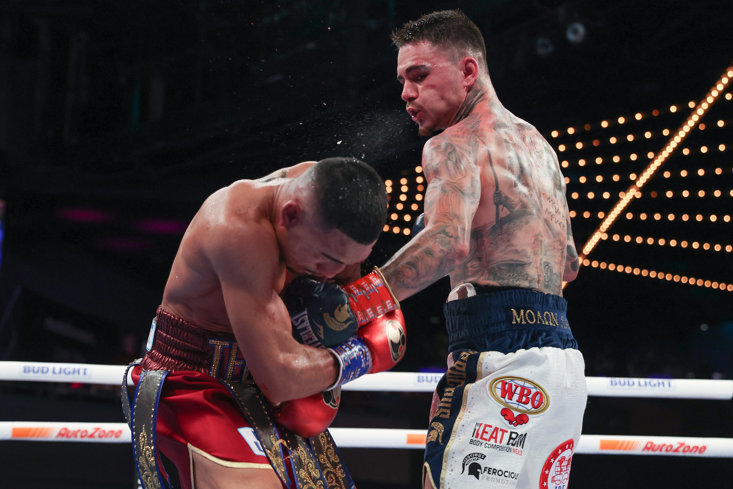 kambosos had too much for lopez last time out

Loma came on stronger as the bout went on, landing more punches but still not commanding the ring like he had in the past. The final round typified the brilliance Lopez had shown, with ‘El Brooklyn’ landing 50 punches on his opponent. This was the most punches Lomachenko had ever shipped in a single round. The scores of 116–112, 119–109 and 117–111 perhaps flattered the victor, but Lopez was a deserving unified lightweight champion.

The victory was supposed to propel Lopez into the stratosphere. A big money fight with George Kambosos Jr was set up, with Triller paying $6 million to stage the bout. Lopez tested positive for COVID-19, leading the fight to be pushed back. There were additional delays when Triller, who made their name in hosting a number of the YouTube boxing cards, tried to change the venue. The controversial platform eventually defaulted on their contract, and the bout fell into the hands of Matchroom Boxing.

Of course we now know the troubled build-up did not stop there for Lopez. He was outboxed in a courageous performance by Kambosos. On the night, his father Teofimo Lopez Sr served as his trainer. His rudimentary instructions and skewed view that his son was leading on the cards caused many to blame him for Teofimo’s loss.

Lopez must now put that behind him. The Lomachenko victory showed the heights to which his talent can take him. The fighter that dazzled against one of the supreme boxers on the planet is still within Lopez. The Campa fight is his first opportunity to demonstrate that he still knows how to summon his best self.