Boxing
News
Five iconic lightweight fights to get you in the mood for Lopez vs Kambosos.
Joey Mills
13:35, 26 Nov 2021

Teofimo Lopez and George Kambosos Jr finally step into the ring on Saturday in a blockbuster lightweight showdown. The WBA IBF, WBO and The Ring championships will be at stake in New York in a battle of two unbeaten 135-pounders.

Lopez is coming off a thrilling unification victory over Vasiliy Lomachenko. At the age of just 23, his performance in upsetting one of the pound-for-pound best fighters in the world dazzled boxing audiences. Due to a litany of delays, he has been out of the ring since that victory in October 2020. Kambosos has suffered a similar delay, having beaten Lee Selby in the same month as Lopez’s last bout.

This hotly-anticipated clash promises the sort of fireworks only world class boxing can provide. To get you in the mood, here are five memorable lightweight title fights to whet your appetite.

Tough Scotsman Buchanan was the universally recognised lightweight king when he defended his WBA and The Ring straps against a Panamanian whirling dervish by the name of Roberto Duran. Their fight, in the bristling Madison Square Garden atmosphere, was ferocious and intense.

There were fouls aplenty as the two 135-pound hard-men engaged in a war of particularly brutal attrition. Buchanan more than held his own with a man who would go on to become one of the sport’s all-time greats, but eventually he succumbed via 13th round stoppage. To this day, many claim the blow that took Buchanan out was below the belt.

Watching Ray ‘Boom Boom’ Mancini give a peak Alexis Arguello at just 20 years old is scarcely believable. The bravery, spirit and energy of the second-generation boxer from Ohio makes this fight required viewing. The chance to see a titan of the sport like Arguello made to fight to his maximum capacity is always a thrill, and the way the more experienced champion eventually breaks down the upstart is masterful.

After the fight, the gracious champion promised interviewers that Mancini would become a champion one day. The Nicaraguan was spot on, Mancini would claim the WBC championship in less than a year later.

This rough and tumble unification fight for the WBC and WBO titles is in with a shout of being the greatest fight of the last twenty years. The frightening punch volume and complete abandonment of defence by Corrales and Castillo made for one of boxing’s most visceral spectacles.

Nine rounds of gut-wrenching action gave way to one of the greatest finishes you are ever likely to see in a prize ring. Castillo knocked Corrales down at the start of the tenth session. ‘Chico’ spat his mouthpiece out and rose from the canvas. He was knocked down again only seconds later, and looked on the brink of a third career loss. Corrales spat his mouthpiece again, incurring a point penalty for doing so.

When the action resumed, the American landed a mammoth right hand that turned the tide, before stopping his Mexican foe along the ropes with a barrage of shots. Ten rounds of savagery punctuated by a thunderous comeback. Boxing at its finest.

WBC lightweight champion had already exorcised a ghost of Pacquiao’s past, beating Erik Morales, one of three men to defeat the Filipino at the time. As ridiculous as it may seem in hindsight, many thought a world title in a fourth weight class may be beyond Manny, who had won his first belt at flyweight.

Not for the last time, Pacquiao made a mockery of his doubters. The magnificent ‘Pac-Man’ left Diaz beaten and bloodied, outmuscling the champion and leaving a nasty gash above his right eye. A left hand in the ninth round left Diaz down face-first on the mat, with the referee immediately waving off the fight. 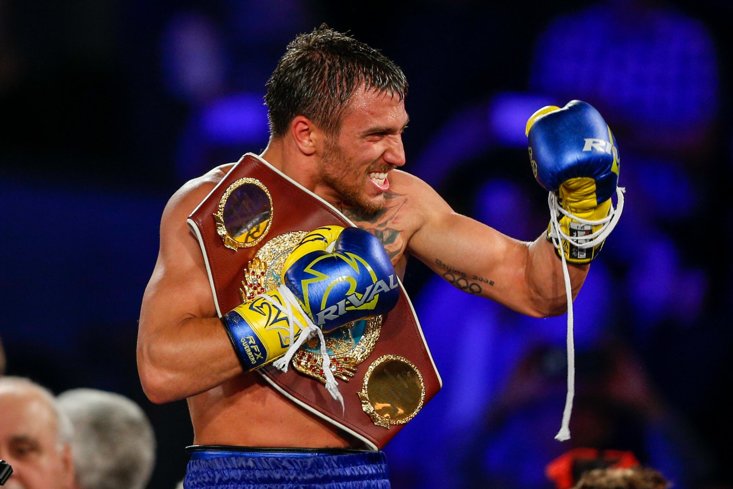 Lomachenko already had nine world title fight wins in just eleven career fights when he moved up to lightweight. The Ukrainian phenom was a two-weight world champion looking to annex a title in a third weight class. Standing in his way was Jorge Linares, the utterly dominant WBA and The Ring lightweight champion.

Linares was well known to UK fans for his wins over Anthony Crolla, Kevin Mitchell and Luke Campbell. A great fighter, he met his match in the ring with ‘The Matrix’. Lomachenko was knocked down in the sixth round, but battled back to secure a tenth round stoppage with a brutal body shot. He would defend the championship three times before losing it to Lopez.