It’s game week and the 150th Open Championship is underway with practice rounds for the greatest players in the world to get their teeth into the oldest golf course in the world. Golf is a complex game at the best of times, but whether you’re a casual newbie or a veteran, everyone needs a reminder of how special the Old Course is.

You can take in the nuggets of knowledge and disperse a verbal assault of intellect on any stranger that you might need to impress during the next 72 holes from Thursday to Sunday. Or you can just watch it and breathe slightly heavier through your nose when you recognise the famous bridge on the first hole.

To begin, it’s important to remember how The Open is referred to. The British Open, The Open and The Open Championship are all official names of the contest, and its tagline describes it as ‘the oldest golf tournament in the world.’

The Open is now only contested on ‘links’ courses as opposed to parkland and heathland courses. Links golf is played on the coastal regions of the UK, however Scotland is primarily known as the home of links golf thanks to their selection of historic courses that were built on the shores many years ago. The Old Course at St Andrews is considered to be the first golf course in the world, which hosts the landmark 150th event this year. 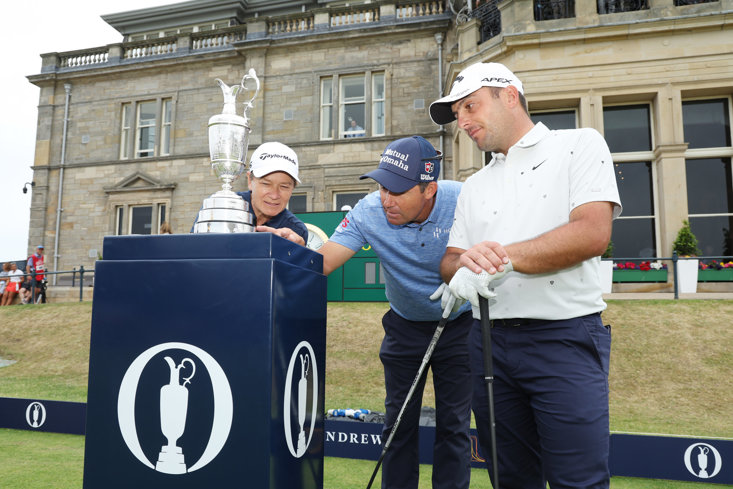 The course itself is widely regarded as the most iconic course of all-time. Landmarks are everywhere to be seen both in-person and through broadcasts. At this time, there’s 112 bunkers in-play on the course and most of them have a name relating to people of the past or events that happened to people in the location at the time.

Notable bunkers include The Beardies on the 14th hole, two bunkers that are notoriously difficult for the groundskeepers to mow, the stroke bunker, where if you land in it, you’re almost guaranteed to lose a stroke, and Hell, a bunker that doesn’t really need explaining. It’s ten feet deep and covers 300 square yards, so good luck getting out of that one.

The front nine and back nine holes have two different colour flags, with the first nine being white and the back nine being red, apart from the 18th hole which has a white flag due to the red-bricked Hamilton Grand apartment block in the background. Back in the 19th century, white flags meant you were going out and red meant you were on your way back in.

If you’re talking greens, there are only four holes that have their own space for putting. The 1st, 9th, 17th and 18th have their own greens, but the rest of the holes on the course have to share green space, often creating monster-length putts that get the crowd going if they end within 5 feet.

Off-course landmarks are scattered throughout the course, but as a round draws to a close, you’ll spot more and more as you go. On the 17th, the Jigger Inn overlooks play, with Justin Thomas hitting the pub with a shot during a practice round last weekend, much to the amusement of his playing partner Tiger Woods. Many former champions have lifted the Claret Jug alongside a Tennants (other brands available) in the pub that dates back to the 1850s, and long may it continue.

Elsewhere, The Old Course Hotel is also visible on the right of the 18th fairway, a behemoth sitting on the horizon of the home of golf, with balconies aplenty to view the action. However, they do cost a pretty penny. Rusacks Hotel and the previously mentioned Hamilton Grand apartment block ambush the 18th green.

If you ever get to play the course, the holes are packed with character, stories and challenges to get stuck into. The first hole sees you navigate over the Swilcan Burn, where a bouncing drive or draw might give you trouble. Hole six introduces you to ‘Coffin’ bunkers, which are pretty much what it says on the tin - bunkers in the shape of coffins scattered around the fairway that can be difficult to get out of.

Hole 14 has the bunker named ‘Hell’, hole 17 famously has a road going through it and is referred to as ‘The Road Hole’, accompanied by the bunker named ‘Sands of Nakajima’ and the final green of your round sees you navigate a depression called ‘the Valley of Sin.’ 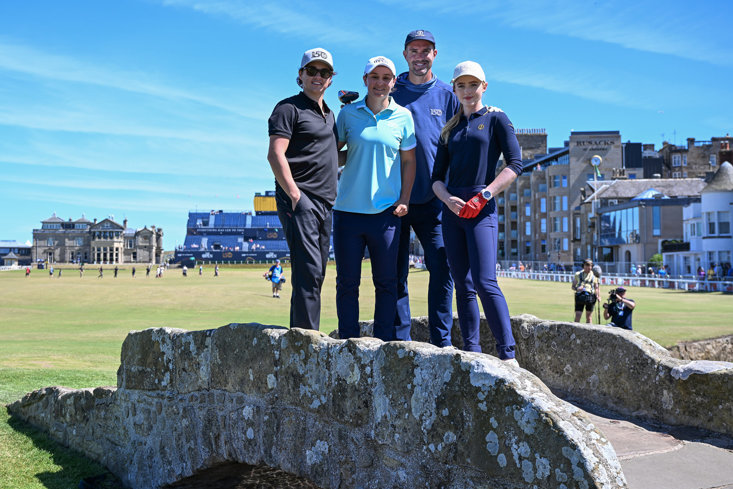 While you’re there, don’t forget to take a picture and pay tribute to the Swilcan Bridge like many former champions have done before. Jack Nicklaus officially retired back in 2005 and in 2010, Tom Watson kissed the bridge before crossing.

Finally, the famous R&A clubhouse is not only the venue for some post-round drinks and celebrations with the world’s finest players, but also the home of the rules of golf. The Royal & Ancient (R&A) control the game of golf and work with the Professional Golfers Association (PGA) in the creation of tournaments and keeping everyone on the same page, from professional to amateur levels.

x
Suggested Searches:
The Sportsman
Manchester United
Liverpool
Manchester City
Premier League
More
golf
Luke Donald Confirmed As Europe's Captain For 2023 Ryder Cup
Luke Donald has been named Europe’s Ryder Cup captain, replacing Henrik Stenson who was sacked [ ... ]
golf
LIV Golf: The Players Who've Made The Switch And Those Who Haven't
LIV Golf arrived into the world of golf with a whimper, followed by a bang. After initial sniggers from [ ... ]
golf
Cameron Smith Refuses To Rule Out LIV Golf After Open Victory...
Cameron Smith had one of the comebacks of the year on Sunday at St Andrews, going -8 under par for the [ ... ]
golf
Cameron Smith Wins The 150th Open Championship On Dramatic Final...
Cameron Smith has won The 150th Open Championship after a nail-biting finale at St Andrews. The title [ ... ]
golf
McIlroy & Hovland Share The Lead: Day Three At The Open Championship
All eyes were focused on the duel between Norway’s Viktor Hovland and Northern Ireland’s [ ... ]
golf
Tiger's Farewell Tears And Smith's Putting: Day Two At The Open...
Three-time champion Tiger Woods was left in tears at the end of his round on day two, in what he thinks [ ... ]
golf
McIlroy's Promising Start And Tiger Tees Off: Day One At The...
Rory McIlroy enjoyed almost the perfect opening round to his Open. The 2014 Champion Golfer of the Year [ ... ]
golf
WATCH: Ian Poulter's Extraordinary 160-Foot Putt On The Ninth...
Ian Poulter might have already made one of the putts of the tournament at the 150th Open Championship as [ ... ]
golf
Easy Tiger: The Top Five Open Championship Wins At The Old Course
Snead. Nicklaus. Woods. All of the greats have lifted the Claret Jug outside the famous Royal & [ ... ]
golf
Tiger Woods Says LIV Golf Defectors ''Have Turned Their Backs''...
Tiger Woods has waded into the PGA Tour’s feud with the controversial LIV Golf Series to reiterate his [ ... ]
golf
The 150th Open Championship: McIlroy Favourite As Golf Returns...
Words fail to describe the beauty of Scottish links golf. Greens the size of islands, filled with twists [ ... ]
golf
The Open Championship's Prize Pot Increases By 22 Per Cent
The winner of the 150th Open at St Andrews next week will receive a championship-record £2 [ ... ]
golf
Bryson DeChambeau Hopes People Can See The 'Good' Saudis Are...
LIV Golf star Bryson DeChambeau has said that he wants people to see the ‘good’ that Saudi [ ... ]
golf
The DP World Tour Bans LIV Golf Players From The Scottish Open
The DP World Tour has handed out £100,000 fines to all the players who competed in June’s [ ... ]
golf
R&A Confirms LIV Golf Series Stars Will Be Invited To The Open...
The Royal & Ancient Golf Club has confirmed that players signed up to the LIV Golf Series will be [ ... ]
golf
US Open Preview: European Stars Can Dominate The Top Ten
After weeks of folie à deux in the world of golf, the world’s finest players return to [ ... ]
golf
Rory McIlroy And Linn Grant Weekend Wins Overshadow LIV Golf...
The inaugural LIV Golf event at London’s Centurion Club was left in the dust on Sunday thanks [ ... ]
golf
The Troublesome Timeline Of LIV Golf: How Did We Get Here?
The most controversial topic in sport right now, the LIV Golf tournament, teed off on Thursday after [ ... ]
golf
Dustin Johnson's Defection Could Change Not Just Golf But Sport...
To call Dustin Johnson’s withdrawal from the PGA Tour on Tuesday “seismic” would be [ ... ]
golf
Everything You Need To Know About The 2022 PGA Championship
‘This is Major’ is the PGA’s chosen slogan for their flagship major event, as the [ ... ]
golf
Betfred Donate £19,000 To Prostate Cancer UK After Danny Willett...
Thorbjørn Olesen may have walked away with the Betfred British Masters title over the weekend, [ ... ]
golf
Betfred British Masters: Thorbjorn Olesen Triumphs With Spectacular...
Thorbjorn Olesen clinched the Betfred British Masters title with an incredible 35-foot putt on the 18th [ ... ]
golf
Thorbjorn Olesen Three Clear Heading Into Final Day Of Betfred...
Following a miserably wet Friday, the sunshine returned to The Belfry on Saturday as round three of [ ... ]
golf
Hurly Long And Danny Willett Shine On Day Two At Betfred British...
It was another action-packed day at The Belfry in Sutton Coldfield for day two of the Betfred British [ ... ]
golf
Great Danes Enjoy Profitable Opening Day At Betfred British...
If watching Christian Eriksen run the show in the Premier League wasn’t enough, now several other [ ... ]
golf
Everything You Need To Know About The Betfred British Masters
The British Masters is upon us and Danny Willett has chosen The Belfry again as the host for one of [ ... ]
golf
Phil Mickelson Plays Both Sides As Golf’s Civil War Begins
Phil Mickelson, American golf hero and people’s champion left many fans flabbergasted by [ ... ]
golf
Lazarus With A Five Iron: Tiger Roars Back At The Masters On...
On April 14 2019, the weather was looming ominously in Augusta, Georgia. The only thunder that ultimately [ ... ]
golf
Scheffler Shines, Rory Reborn & Tiger Returns: 5 Things We Learned...
Scottie Scheffler's stunning season continued this weekend as he clinched the first major of his [ ... ]
golf
Tiger’s Greatest Triumphs: Three Times Woods Defied All The...
You simply couldn’t write the life of Tiger Woods. A man that has seen it all, won the lot and [ ... ]